22 September, awake suddenly in the dark, the sound of rain pummeling on metal roof. An insistent wind swelled the curtains at my open west window, filling the room with the scent of wet grass.

After a moment I gathered my wits, heaved myself from my warm nest and trudged around the end of the bed, feeling the prickle of rain against my wrists as I lowered the window.

The cats immediately acknowledged that I was at least out of bed if not quite ready to meet the day, so no choice but to poke about for my slippers and make my way to the kitchen, kittens tumbling at my feet trying to catch the trailing ends of my bathrobe sash.

Jim drove off through the rain having rented a mammoth bulldozer to clear some lots, Dawn was at work; Matt and Gina rounded up neighbors and drove to the Casey County Produce Auction a favorite destination this time of year,

I sat at my desk loading photos in a desultory manner. The phone rang, Matt requesting my presence for lunch at the Bread of Life Cafe.

Rain streamed in torrents against the car's windshield, the wipers slashing madly at full tilt. The parking lot when I arrived was slick with puddled rain. Howard had also been summoned; when he arrived we were ushered to a large family-sized table. Soup of the day was beef stew which I ordered with my favorite marinated chicken breast, grilled and served on a soft roll. Others opted for the buffet of southern style favorites along with the salad bar. 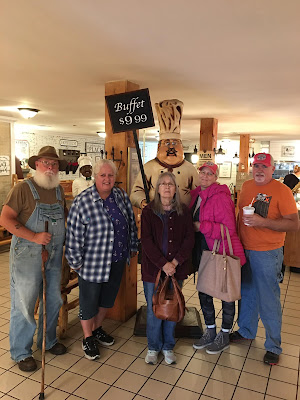 Howard chose to take this photo with Gina's phone rather than pose with the group. 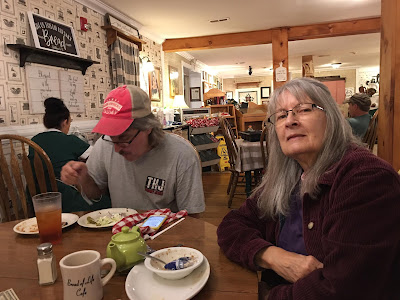 I don't like photo ops, was caught in protest mode, while Howard kept his attention on his plate. 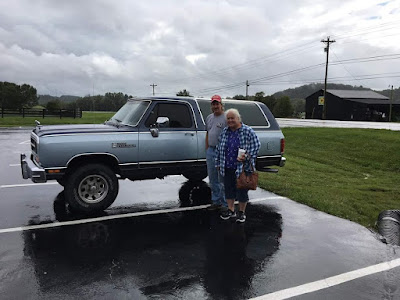 Betsy admiring Howard's vintage Dodge Ram.
Betsy and Gary were our neighbors in Gradyville during our first years in Kentucky, but weren't sure of the location of our new home. Gina and Matt led them there, where we found Jim had returned, shed soaked clothing for a hot shower and dry attire. The rain slacked off as we sat companionably talking, the kittens moving from one warm lap to another. 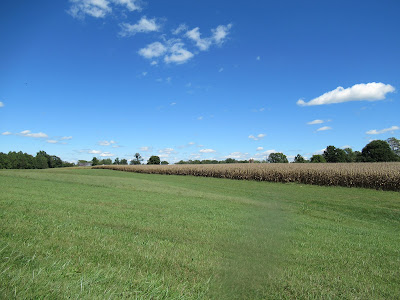 The line storm that arrived with the autumnal equinox gave way to blue skies.
I repeat in my mind the phrase 'autumnal equinox' always having enjoyed the roll of the syllables and the memories conjured. 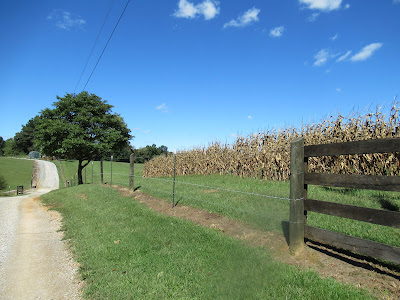 The lane that leads from the main road past a cornfield awaiting harvest. 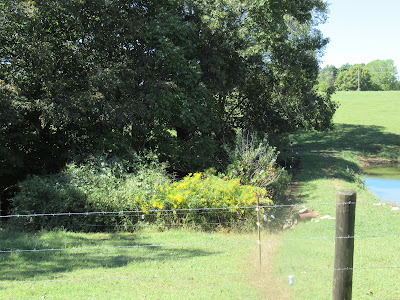 The pond on the opposite side of the lane. Goldenrod spills from the edge of the woods. 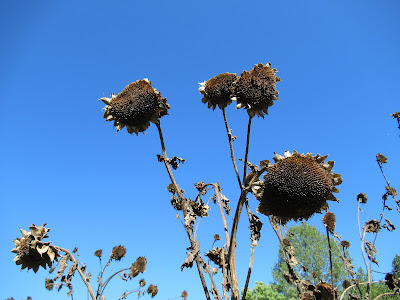 Gold finches picked out the sunflower seeds and have mysteriously departed leaving the gaunt stalks to rear against the September sky. 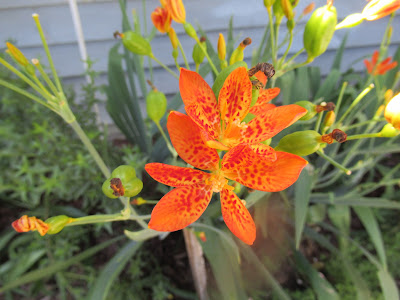 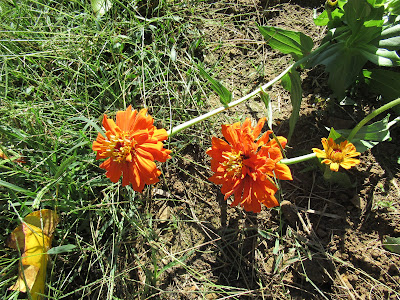 Ragged zinnias flattened by the equinoctial storm,
I'm familiar with many of the poems of Robert Frost, proudly claimed by my home state of Vermont. This is one I'd never read prior to finding it online.
Those of a certain age may recall his attempt to read an essay or poem specially prepared for the inauguration of John F. Kennedy.
It was an outside venue, a cold January wind whipping the elderly poet's white hair, a relentless sun glaring off his spectacles.
The paper in his hand flapped and shook, unreadable.
With considerable aplomb he laid aside the 'Dedication' written for the event and spoke from memory, another of his poems, 'The Gift Outright.'
Frost often wrote of rural scenes referencing a countryman's knowledge of season and place.
We return to his poems to appreciate his underlying humor, pathos, quiet wit and his evocative gift of words.

The road is forlorn all day,

And the hoof-prints vanish away.

The roadside flowers, too wet for the bee,

Expend their bloom in vain.

Come over the hills and far with me,

And be my love in the rain.

The birds have less to say for themselves

In the wood-world’s torn despair

Than now these numberless years the elves,

Although they are no less there:

All song of the woods is crushed like some

Come, be my love in the wet woods; come,

Where the boughs rain when it blows.

There is the gale to urge behind

And bruit our singing down,

And the shallow waters aflutter with wind

From which to gather your gown.

What matter if we go clear to the west,

And come not through dry-shod?

For wilding brooch shall wet your breast

To the ancient lands where it left the shells

Before the age of the fern;

And it seems like the time when after doubt

Our love came back amain.

Oh, come forth into the storm and rout

And be my love in the rain.

Posted by Morning's Minion at 2:05 PM