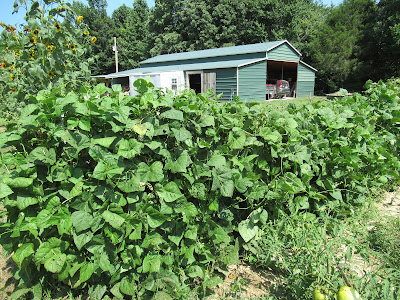 It has been by all comparisons a mild summer; sufficient rain for gardening, temperatures hovering in the mid 80's--that is until the final week of July. Those days and nights reminded us of the punishing effects of heat and humidity.
T-storms moved noisily through in the earliest hours of the 30th bringing rain that refreshed with moisture if not with coolness.
August has arrived in a mellow mood. The shortening of daylight  hours is noticeable, and evenings when I go out to water the container plants and the new raised bed have a sleepy quiet marred only by the chirring of cicadas.
Above you see the green bean trellis, an innocent appearing tangle of vines. I was side-lined at garden planting time so Jim took that over using a wheeled contraption fitted with disks slotted for different sizes of seeds. We are concluding that in most cases the seeds are spun into the row too thickly.
Thus with the green beans [Blue Lake Pole variety.] The seeds were slow in germination, then climbed the trellis and wound downward through the mesh, tangling and inter-weaving. A few beans appeared and I picked them, noting that they weren't of best quality.
Mid-morning on Sunday I decided that I couldn't ignore the need to paw through the welter of leaves and stems to salvage a harvest.
I set about the task clothed in jeans, wellies and a long-sleeved denim shirt. I had to rummage for beans amidst the vines, lifting up the ones that had cascaded back toward ground level.
Indoors again I shed the denim shirt and sat down for a minute with a glass of iced tea.
A strange slight tickling sensation on my right wrist caught my attention and close scrutiny revealed several moving things no larger than the dot at the end of a sentence. Suspecting some sort of spider mites had hitched a ride on my clothing I hastily showered and washed my hair.
Sadly, by Monday morning I was in misery from myriad insect bites and more have since popped out.
Chiggers? Spider mites?
A google search gives the helpful information that while all chiggers are mites not all mites are chiggers.
Several showers and shampoos later liberal applications of calamine lotion, benedryl gel, rubbing alcohol, have not lessened the discomfort.
Like all such pests these travel to waistbands, collars, armpits, anywhere flesh is soft and warm.
I will spare you photos of lotion-daubed welts on aging skin!
The most violent itching and stinging is said to subside after three days, although the scabby bites will continue to be an irritation for about two weeks.
If you've not personally experienced the misery of chiggers, pray that you do not!
They are the sort of plague to be uncharitably wished upon someone you intensely dislike. 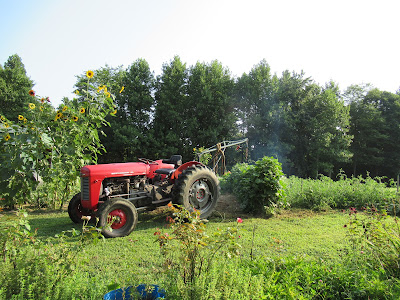 For whatever reason, Jim, after asking if there was any way to save the bean vines,
backed a diesel tractor aimed at  the trellis and allowed it to sit there bellowing fumes.
I doubt it will banish the mites, but neither of us intends to touch the tangled mess of vines again.
Also on Sunday I planted a row of bush beans for a fall crop.
A pox on vines and insect pests! 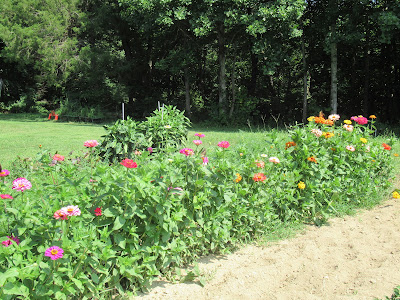 On a pleasant note, the zinneas are in bloom. I always plant a row for the blaze of outrageous color at the season when prettier more delicate blooms have succumbed to the heat. 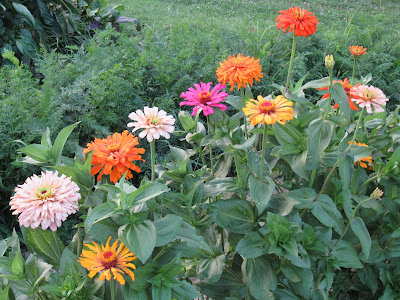 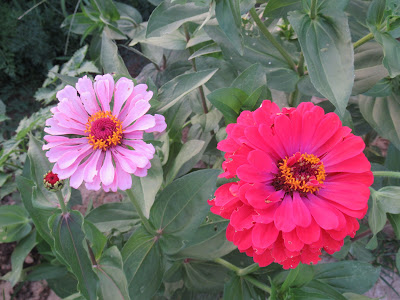 The wild colors should clash, but somehow they mingle agreeably. 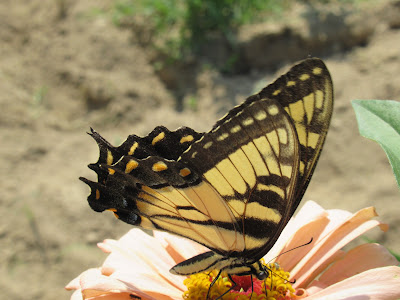 Zinneas are beloved of butterflies. 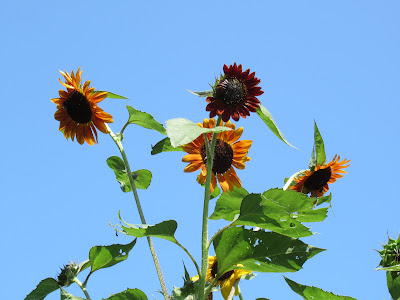 The sunflowers are slightly past their prime, but still standing, a boundary at the edge of the garden 'L.' 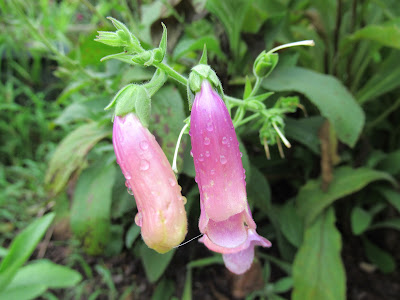 A slight second flowering of foxglove along the west retaining wall. 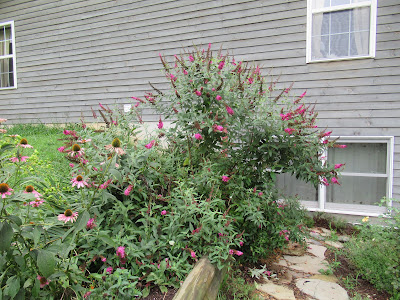 The butterfly bush was labeled 'dwarf' but has been inspired by the purchased soil in the raised bed.
This Monday morning was cool, 66 F at 7 a.m. and the noon temperature has swelled to 80. There is a slight breeze--a fine day for pegging out the laundry.
I have been tweaking the arrangement of the big room downstairs, setting up two sewing machines, bringing out quilting projects that have been neglected for some time.
It is a pleasant space, a retreat from some of the annoyances of the day.
I am headed there now with a glass of fresh iced tea and a tube of benedryl gel.
I hope sewing will help divert my attention from all the bites I shouldn't scratch.
Posted by Morning's Minion at 1:42 PM