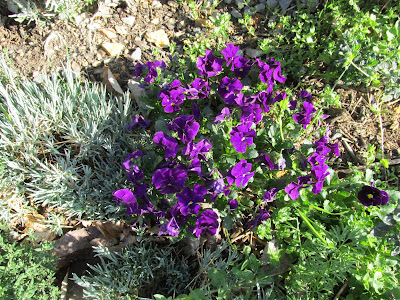 A clump of violas established when seeds fell from a pot of them that held up all winter under frost and snow. 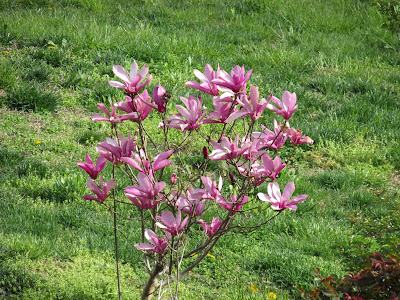 'Jane' magnolias were in full bloom when several nights of frost hit late in March. 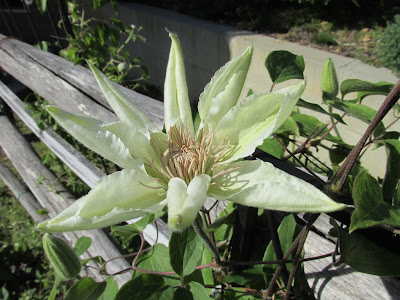 My favorite clematis was in tight bud at the time of the cold nights. I feared the blooms would be damaged but the first three have opened this week.
This is the heirloom variety 'Candida' a root taken from an old vine at our first Kentucky property and planted at the Amish farm. When we sold the farm in autumn, 2018, I dug up part of the clematis and wintered it in a huge pot.
I've had other clematis varieties, and three new ones to be set out; this is my cherished favorite. 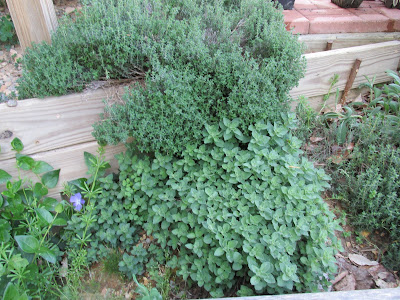 Fresh growth of a decorative oregano and a bushy thyme spilling out of the raised bed by the front steps. The thyme grew from a seed that fell into a potted plant set along the cement walk at our Amish farm. 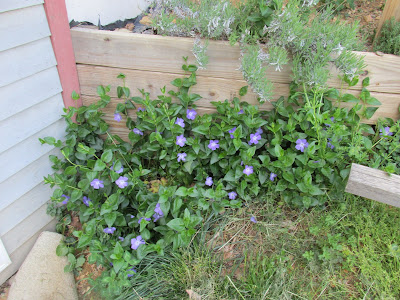 This is a dry and difficult corner between the house wall and the front porch. I've tried several plants there that didn't flourish. Roots of vinca contributed by Gina have settled happily and established a colony that may have to be restrained. 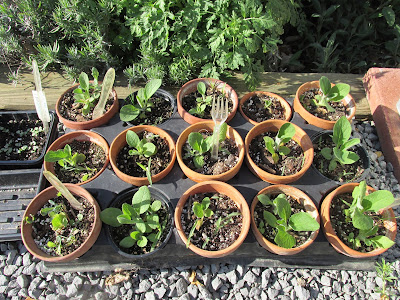 Foxglove babies that were lifted from the west wall garden and potted up in late February.
Howard moved them to the front walk where they are growing on. In one pot a poppy seedling has popped up.
Other small containers of seedlings were placed in a black plastic flat to harden off. The wind blew all day Sunday and late in the afternoon I looked out to see that the flat had been blown down the lawn and the little pots of seedlings scattered, I was able to scoop up and salvage several containers but two were completely overturned and the tiny plants lost. 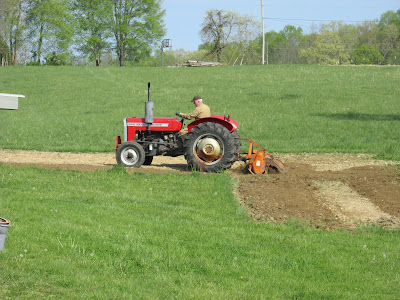 Jim acquired another Massey Ferguson tractor yesterday and the cultivator was part of the deal.
He is liking this tiller better than the other one he owns, so this may be a 'keeper.' 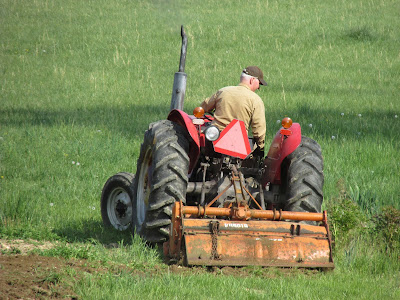 The veg garden was plowed in November and enlarged from its original space.
It seems that gardens must be reimagined every season. We're thinking smaller, more frequent sowings of things we enjoy fresh. 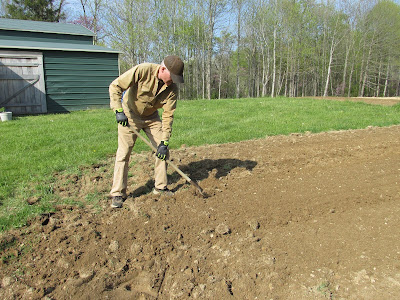 I was summoned to admire the depth and texture of the freshly tilled plot.
Each season shows improvement as stones are removed and sod broken down. 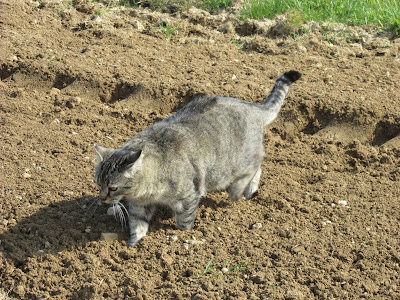 Willis feels duty bound to plod through the soil and offer his opinion. 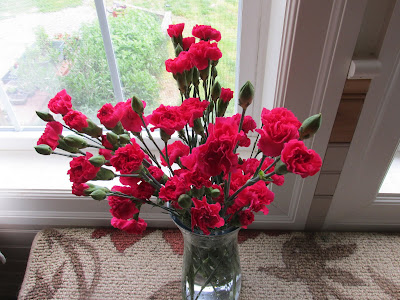 Jim went to Wal Mart to replace his broken wrist watch. This bouquet of miniature carnations came home with him.  They are worthy of a more formal arrangement, but pretty even as they fell into the vase. I think they must spend the night in the sunroom to be safe from Shelby the Kitten,
I've been side-lined from my usual projects since the last weekend in March.
The short version of the story is that a blood clot [DVT] landed me in the ER and I was admitted to hospital and remained there for 48 hours tethered to an IV drip of heperin.
I was discharged home on medication and remanded to days in Jim's big recliner with my leg boosted on cushions.
Beyond the windows the redbud and dogwood flowered, leaves filled out on trees along the lane; emerging perennials poked through drifts of old leaves--and the weeds I'd been battling rampaged without restraint.
Jim has been competently at the helm, family and good friends have supplied good food, prayers and kindly encouragement.
I am now allowed to move about with frequent returns to my chair.
I am not allowed to crawl about on my knees weeding the garden!  All other tasks are to be undertaken in MODERATION!
At long last I may be ready to concede that moderation is a healthier place than determination to plow through in spite of fatigue.
The hummingbirds have returned, clematis are blooming, wild violets lurk in the grass. I don't yet know how I'll manage weeds or whether I'll have the stamina to create the new garden under the bedroom window.
I do know I'm blessed to be here, recovering, and with much to enjoy.
Posted by Morning's Minion at 9:30 PM