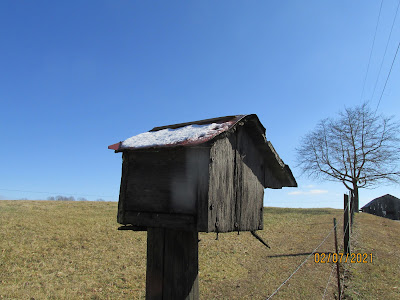 I need the reminder that there have been a few sunny hours this month!  Most morning temperatures have been below the freezing mark without much moderation through the day.
There has been intermittent drizzle, frost and a chilly wind that stings my face on the way to and from the mailbox.
A scrim of snow remained on our neighbor's north-canted birdhouse roof after a sunny afternoon melted the light dusting that clung to the lane and the edges of the ravines. 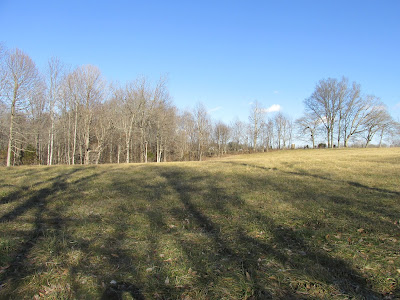 On a sunny day there is still the suggestion of green beneath the bleached tawny hues of the meadow grass. 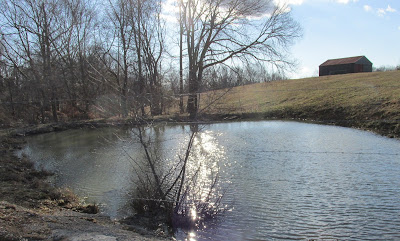 A path of sunlight across the pond. 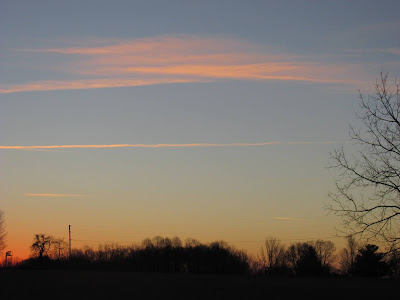 A sunrise stained with ochre and pale rose soon faded into another day of pewter clouds. 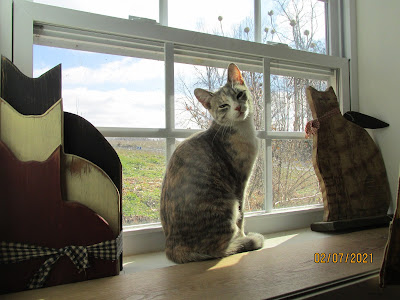 I've spent several afternoon hours downstairs in the big living room, resolutely finishing the quilt blocks for a project that seemed like a good idea at the time. I turn on the heat, select some CD's, putter back upstairs to fetch a mug of tea, lay out the colorful patches beside the sewing machine.
Shelby is basking in a spill of sunlight on the windowsill, posing with the wooden cats. 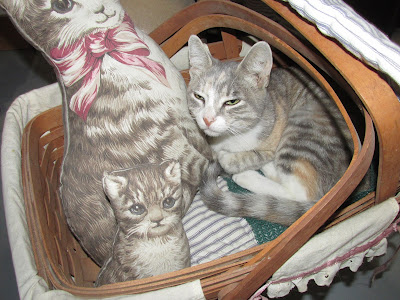 Shelby cuddled in a basket with fabric cats for company. 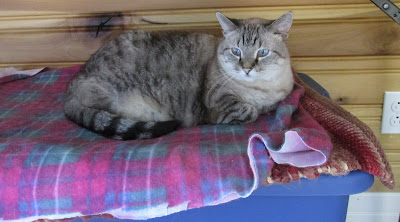 Teasel likes this spot under the plant table in the sunroom.
Its a pleasant nook when the afternoon sun streams in. I moved one of the basket chairs out there as a place to escape with a book and a mug of tea--but only if the sun shines. 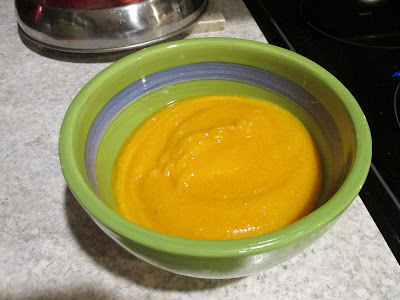 The last two butternut squash became a comforting creamy soup--made with coconut milk, a dash of curry. a dollop of butter. 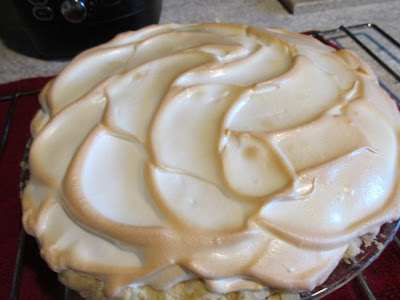 Lemon meringue pie inspired by a friend's gift of fresh eggs.
I drove to the South Fork shops on Tuesday, needing ingredients for salads. Of late mealtimes have gotten scattery, Jim wanting 'breakfast' at a later time than I do. It results in each of us rummaging in the fridge for something to warm up, or getting out eggs, canned fruit, cottage cheese.
Jim fries up great messes of eggs, potatoes, beef hot dogs--takes them to eat in front of his TV.
It makes for a rather constant clean-up in the kitchen.
I hope that some sort of schedule will resume with warmer weather. 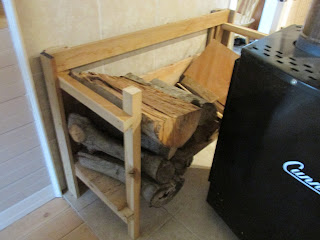 I wondered what Jim was planning when he gathered up some lengths of lumber which have been lurking in my craft storage room downstairs. The rack for firewood which he created is a much tidier option than the clutter previously around the stove.
Cold rain overnight, a skim of crackly ice on the front steps.
I walked down to the cat litter dump, my boots skittering on icy leaves, hearing the crunch of frozen grass along the edges of the lane.
It was late afternoon before I went to the mailbox, choosing a time when the drizzle of rain had slacked off. Temperatures that hover near freezing are mild compared to those of long winters in New England and Wyoming--still I'm happy to come inside from the cold, to pass the hours in desultory puttering.
I bring a seed catalog to the table with my lunch, a pen to circle the items of interest.
I hope for a mild sunny afternoon to do a bit of pruning, to prod at the cold earth in anticipation of a new growing season.
Posted by Morning's Minion at 10:07 PM