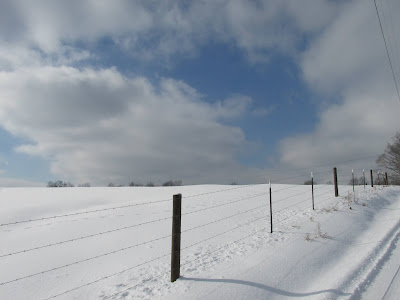 By Friday the snow of the week had stopped, leaving us with a landscape that sparkled under a returning sun. The rather perilous walk up the lane to the mailbox in freezing temperatures gave me a few minutes of exercise and bitingly fresh air, but no mail, as once again our rural route was considered too hazardous for the carrier to make his rounds. 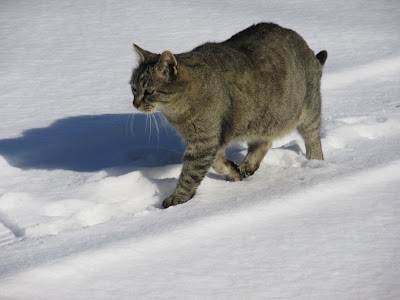 Regardless of the weather faithful Willis trudges with me to where our curving driveway meets the lane. He waits to escort me back to the house. 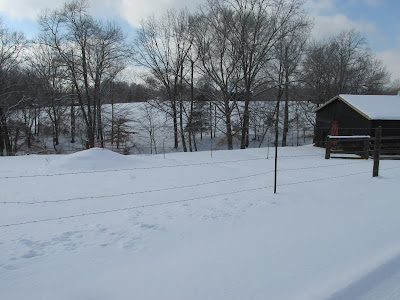 Near the head of the lane overlooking our neighbor's barn.
On Friday evening, switching off my bedside lamp at about 10, it took a moment for me to realize what I was seeing--a spill of moonlight across my bed, stars in the night sky.
After so many dark cold nights, the reappearance of these celestial familiars was so inspiring that I clambered back out of bed and navigated carefully around furniture to stand at the window, delighting in the glow of the half moon reflecting onto the unmarred white expanse of the west meadow.
Saturday was still cold, but the sun was a constant presence.
The small south-facing sunroom was warm enough for me to retreat there mid-afternoon with a mug of tea, a book, and Edward-cat to share the basket chair. 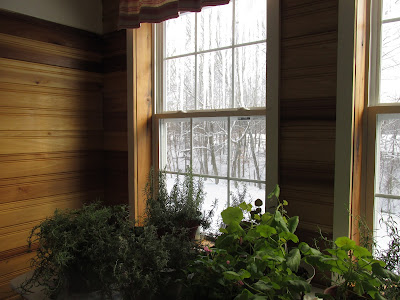 The heavy fringe of icicles along the roof edge began to melt and drip--slowly at first, increasing as the late afternoon sun beat against the house.
Shelby-Kitten stationed herself on the windowsill behind the Norfolk Pine, smacking at the glass with her small paws, trying to catch the streams of water on the outer panes.
Every few minutes an icicle gave way with a tiny shatter of sound. 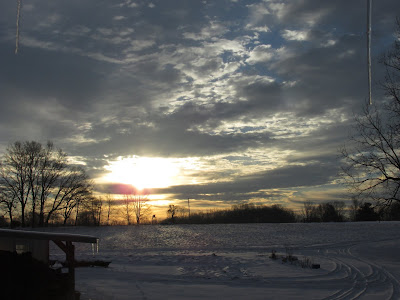 An encouraging sunrise on Sunday morning. 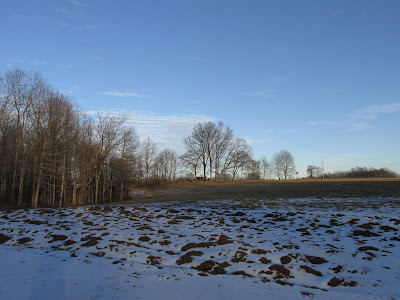 By early-afternoon the east meadow was clear of snow, but the ridges of turned earth in the vegetable garden still held the cold. 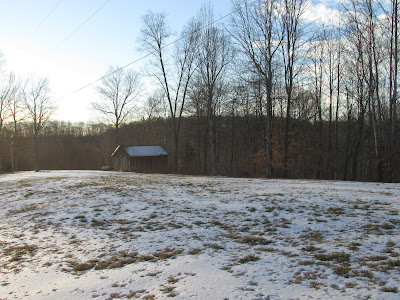 Edward-Cat who is lazy and dislikes to exert himself, made one of his infrequent forays outside, traipsing down to the old shed near the western end of our property.
During the long winter when our house was under construction, we lived in a camper/trailer parked across from the shed.  Edward, on warmish days, enjoyed basking on the concrete slab in front of the building. When we moved at last into the new home, Edward often wandered to the shed needing to be coaxed back in the evening.
By 3 p.m. the temperature had soared to 56 F. Rounding up Edward was a perfect excuse to be outside!
J. followed me down the meadow, heard Edward 'answering' our calls from under the building, but the silly cat refused to emerge.
Impatient, J. went inside and thumped on the floor, which caused Edward to rush from under the shed at full speed and hurtle down the ravine.
[Had J. gone along about his business I expect Edward would eventually have responded to my coaxing and come out.  He is a cat of fuzzy wits and ponderous deliberation.] 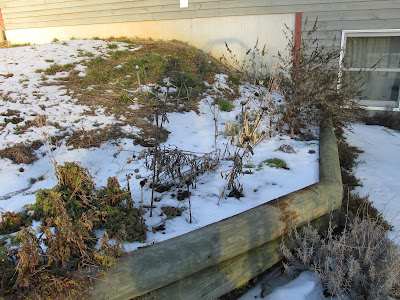 I decided to stay outside.
The snow had lost its clean sparkle, was settling and rotting into slushy patches.
On the west wall, plants that had been buried in snow for several days were visible again, browned and battered, but surviving. 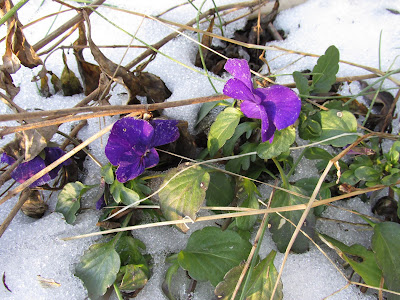 I was turning away from the garden when the slanting sun picked out this glow of purple--pansies lurking beneath the dwarf buddleia.
My feet were starting to feel cold in my wellies; coming inside to regroup I happened to glance through a west window.
A furry black and white shape was crossing from just below the shed, headed toward the south ravine.
Edward?  Not Edward!
I went quietly out the back door, moved slowly past the edge of the wall garden, cautiously, because I recognized the visiting creature as a skunk!
It made its way with an uneven gait, favoring a rear foot.
Moving resolutely it disappeared into the deep tangle of the ravine.
I waited a few minutes, noting how quickly the air was cooling as the sun slid behind the trees.
The footprints of the skunk lead from under the shed--where earlier Edward had gone into hiding.
I traced the skunk's progress to the edge of the ravine, realizing that the pawprints matched those which had puzzled me earlier in the week.
[This may be the skunk who connected with Dixie-the-dog earlier in the winter.]
It is mating season for skunks--perhaps a litter will be raised under the old shed--not a good thought. 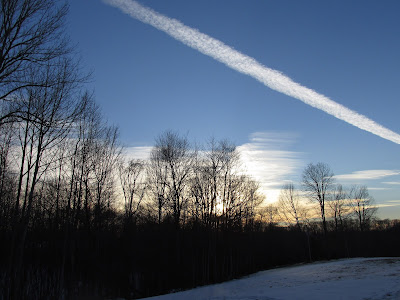 I stayed outside, watching the sky change as the sun slid lower. 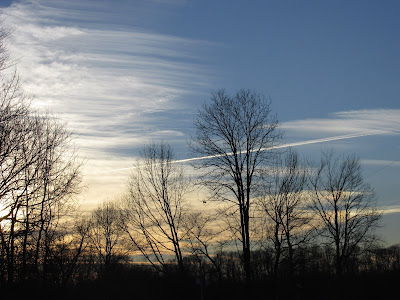 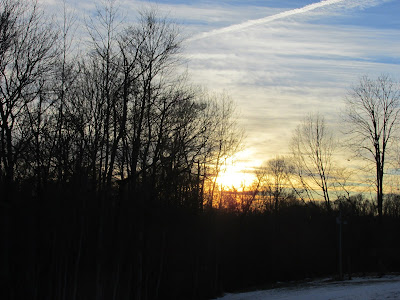 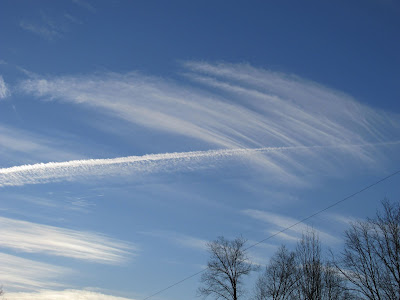 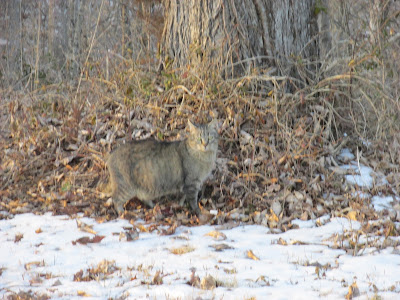 Willis and I walked back up the meadow in the last glow of light, still intermittently calling for the recalcitrant Edward.
He appeared finally, at nearly dark, heaving himself over the east retaining wall, plodding to the front steps. I hoisted him inside, noting that his legs and belly were wet. His fur smelled of snow and dead leaves. I gave him a rub down with an old towel and served his 'tea'--the portion of tinned food reserved for him when the other cats were fed earlier. 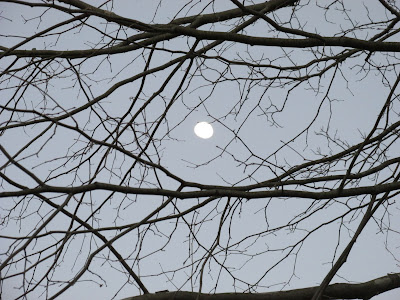 This morning, Tuesday, I drove to the quilt shop at South Fork. The roads were clear with only a scrim of dirty snow along the edges where there is thick shade.
I planned to spend the afternoon downstairs, working again on the quilt in progress.
Sunshine and a temperature of 61 F. lured me outside.
I collected clippers and a large bucket, set about pruning the clumps of nepeta that have sprawled along the east wall garden.  Willis found me, wallowed in the nepeta, swatted at me for attention.
Although the soil was wet and cold when I tugged at a few weeds, the concrete wall was warm, With the nepeta trimmed into order, I raked lank brown foliage away from the day lilies, admiring the tiny green shoots just above the surface of the soil.
Back out later to collect the sheets that had dried on the lines, and to admire the moon through the dark branches of a tulip poplar. 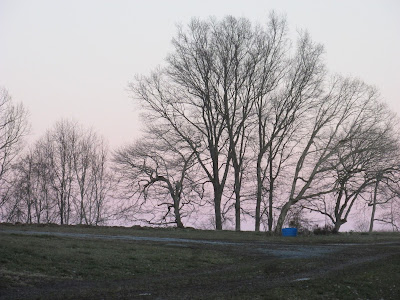 With the camera on zoom I chanced a shot toward the east fence line--a strangely foreshortened view across the garden. A lavender/grey sky to mark twilight, and the scent of cold earth--cold, but with a freshness to suggest that soon there will be the new growth of spring.
Posted by Morning's Minion at 10:27 PM