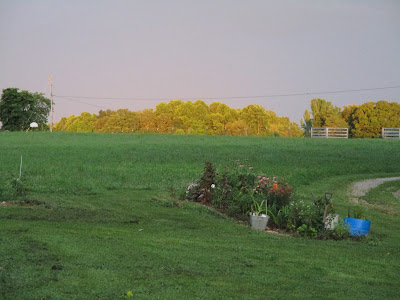 Looking east a few minutes after a mini-storm swept through.
A clap of thunder, 3 minutes of downpour and the evening sky casting a strange green-gold hue along the hedgerow. 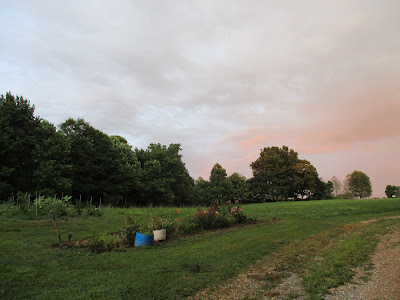 The greenish glow gave way to tints of mauve and coral on a smokey grey background. 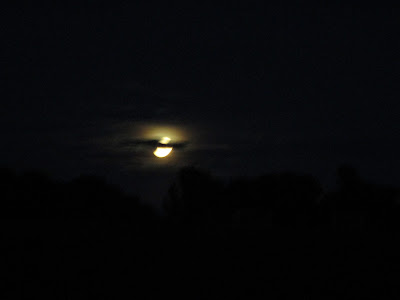 The full moon climbed through layers of clouds. 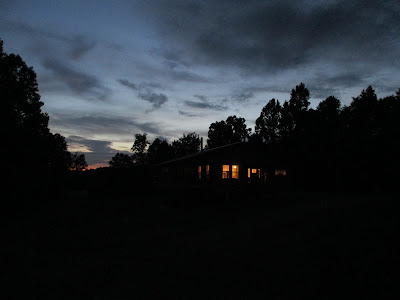 I lingered outside in the damp evening, loathe to go inside and miss the last fading colors. 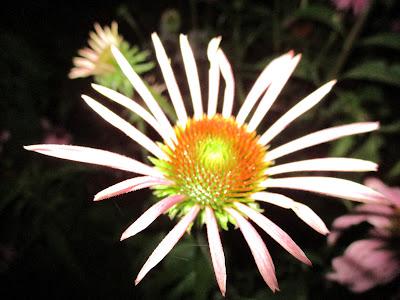 Coneflowers held the deep pink of daytime, but my camera insisted on setting off the flash. 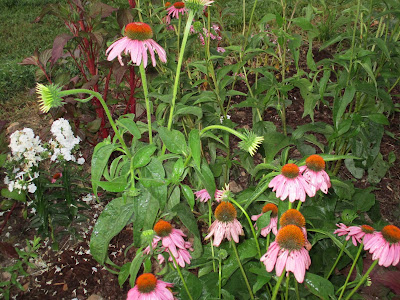 Coneflowers in an early [Wednesday] shower. 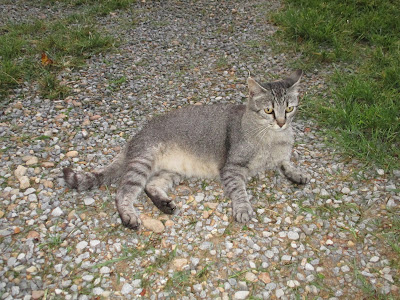 Willis, unflappable, waits in the lane while I crouch, transplanting pinks.
Recent mornings have been devoted to outdoor tasks, before the heat and humidity become challenging.  Jim roars about with the tractor dragging a box blade or bush hog, races an impending shower on the zero-turn mower.
After a well-watered start to the summer, July moved in with increasing lack of rain.
Prying weeds from the flower bed with my slender pointed trowel, I've found the soil resistant, unfriendly.
A succession of showers have passed over, the rainfall so slight as to barely wet the ground, although thirsty foliage has benefited.
Cloud patterns and colors shift quickly--a bit of sun-dappled blue in the east--steely grey moving in from the south west.
I've gone through so many bags of bark mulch that Jim suggested we use grass clippings. We took turns raking them up, then I spread them around the base of the second planting of tomatoes and cucumbers and along the hard-fought edges of the perennial strip.
Working around the tomato plants in the main garden I noted the unmistakable damage of a tomato horn worm on two adjacent plants, but couldn't locate the pest.
Half an hour later during another inspection I found it--a great fat one--and rudely dispatched it. 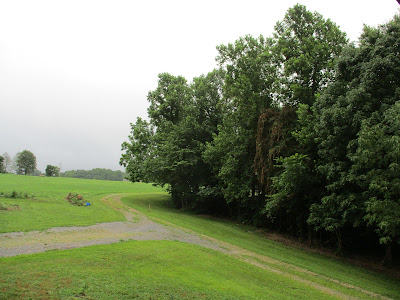 I was transplanting three clumps of Old Vermont pinks when the anticipated shower broke.
It moved through so swiftly that my coiled up hair and the back of my shirt were only slightly dampened.
The pinks have been available in limited quantity from my favorite online nursery, Select Seeds.
I planted my original small clump in the gravely strip alongside the porch at the Amish farm and moved them here in the fall.  The flower is modest--a light clear pink, with single slightly frilled petals, the foliage is grey-green.

Pots and trays of seedlings clutter the lower porch---the Spanish Peaks foxgloves, usually sturdy-- haven't fared well--I think too crowded as sown in the original pot and the soil mix when I potted them on was too heavy for fragile stems.  I have less than a dozen of them.  Most of the Sutton's Apricot variety are sturdier.

July is the season of daylilies; I see them planted in colorful groups, in long borders of a single color, or dotted in foundation plantings. Once settled in they seem impervious to stressful weather.
Perhaps I should have more of them.
July is also a time of pruning back many of the early blooming perennials, easing the demands of high heat and fluctuating moisture in the hope of fresh blooms in late summer.

We are well into the heat of high summer, yet already--not quite a month past the solstice--I notice that sunrise is later.
Evenings are still light until after 9 o'clock giving us an hour to work in the gardens after the sun has slipped behind the ridge.
We find things to do in the house during the heat of the day; the A/C keeps the rooms cool.
There are still some finishing tasks to be completed in the lower level of the house, and boxes of my worldly goods that need unpacking and sorting.
Meals are light, with plenty of fresh veg, few desserts and endless pitchers of iced tea.

There are days when I am frustrated by the length of my 'to do' list--not enough tasks accomplished.
I often need the gentle reminder that in our retirement years a new way of 'measuring' must evolve--one that is not a constant comparison to stamina and strength of earlier years.
The most important things will get done! 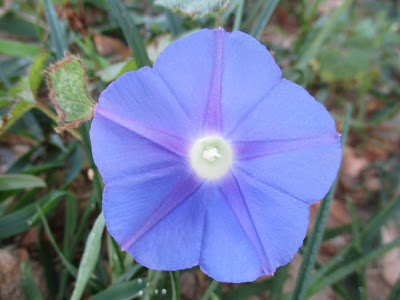