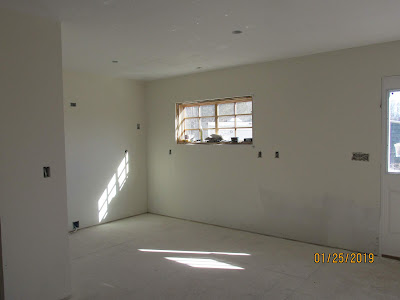 Ten days of grueling, messy work, by the men, and the main floor of the house was ready for paint.
Jim announced that Howard and I should go to Lowes Home Improvement in Campbellsville and purchase 2 five gallon buckets each of primer and wall paint.
For months on each trip to Lowes I have added paint sample cards to my stash, spreading them out from time to time to compare the minute differences in shades of 'off-white.' 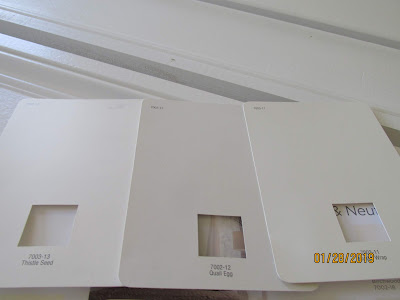 There are those who find 'off-white' totally boring. I prefer a neutral background--restful, non-demanding--which allows for what the decorating industry currently refers to as 'pops of color' supplied by my quilts, curtains and collectibles.
I narrowed my choices to three: 'Thistle Seed;' Quail's Egg;' 'Muslin Wrap.'  [Ever wonder who dreams up the exotic names for paint colors?]
I chose 'Muslin Wrap'--a warm cream that doesn't present as 'yellow.'
The open living area/great room will have wainscoting; the two main floor bedrooms will have chair rail with a different color paint below. 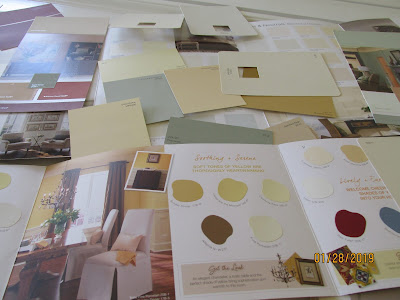 I pondered the options.  My color preferences in quilt and drapery  fabrics, as well as paint for refinished wooden pieces, have long been the 'Early American' shades of faded dark red, old gold, grey-green.  Bright 'hot' colors set my teeth on edge, pastels don't inspire.
I dithered between a warm golden yellow [Early Morning]  a color labeled 'Mystic Mocha' [used in several of the bedrooms at the farmhouse] and a sage green [Dried Sage.]
I stood in the bedrooms at different times of day, considering what the effect would be. 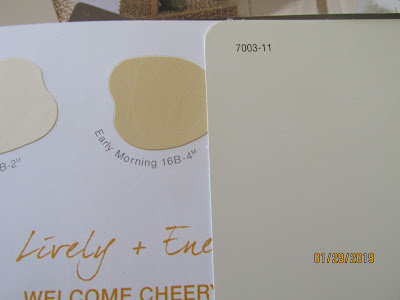 Typically, the trip to buy paint was announced suddenly during breakfast on Thursday.
["If you want paint for those bedrooms, we're going to Russell Springs in half an hour!"]
I hauled my folder of paint samples from the cupboard, hastily shuffling out the favorites. 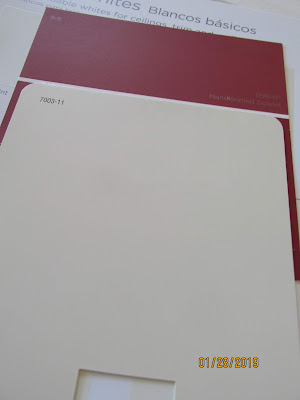 My fingers paused on a sample I have used as an 'accent wall' both at the Amish farmhouse and the Bedford stone house which we refurbished and soon sold.
'Hand-Loomed Scarlet,' a faded 'antique' red which makes a statement without screaming.

I applied the first coat to the north-west bedroom yesterday, working around the men who are now laying down floors.
If you've worked with paint, you know that reds are considered 'transparent' colors. It takes several coats applied to achieve coverage 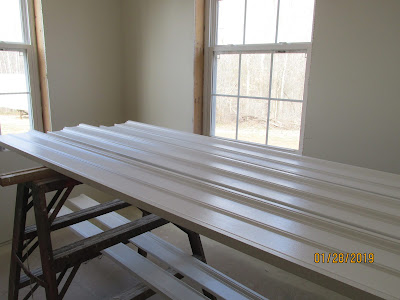 These trim pieces were purchased already primed.
I have applied two coats of semi-gloss 'Swiss Coffee.'
Yesterday I was directed to a work space set up in the back area of the basement, and instructed to paint a stack of narrow molding which Howard had already primed and sanded.
The boards were laid out on a trestle constructed of two folding sawhorses and 2 x 4's. I began painting but wasn't satisfied with the lighting that had been hung in the stairwell.
[The electrical inspector is dragging his feet on the final permit needed to 'turn on' the permanent electrical service.]
I decided that working from the opposite end of the trestle would provide better light on the length of the molding strips.
I had finished about 3/4 of the work, carefully moving each painted strip to the far end of the 2x4's when the whole set up went down with a crash. The painted strips clattered to the floor in disarray; the paint cup and brush overturned splattering paint in dripping streams.
I bellowed in outrage and dismay--provoked to using a scatological term.
Jim and Howard pounded down the stairs!
Howard snatched up the overturned paint container and brush, while Jim righted the overturned sawhorses.
I was treated to exasperated queries: 'Why on earth were you working from that side?'
'Couldn't you see that you were over-balancing the supports by loading the finished pieces on that end?'
No, I didn't see that or of course I wouldn't have done it!

I suggested that I should have been warned not to work from 'that side' of the set up.

'We didn't tell you because anyone in their right mind should have known what would happen!'

Howard, in spite of dire mutterings, was quickly brushing down the paint which had been flung on my finished work. I attempted to dip up puddles of paint which had landed on the floor, furiously lamenting the waste of paint and the spoiling of my careful work.
Forcing a calm which I didn't feel, I took another brush and subsided, smoothing out drips, rearranging finished strips.
With that accomplished, I excused myself from working on the remaining lengths of molding.
I needed to settle my feathers and decided that folding clean laundry might provide a soothing interlude.
It has been suggested that I appear and continue with applying hand-loomed scarlet paint to the bedroom walls.
I shall bundle up against the windy walk up the lane, hoping for a stint of painting without drama. 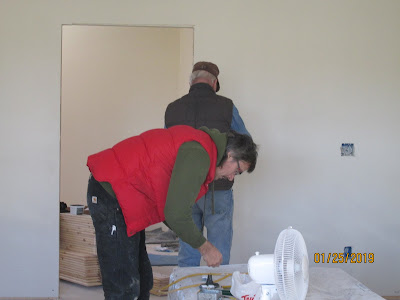 The resident experts on all things construction and paint related.