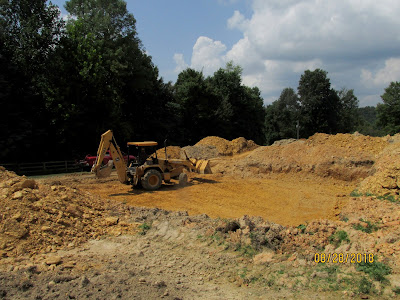 Cellar Hole on our new property: A work in progress.

From Merriam-Webster:
Definition of cellar hole: an excavation intended for a cellar or the exposed cellar area where a house has once stood 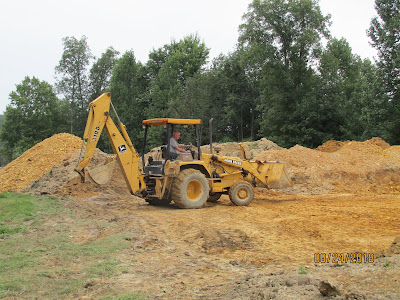 A good friend, sitting across the table from us at a recent church dinner, inquired, "So, have you started work on that piece of property you bought?"
Jim, having momentarily shoveled in a large wodge of lasagna, took a few seconds to reply, then stated, "I've got my cellar hole two-thirds dug.  If the rain will quit for a few days I'll be ready for concrete."
Friend Raymond was puzzled. "Say what? You're doin' what?"
Jim elaborated. "I bought a backhoe.  I'm digging the cellar hole!"
Raymond considered this. "I suppose you mean you're digging out for the basement...or do you mean a storm cellar?   I never heard of a cellar hole."
I decided to wade into the conversation.
"The cellar hole is the excavation in the ground where the foundation goes."

New England [the land of our birth and heritage] is dotted with old cellar holes, the buildings which stood there-on long since collapsed and slowly absorbed into the surrounding earth.

Cellar hole is a term well understood in New England, in upstate New York and in the Maritime Provinces of Canada. Crouched in over-grown pastures or along bramble-crowded log roads cellar holes endure, half filled with more than a century's worth of fallen leaves, layers of twigs and branches, with perhaps part of their stone-lined walls tumbled.

Stones were [and are] a plentiful commodity in the north east---picked laboriously to clear hilly pastures, piled in heaps and cairns, stacked to create grey stone walls--and cellar holes.

A stone cellar hole a few rods from Grampa Mac's south line fence bore witness to a house burned decades before my birth. My mother could not recall a house there or name the family  to whom it might have belonged.
My sisters and I clambered over the sagging wire fence, scrambled through thorny barberry bushes to emerge at the edge of that cellar hole. The stones wore beards of moss. Weeds and a few small saplings hid the detritus of years--rusted tin cans, shards of broken crockery, twists of blackened wire.
We poked about, inventing tales of the families who might once have lived there.

A twenty minute walk across the west pasture, over the brook, up the hill and into Grampa Mac's woodlot brought us to another stone cellar hole.  This one lay a short distance from the woods road, surrounded by maples and beech.
We pressed Uncle Bill for information, but although born and raised on the farm he could supply only the vague hint of a story: a man, before his day, had owned the lot, prepared the cellar hole but died before building a house.

To the east and a bit south of Grampa Mac's farm lies the wooded rise known as Wilder Hill. A road [so they say] once followed the base of the hill, passing the homesteads of Daniel Wilder and Edmund Gould, forebears of Almanzo Wilder.
Elderly residents in the neighborhood recalled that the old road was still occasionally used in the early 1900's as a 'short cut;' they testified to the presence of the old cellar holes that remained after the two families departed for northern New York in the 1840's.

We searched for traces of the old road, crossing a neighbor's back meadow, battling swarms of black flies and summer's heat.
A neighbor and I once left her car in the edge of a field, hiked into the woods hoping to discover the old road from its supposed northerly starting point.   It was late September, a day of golden sun and drifting leaves.  We made our way around the hill inside the belt of trees, finding no hint of a road or a long-ago dwelling.  We retraced out steps, plunged higher into the woods.  Susie grew tired, her passion for local history drowning in fatigue and a failing sense of direction.  I assured her we had only to walk toward the sun hovering low over the western ridge and we would reach the pasture below her home where I would phone for someone to fetch her car.

In all the years that we searched for the Wilder Hill settlement we found no trace of the old road, no half buried cellar holes, no twisted lilacs which might have graced a dooryard.

Decades ago when our children were in grade school, we took an impromptu Sunday afternoon trip across Lake Champlain on the ferry, drove through the quiet streets of Ticonderoga, headed for Hague, NY, the place where many of my mother's kinfolks settled in the late 1700's.

Absorbed into Jim's large maternal family, I was feeling a need to connect with my own roots.
I realized that although I cherished Grampa Mac's stories of growing up on the little farmstead tucked against Tongue Mountain, I had never been there and had no idea where it was located.

We landed in the dooryard of my great uncle and aunt [Grampa Mac's sister] who promptly rang up their daughter and son-in-law next door to tell them of our arrival.
At some point in the afternoon when I mentioned my desire to find the place where Grampa was raised, we were bundled into Gerald's car and driven a few miles up the Graphite Mountain Road.
Gerald turned onto a barely defined rough track that led through the green darkness of close-crowding trees.  The car lurched forward over grass-grown ruts, bumped to a stop.

Grampa Mac's stories had conjured a picture of a small clap-boarded farmhouse, wood smoke rising from the chimney, a barn for livestock, stable for the horses, pasture and hay meadows.  We stood there in the tiny clearing, trees leaning in from all sides; brush and brambles made exploration impossible.
My imagination failed me,
Gerald jabbed with the stem of his pipe: "The house stood there--see where the rim of stones marks the old cellar hole.  The barn was back to one side." Again he gestured toward the trees with his pipe.

After all, what had I expected? Surely not this sense of dislocation, this silent deserted spot in the deep woods.  I couldn't people it with my grandfather, his younger brother and sister, his parents whose likenesses were not among those curling tiny photos in the musty old black album.

I walked slowly toward the rubble of grey stones, all that remained to mark the place that had been home to three generations of my mother's paternal family.  I ran my hand along a bit of the cellar wall still standing, selected a flat, grey, moss-covered stone, small enough to take away.

Paging through the entries in a diary kept by Grampa Mac I found his record of a journey back to the old farmstead on Tongue Mountain.  In his late 80's and a mere few years before his death, his remarks were typically brief: "Went back to the place where I was raised.  Hardly knew it, couldn't find the big maple that was in the dooryard."

People move away from home, old hamlets are deserted, saplings sprout and grow into trees that obliterate pasture, house and outbuildings.
As Grampa Mac would have said, families 'die out' and soon the generation that knew the names, the places and stories, has passed.

Jim hopes to have our cellar hole ready for concrete this week. A new house, one without prior history or former occupants. As the walls are raised, the surrounding earth leveled and smoothed, I can anticipate landscaping, choosing the shrubs and perennials that will define a dooryard created from a former rough pasture.

"Cellar hole" and 'Door yard" are terms firmly lodged in our lexicon, part of our sense of place.
They mark the  beginning of what will become "home."

Dooryard: US and Canadian:  a yard in front of the front or back door of a house. 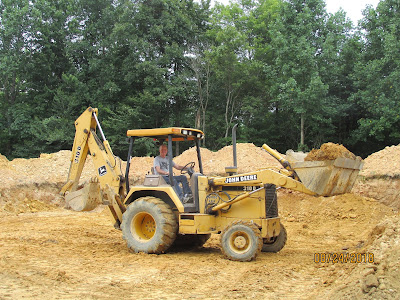 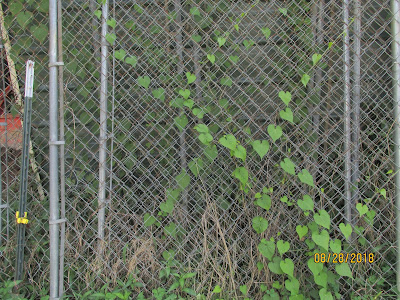 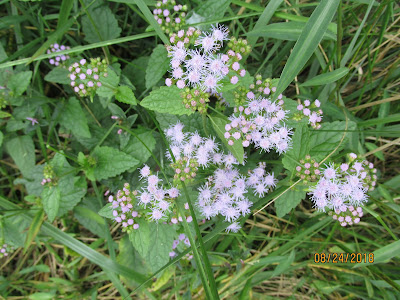 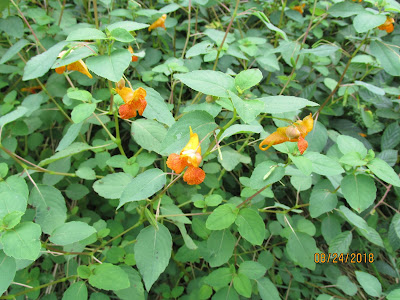 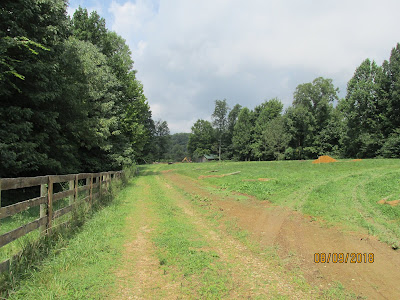 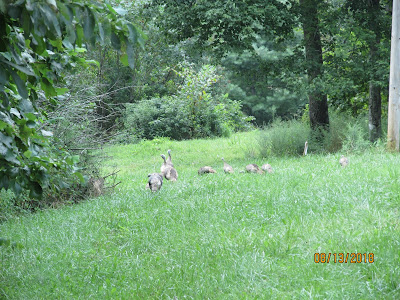 Posted by Morning's Minion at 1:07 AM