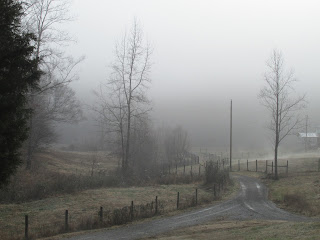 Freezing fog has been a presence for three mornings, legacy of the weekend's erratic weather changes. Opening the curtains at what should be daybreak merely invites a spill of grey into the room.  The cats rumble down the staircase ahead of me, clamoring at the front door. They hesitate on the brink of stepping out into the heavy December dampness. 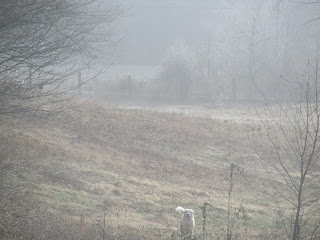 By the time I have poked up the fire and shrugged into warm clothes, the white blur outside has intensified.
Munchkin, the Great Pyrenees in charge of the dry goat pasture, bounds up to the fence, woofing a token alarm when I walk to the side porch, camera in hand. Her moving body is a more substantial mass of whiteness in the milky landscape. 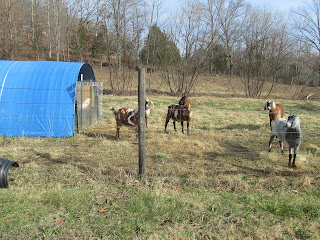 We dawdled through breakfast--French toast served with maple syrup and a sauce made from blueberries cached in the freezer. By the time I had tided the kitchen a wintry sun was burning away the chilly fog and the sky had brightened to a promising shade of blue.
I rummaged out my fleece-lined boots, found a ridiculously large sherpa hat which has a tendency to ride on the bridge of my nose. A down jacket which has seen better years and warm gloves completed my mid-winter outfit.
The dry goats greet my progress down the lane with enthusiasm, hoping that I have banana peels or apple parings. Today I have only a handful of stale crackers and the end crust from a loaf of bread which they share with Munchkin. 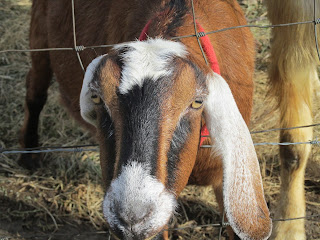 Betula, one of the friendliest and most photogenic of the goats. 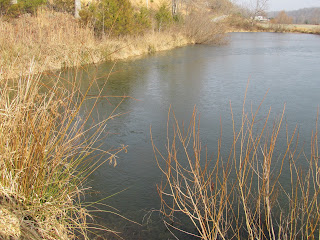 We recently sold the fields along the road to a local young couple.
They graciously gave me permission to continue walking there.
Overnight a skim of ice formed on the pond, and its surface is crinkled with delicate ridges. 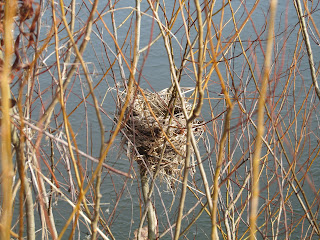 A bird's nest is revealed in the forked branch of a slender pond-side willow. 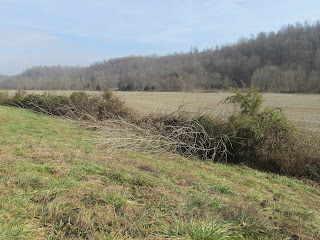 The new owners have begun their stewardship of the acreage, trimming hedgerows below the pond, cutting smaller trees along the edge of the creek. 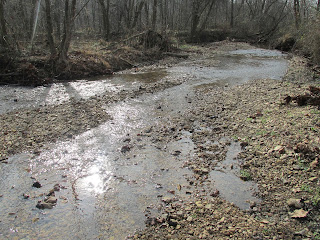 The recent midnight downpour revived the creek, dry since August. 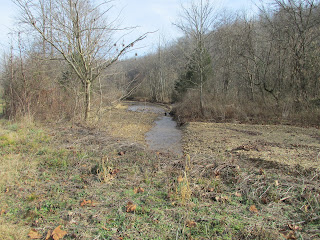 Cardinals and sparrows bounce in the tangle of shrubbery and vines that defines a corner of the field and parallels the deep drainage ditch that slices down from the road.
The birds' voices are subdued and they are too busy for photos.
A crow announces my intrusion with a raucous shout. 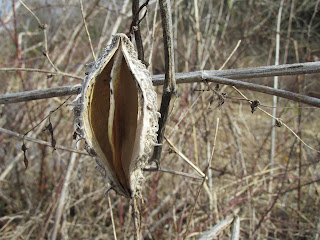 The flowers of woodland and verge are gone. Seedpods rattle and dry leaves whisper beneath the fragile weight of the hedgerow birds. 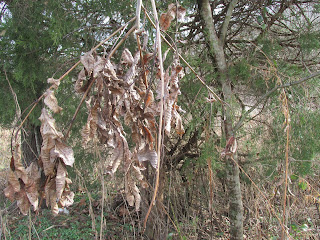 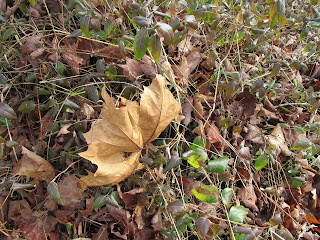 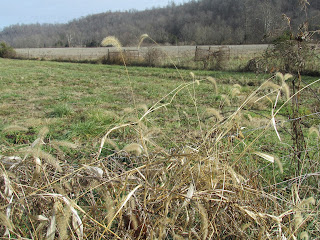 I turn back, retracing my route along the creek. My gloves are stuffed in my pockets, my padded jacket unzipped. A faint but noticeable warmth glances over my shoulder and my shadow, fore-shortened, stumps along beside me. 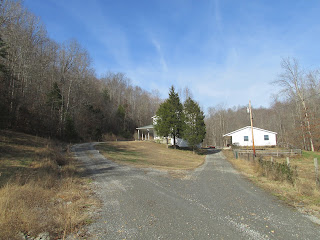 The milk goats and the young doelings have been turned into their respective areas, each policed by a huge white dog. The dogs bark and dash along the fences, letting me know that they understand their duties.
As the lane slopes uphill toward our house the valley narrows, the steep ridges edge closer, holding the buildings in a wedge of open space.
Jim has built a fire in his shop and the smoke rises to mingle with the grey plume drifting from the house chimney. 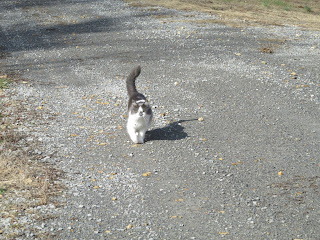 Nellie-cat, sprawled in the pool of sun-warmth on the side porch, hears the crunch of my boots on the gravel, stretches and strolls down the hill to meet me, tail held high in greeting.
Indoors I note the hands of the kitchen clock are folded at noon.
By the time I have pulled off my boots, hung my jacket on the peg by the back door, the sunlight has faded, the sky has resumed the pewter tints of morning.
At 3 p.m. when I start to prepare our early supper, the kitchen is dim.  I hesitate before flipping the light switch, thinking of the generations before me who might have frugally delayed the lighting of candle or lamp, straining to see in the enfolding dusk.

I note each Winter Solstice, not as a pagan affirmation, but in remembrance of my late father Larry's observance of the changing seasons with their complexities of weather. He greeted December 21st as 'the first day of winter'--braced for the extra labor and the watchfulness that a long Vermont winter would surely bring.
I have honored this shortest day by walking in a brief hour of sunshine, by layering four paperwhite bulbs in a pot lined with pebbles and peat moss in anticipation of winter bloom.
As early night gathered outside, my kitchen has been light and warm, filled with the aroma of soup and golden cornbread.
We have carried in firewood, served the house cats their afternoon 'tea', tallied the small accomplishments of this first day of winter, 2016.