A Day to Be Outdoors 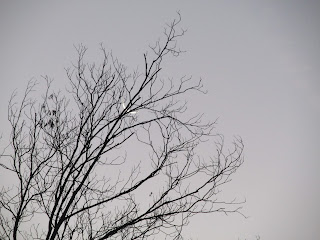 I stepped out the back door early this morning into a strangely balmy warmth.
The sky still held the milky grey of dawn with a sickle moon caught in the top branches
of a bare tree. 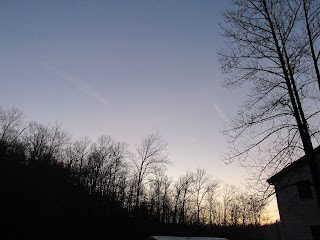 As the sun rose over the creek, a tinge of blue announced a fair day. 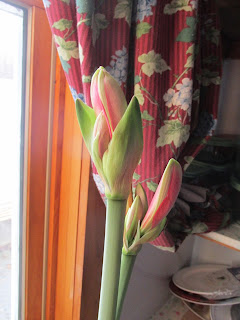 I served breakfast to the outside cats who eat on the front porch, stirred the coals in the wood stove, adding only a few slender sticks of wood to ensure that the fire didn't die.
I opened the door to the sunroom, watered the Norfolk pine which winters in there, noted the beauty of the amaryllis opening on the pantry shelf. 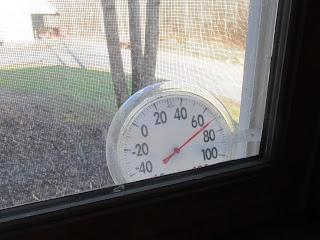 Breakfast was light--a banana, cold cereal with cream and a tub of yogurt.
The thermometer outside the kitchen window was already registering 70 F. 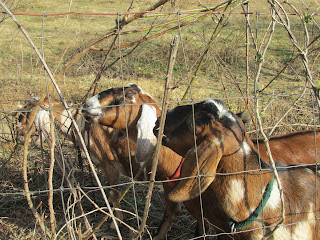 I collected banana skins and some stale bread for the dry goats.
They recognize the purpose of my red scrap bucket and hurry along to their feeding trough by the gate. By the time I had poked letters into the mailbox, the goats had processed back up the lane and were having a snack of brambles. 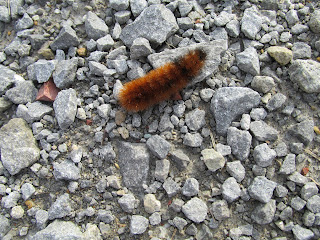 Wooly bears who sought shelter in the woodpile and clumps of dried grass during the colder weather of mid December have come out to stretch and enjoy the warmth. 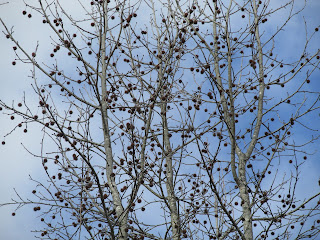 I walked slowly up the lane, tipping my head back to better appreciate the shapes of the trees against the background of blue.
The clouds were rolling along so swiftly that I began to feel as if the ground under my feet was moving with them. 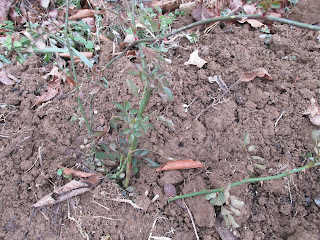 I picked my way along the edge of the perennial strip, too sodden with recent rains to permit digging.
I checked the rose which I  tucked into the ground last week.
The root came from our nephew's wild property on the other side of the county, carefully brought to me by his wife. It spent the summer in a large pot of good soil, languishing through the heavy heat of July, reviving to thrust up new leafy shoots as the weather cooled. Through the long dry fall I waited for a favorable time to transplant. It went into the ground with the pot full of loose rich soil, then I tamped the garden earth around it.
I think it will do.
I tugged at a few clumps of weeds which have burst through layers of mulch. Only those with slender wiry roots can be tweaked from the wet soil. 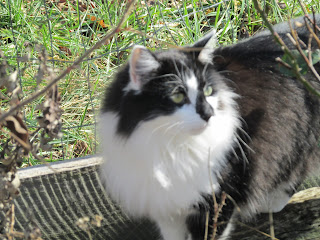 I settled for pottering along below the retaining wall.
This delighted the boy-cats who collected to 'help.'
Bobby marched behind a barricade of thorny stems. 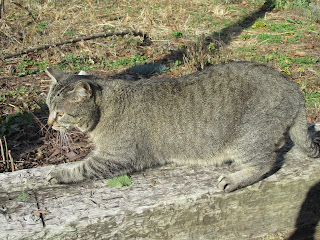 Willis prowled along the wall, getting in my way as I attempted to clip the dry plant stalks within reach. He swatted playfully at my hand, smacked the clippers. 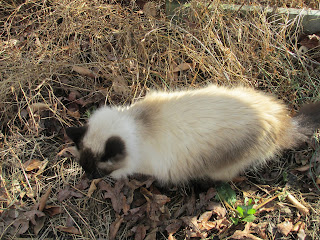 Charlie clambered onto the wall, nattering and purring.
Willis announced that the wall belonged to him and that Charlie had best get down! 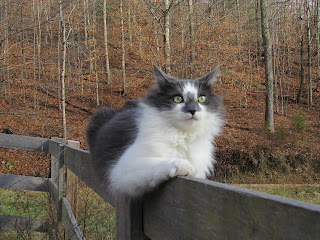 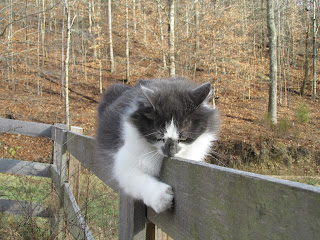 He struts along the board, executes a tight turn at the corner post, sashays back, plumy tail swishing in the breeze.
Fending off cats, I began snipping tangled stems of nepeta, releasing a cloud of fragrance.
Next to fall to my clippers were the prickly seed heads and dried stalks of rudbeckia.
Greyed stems were all that marked the clumps of monarda and platycoden.

In the corner beneath the butterfly bush a mound of lemon balm lay frost-bitten, but with green growing rosettes tightly folded close to the damp ground.
I have cultivated a variety of herbs in greatly differing landscapes and climates.
Lemon balm for all its delicately crinkled leaves is a hardy plant.
Its distinctive scent whether fresh or dried is a scent of cherished antiquity, a plant grown and loved for centuries.
I never handle lemon balm without feeling a momentary wave of peacefulness. 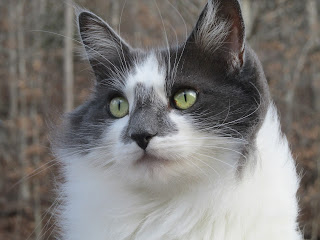 The wind was increasing, whipping my hair into my face, stirring dry leaves, soughing through the branches of the bare oaks and ash trees that line the ridges on either side of the house.
In the north brilliant blue was leaching from the sky, giving way to a pewter hue.
I judged it was time for the cats' 'tea.'
Brushing damp soil from my hands I headed up the steps toward the side porch.
Nellie dropped from the fence, barreled past me at speed, bolted through the front door. 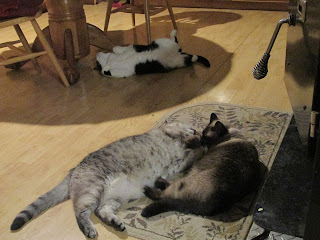 The cats had their 'tea'--Jim and I made a meal of assorted holiday left-overs with slices of fresh pineapple for 'dessert.'
I pulled up a song on you-tube suggested by one of Jim's musical cousins.
You tube always ropes me in--2 hours later we were still in front of my PC, Jim singing along with Hank Snow's train songs.
Now at nearly 11 p.m. the thermometer still stands at 67 F.
The house feels overly warm--except to the cats!
I need to peel off at least one layer of quilts from our bed.
The calendar registers bleak mid-winter, but for a few days it seems we have a remembrance of springtime.