The Morning Faces of Autumn 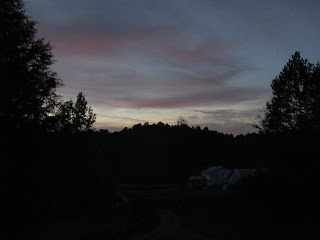 After a long hot summer it has seemed as though the transition to fall weather has been abrupt.
A few days past the equinox there were storms, a brief return to hot days, then a sudden plunge to chilly mornings and evenings.
We have had a fire several mornings and have rummaged out long-sleeved shirts. I wake under a pile of cats who have made themselves comfortable sometime during the night.
Although it is still nearly dark at 6 a.m. the cats are agitating for me to be up.
They rumble down the stairs and congregate at the front door, anxious for the first whiff of fresh air, the first exploration of dew-soaked grass at the edge of the front porch. 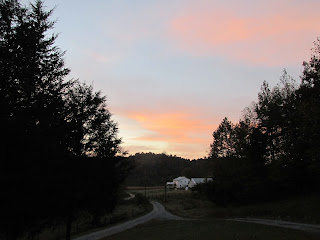 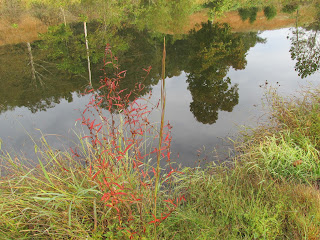 It was quiet when I walked to the pond along the road, the milk goats, the kids and their guard dogs still in the barn.  The dry goats were beginning to stir by the pasture gate, hopeful that I might have a tidbit to share.
A fish leaped in the water as I walked along the edge;  the ripples of its sudden movement flattened leaving the surface of the pond calm and glassy, reflecting the trees along the farther bank. 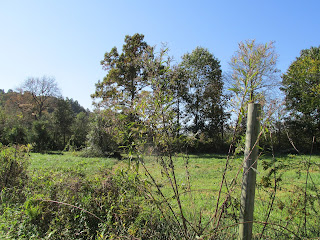 I picked my way along the fence, its sagging wire burdened with the weight of tangled morning glory vines, leaning goldenrod, towering stalks of gone-to-seed ironweed. 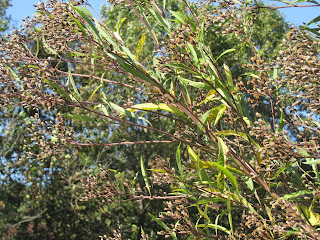 A riff of wind stirs the ironweed which is taller than I am, sculpting the seed heads against a background of blue sky. 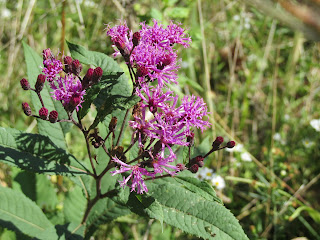 One richly flowering plant crouches low in the tangle of wet grass around my feet.
I have worn my leather work boots, and kept to the roughly mowed verge of the field, but the toes of my shoes are darkly damp as are the frayed hems of my jeans. 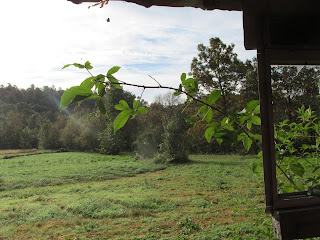 Before leaving the field I pause in the side doorway of the weathered tobacco barn.
The mist of morning still hangs over the field that borders the creek. 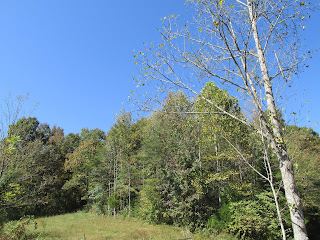 By the time I reach the lane, the day has settled into one of brilliant autumn perfection. 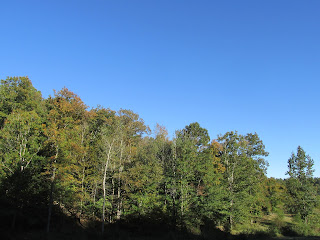 I miss the crimson of autumn maples in my native New England, and recall the shimmer of Wyoming aspens flaunting their gold even as the first snows whitened the mountain slopes.
Here in Kentucky the tulip poplars released a shower of yellowed leaves early in September.
Now we watch as tints of russet and bronze appear on the hillside oaks. 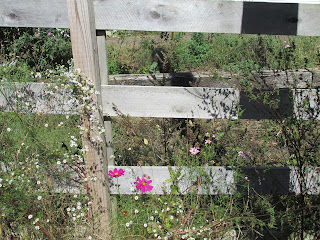 A few stray cosmos and pale frost asters huddle against the fence below the shabby
and depleted garden. 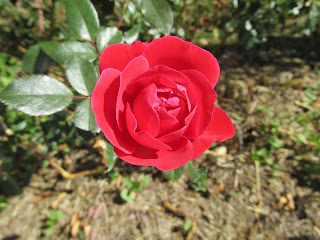 I have only one Double Red Knock-Out Rose--uprooted and moved twice from former gardens.
It is recovered from the summer ravages of humidity and Japanese beetles, lifting a fresh crop of blooms. Perhaps I would do well to abandon the perennials which have languished and settle for a hedge of these stalwart survivors!