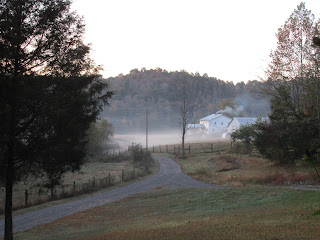 Mornings have been cool during the past week.
I enjoy the ritual of making a fire in the big black woodstove as daylight seeps slowly over the ridge.
As you can see, the neighbors who rent our 'big' farmhouse at the foot of the lane, also built a fire to ward off the chill of the early hours.
Most days we let the fire burn itself out about mid-day, sometimes stirring the embers into fresh life if the evening is damp. 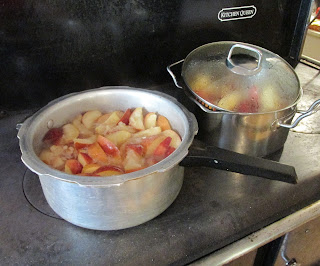 Last week I brought home a half bushel of Empire apples from the Beachy Amish produce farm located about a mile up the ridge road.
The Beachy family does not grow the apples, but had them trucked in from a Pennsylvania orchard.
We have in previous years been disappointed in apples grown locally.
Raised on the crisp sweet/tart varieties that flourish in our native New England we found 'southern' apples lacking in distinctive taste and texture.
The PA apples are everything that a good apple should be!

On Friday afternoon I was inspired to stew up a kettle-full of apples for applesauce.
It was a rather gloomy day and we kept the wood fire puttering along.
I cooked my apples on the electric cook-top--only realizing as I began to sieve the sauce through the Foley mill, that I could have simmered them on the wood stove!
[We do most of our stove-top cooking on the wood stove during the colder months, but apparently my brain hadn't made the transition!]
The applesauce was so good that I decided to make more and put it up in jars. 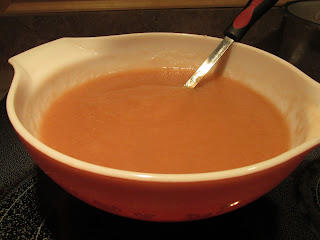 Canning applesauce is a tedious process--putting it up in freezer containers saves a step--but we have no  room in the freezer!
On Sunday evening a second batch of apples stewed gently and fragrantly on the wood range.
This morning I decanted it into glass jars, and with the fire at a subdued roar, set the water-bath canner on the stove.
Later, I collected my neighbor and drove with her back up the ridge where I purchased another bushel of apples--a bag of Empires and a bag of Winesaps.

Applesauce production took over the kitchen for the remainder of the day.
The sun warmed to higher temperatures than predicted and by early afternoon I had opened one of the kitchen windows.
When Jim came in for dinner he made his plate and immediately decamped with it to the living room--where he opened another window.
Evening found us with two windows open in the kitchen, an electric fan set up at the edge of the front hall--and in desperation--the A/C turned on! 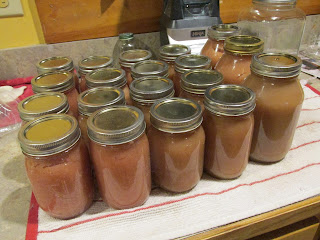 For my labors I have 16 pint jars, 3 qt jars of applesauce, plus a bowlful delivered next door and some consumed at breakfast.
I could, of course, have made applesauce using the electric cooktop.
I am wary of setting the heavy canner full of jars and boiling water on the glass top--such a modern appliance wasn't designed for such old-fashioned cookery.
I am pleased with the accomplishment of the day--but truly--it is a good deal of effort expended for the resulting product.
I am fall-over tired tonight! The fingers of my right hand have taken on the shape of my paring knife's handle. My shoulders are aching.
As with all such projects, I remind myself that it will be a delight to serve the applesauce over waffles on a January morning, or add it to a simple supper on a snowy evening.
I have more apples to process.
I daresay I will wait for a day when the constant heat of the woodstove  will be more appreciated.