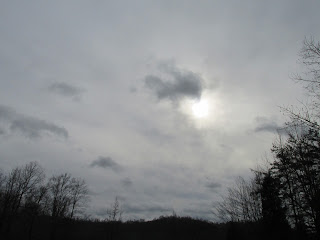 Variable weather moved through our region during the first week of December.
Tuesday, December 2nd, dawned cloud-streaked and chilly after several days and nights of intermittent rain. 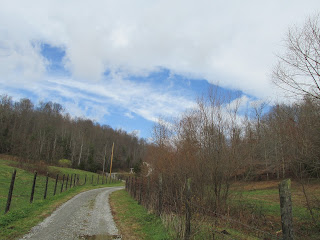 By late morning the sun was struggling to break through layers of clouds
There were moments of strangely vivid color--winter grass a bright green. the remaining wind-warped leaves on the oaks a waxy russet.
Walking up the lane toward the house I felt encouraged that the weather was about to change for the better. 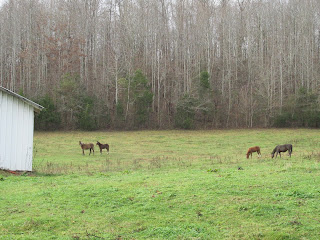 The sky to the south-west beyond the pasture was not as promising, still dense with overcast. 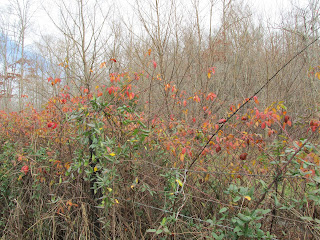 Beyond the fence which is tangled with honeysuckle vine, orange leaves are a bright splash in the somber landscape.
Identify of this shrubby plant escapes me at the moment. 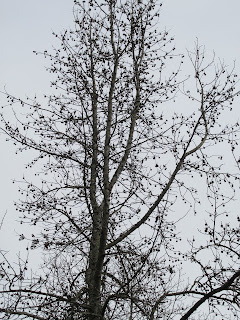 A sweet gum tree clings to its crop of seed balls, a dark design etched against a misty background. 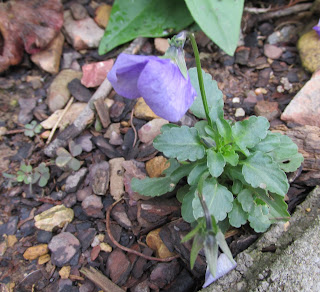 In the raised bed along the side porch steps a tiny viola has volunteered. These little plants fade and disappear with the heat of summer, but their self-sown offspring pop up and survive the cold, giving them their common name of 'johnny-jump-up.' 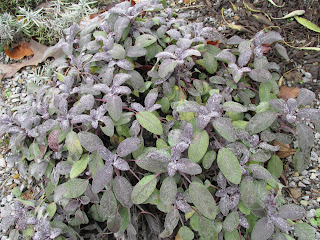 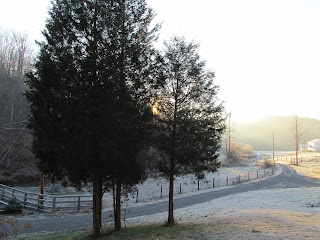 We expected over night guests on Thursday and were delighted that their arrival coincided with an afternoon of low-slanting golden sunshine which bathed the farm in a mellow and nostalgic glow.
We happily drew chairs around the wood stove, enjoying the warmth as we caught up with family news and spoke of other years, other places.
Friday morning the sun rose on a frosted and sparkling landscape. 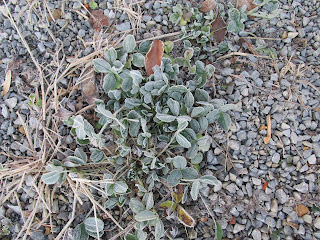 Our guests were on their way by 7:30 and I followed them out into the crisp morning, camera in hand.  The sun which was already melting the frost along the lane, had yet to touch the sides of the steep ridges which  enfold our house. 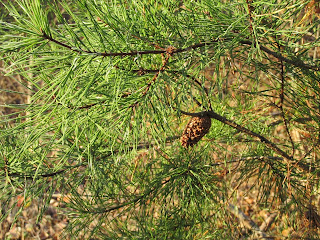 Slowly warmth and light advanced up the lane, touching the scruffy misshapen small pines near the retaining wall. 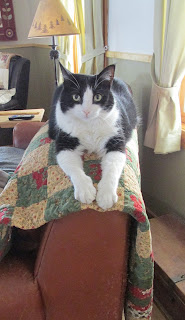 I had more tidying and cooking to do as we had invited friends for lunch after church this week.
I always feel apologetic about cat hair--renewed almost faster than I can hoover it up.
Edward watched reproachfully as I dragged the vacuum cleaner into the living room, disturbing his nap with its whooshing noise. 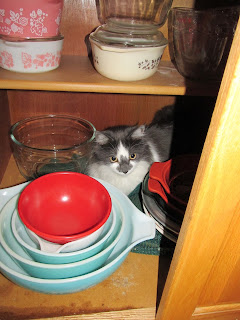 Nellie darted into a cupboard when I selected a mixing bowl.
It is easy to imagine that he might have whisked into a shed or barn some miles from here, been shut in during the three weeks of his mysterious absence.

We've had an enjoyable spurt of 'company' over the past two months and inevitably we have hastened to finish renovation tasks which might otherwise have dragged along.
Late yesterday and again today I have felt a bit unsettled, suddenly aimless, with no bustle of preparations.
Linens are laundered and put away, leftover soup and salads set out for quiet meals.
A few Christmas gifts have been ordered; several will be mailed directly from the supplier [the joy of online shopping!] two need to be packaged and sent to opposite ends of the country.

The pantry shelves and the freezer are well-stocked for any holiday baking.
Hibernation mode is luring me to the quiet pleasures of books, some stitchery, a return to several projects laid aside during the long year of renovations.
As winter asserts itself, I look forward to a more contemplative season, a time when I can more fully enjoy the home we have labored to create.