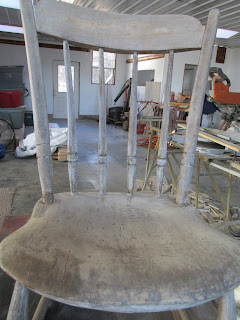 The small green-painted rocking chair stood in Grandma Eliza's bedroom, placed to the right of the closet door and near the double bed.
If one angled the chair toward the south-facing window, the view would have been of the side dooryard. a huge maple tree, and the gravel drive which stretched toward the barns.

I don't recall my great-grandmother sitting in the chair.  She was likely too busy!
Bedrooms in those days weren't considered a place for personal retreat; bedrooms were meant for sleeping, not dawdling, with a chest of drawers and the 'clothes press' to contain belongings.

The chair wore many coats of grey-green paint which my Uncle Bill, ever the conservationist, had layered with varnish.
Strangely, I haven't a clear memory of when the chair was presented to me--I think that Bill [as we always called him] gave it to me during a generous moment when we were building the small house next door in 1980.
An older neighbor told me later that such scaled-down chairs were termed 'nursing rockers'--small and light enough to be tucked out of the way or pulled out for use when an infant needed feeding or comforting during the night.
The seat of the chair was shaped from a single thick slab of wood and the side spindles have the form known as 'rabbit ears.' 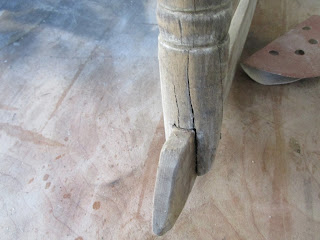 When I was in my first phase of refinishing old furniture a neighbor used a heavy duty stripper to cut through the many layers of paint and varnish--the same man who cleaned up the old chest of drawers pictured in my last post.
Jim inserted some screws to reinforce the shaky joining of the rockers to the legs of the chair.
In our first-built Wyoming home I placed the little chair in a guest room where I had displayed a number of small vintage collectibles. 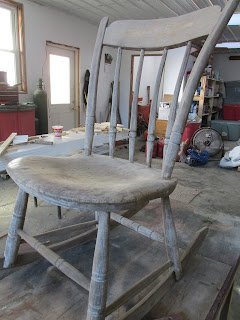 As we built houses, moving  into several of them, incompletely furnished, until they sold, the rocking chair was among pieces that we stored away. 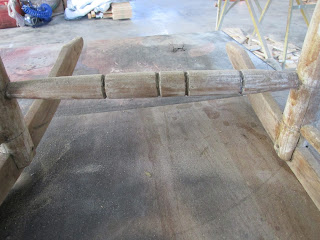 Our first Kentucky home--the yellow house--was a small 1980 ranch with no room to fit
all of our furniture.
We had to edit our belongings to suit the space.
Perhaps unwisely, the rocking chair saw several seasons on the covered front porch.

Last month I brought the chair out from the muddle in the basement storage room.
I was dismayed to see how very fragile and weathered it had become.
In a practical sense it is probably unsafe for anyone but a slender youngster to use.
It wouldn't stand a good galloping rock.

Still, I couldn't let it go.
I dusted away the cobwebs and carried it across the drive to Jim's workshop.
When I went out several days later I found that he had applied wood glue to many of the
cracks and fissures.
I undertook some careful hand sanding and on a day when sunlight streamed through the south-facing windows, began to apply paint.
Working with the chair I noted some features which suggest it was home made, or at least mended over the years by a home craftsman.
The lower back rung appears to have been repurposed from another chair; possibly one or two of the spindles replaced.
The chair, with other household chattels, would have been ferried across Lake Champlain
to Orwell, Vermont when my great-grandparents and grandparents bought the farm there in 1913.
It had most likely been in one of the family homes in the hamlet of Hague, New York. 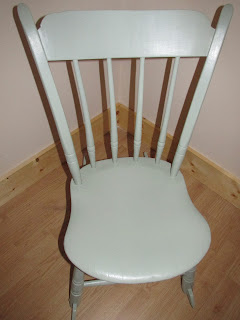 The chair has been lovingly refurbished with two coats of 'Apple Grove' satin paint--the color is close to what I remember of the original and is the paint I purchased to refinish the hutch/bookcases Jim bought for me several years ago at a local auction. 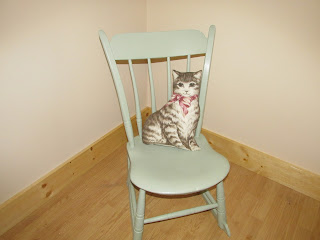 Eliza's rocking chair now has its place in the small guest room.
I intend making a cushion using some of the toile fabric left from the curtains.
Perhaps this delicate treasure should wear a placard such as one sees in a museum display:
Do Not Sit On The Chair 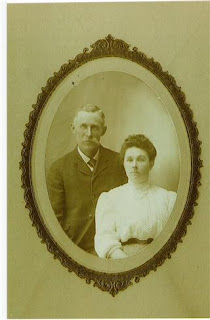 Eddie and Eliza [Bartlett] Ross
The formal portrait isn't dated.
I believe Eliza [in reality my step-great-grandmother] was in her mid 40's at the time.
Great-grandfather Eddie was 10 years older.