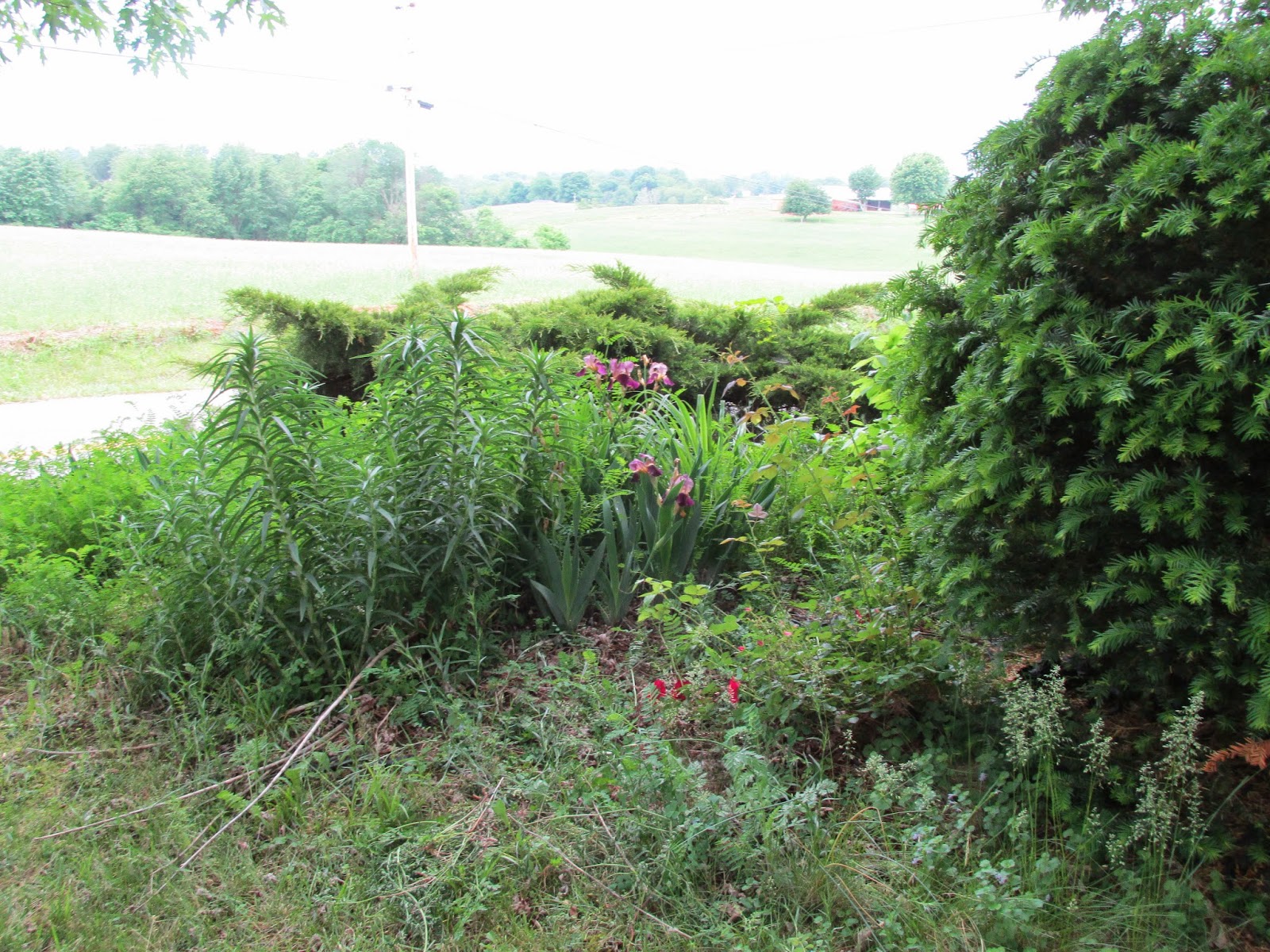 All photos in this post are of the existing plantings at the 'other house.
This is at the western boundary. There are two evergreens, one appearing to be some variety of juniper.
Iris and a rose are huddled in the tangle of weeds which have thrust through a barrier of landscape paper.
Earlier, creeping phlox and candytuft were in bloom on the far slope. 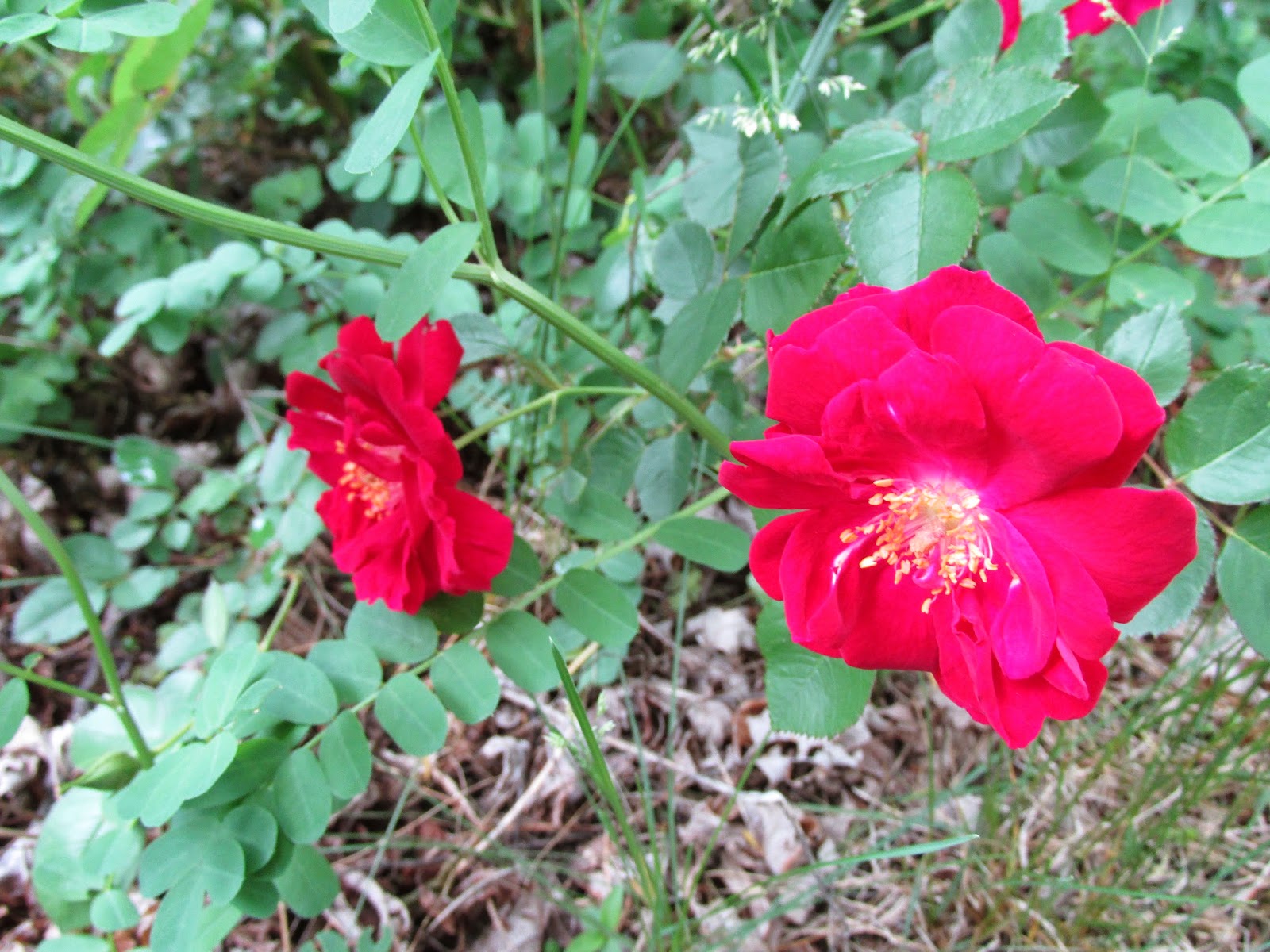 The rose has bloomed in spite of being quite shaded. 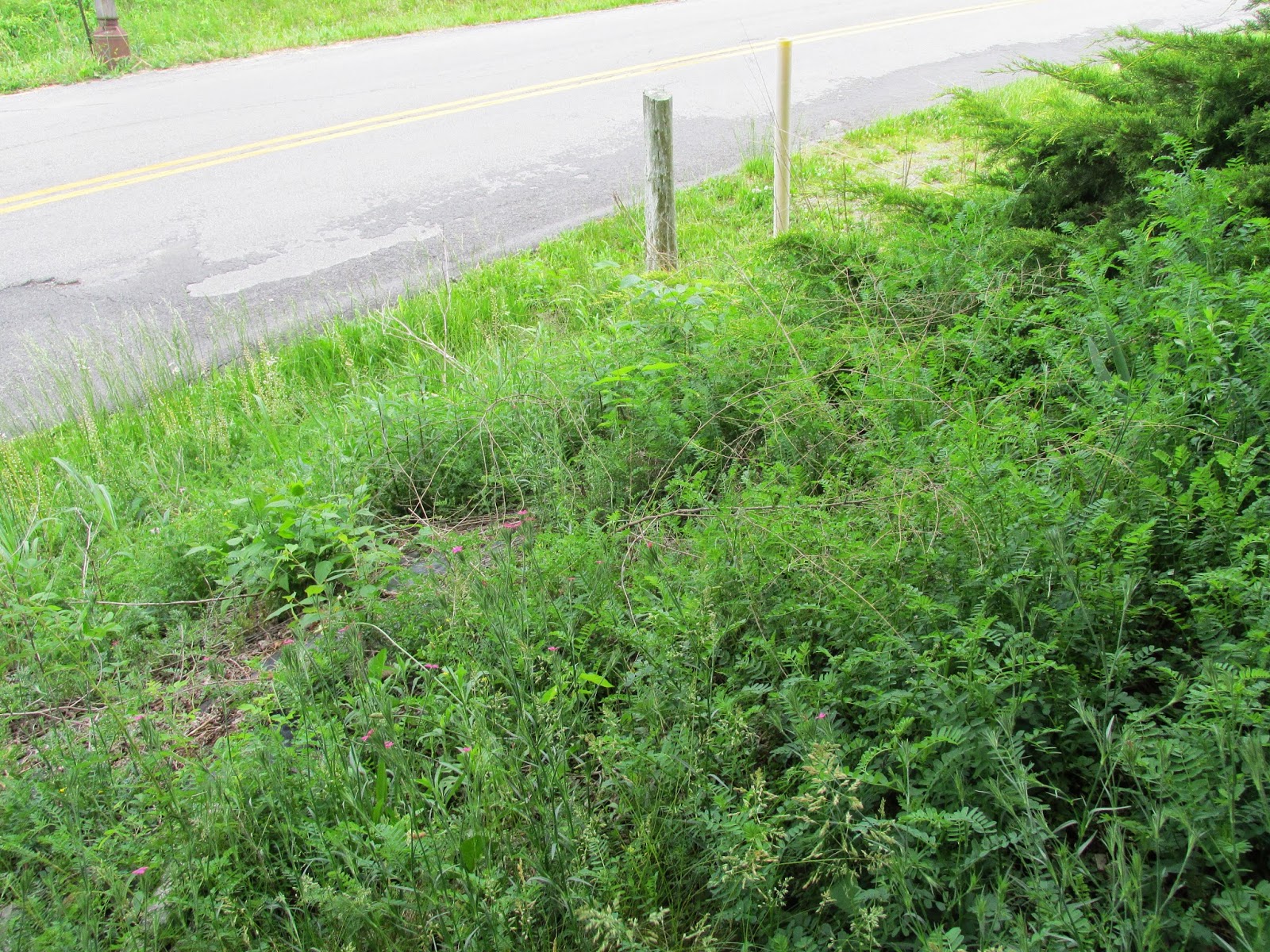 This bank slopes sharply to the road. Some effort has been made to establish iris and a few lilies, but the area is rank with vetch and other weeds.
I doubt I can tackle it this summer. 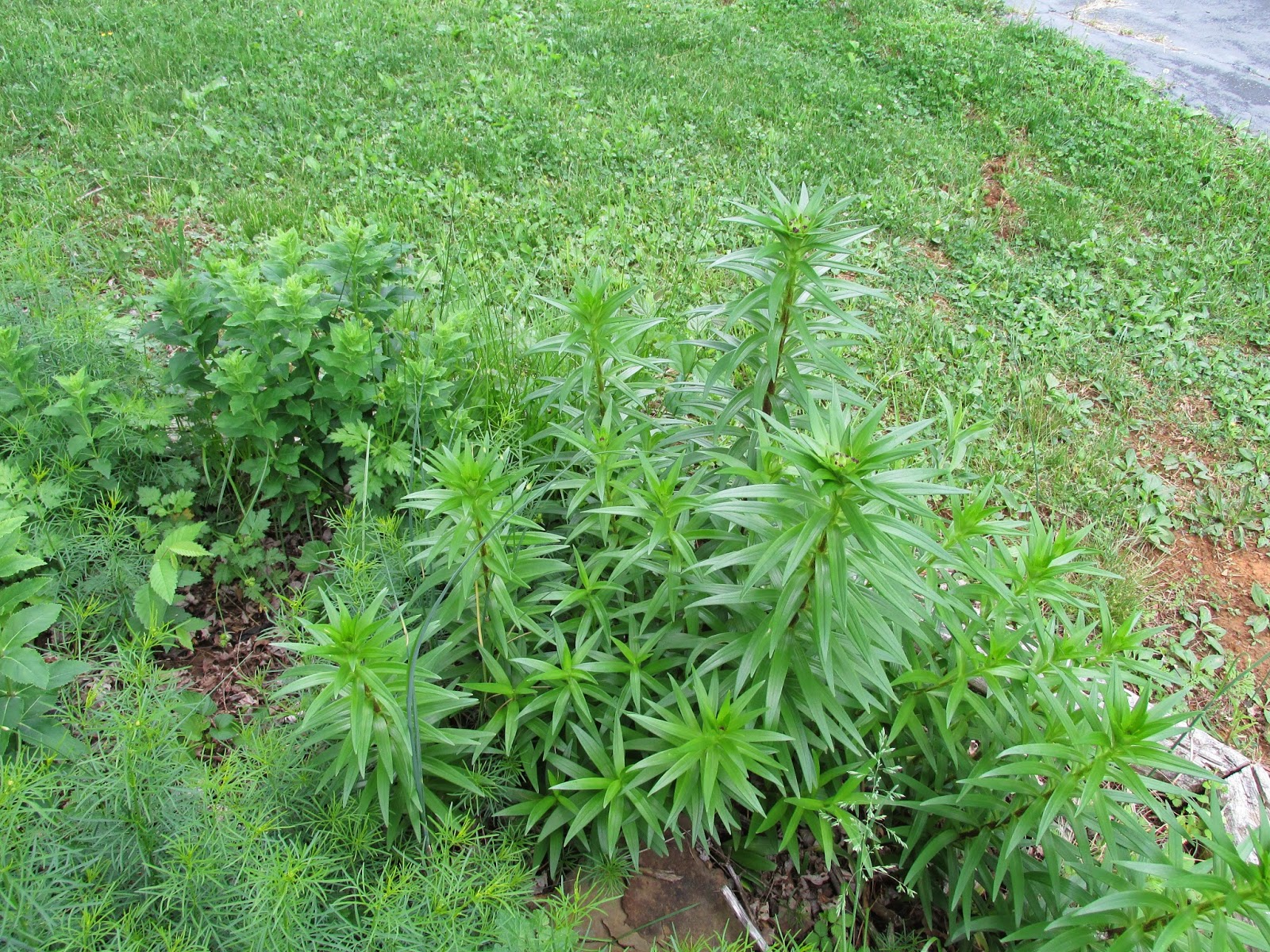 A small circular bed on the front lawn is home to tree lilies and a peony.
J. hacked through weeds on top of landscape fabric to set in divisions of tree lilies which I brought from home. 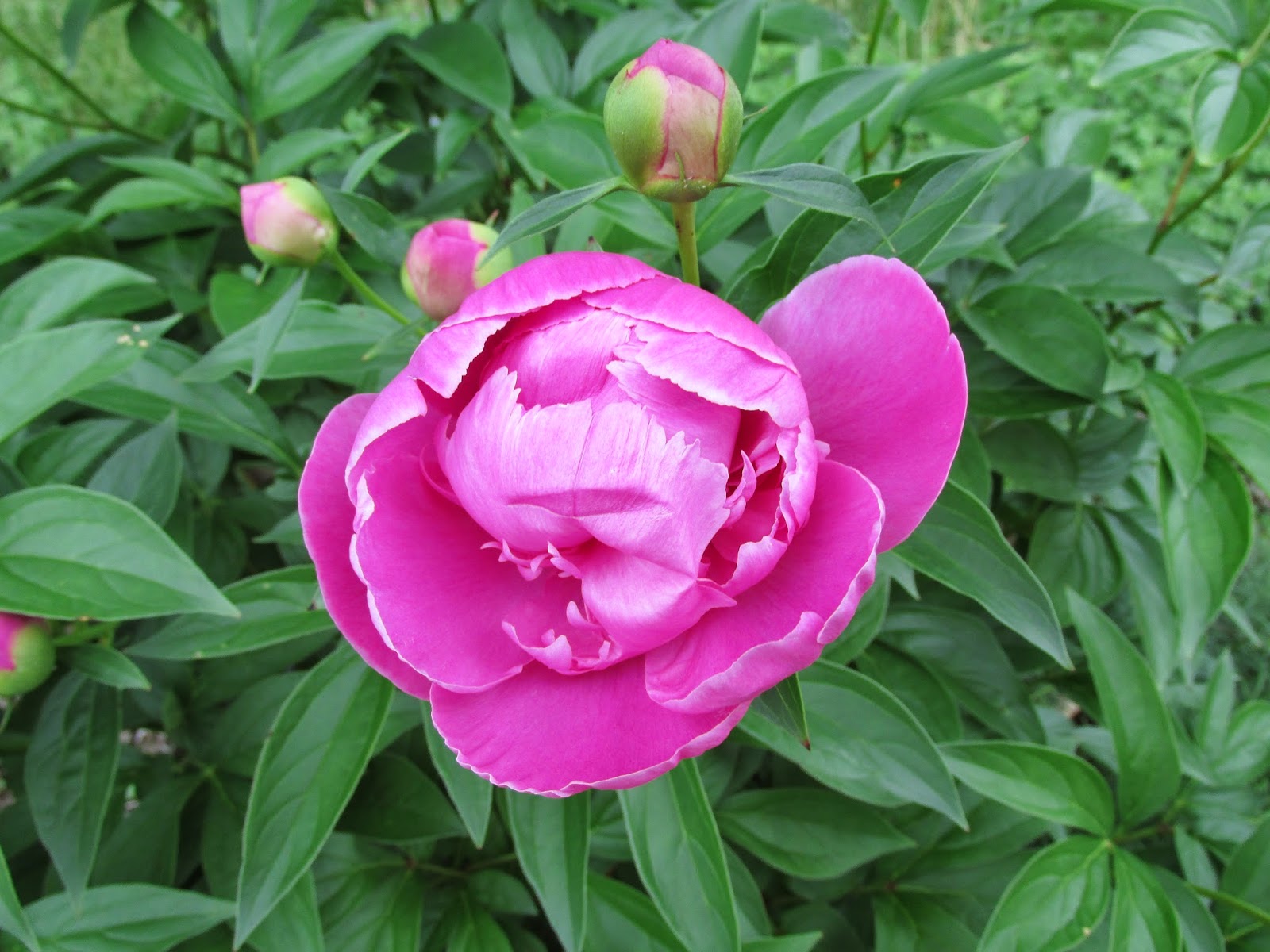 The peony is well established--a shade of rosy red which I don't have in my 'collection.'
I spent several days last week dividing plants at my 'home' garden and hauling them to the other house.
Common sense tells me that I need to down-size.
When I go into my gardens here I yearn over plants that must be left behind.
A garden is an evolving creation.
Surely as my new plantings establish and fill in I will enjoy them.

While I was digging, planting and watering, J. and H. labored on in the house, removing layers of painted on wall paper, scrubbing dingy ceilings, applying texture and primer.
From time to time I went inside to gather up strips of sodden wallpaper and carry them out for later disposal.
Howard experienced problems with the transmission on his truck driving across country, so it had to be delivered to a repair shop on Monday.
Another trip was made to Ace hardware for several gallons of primer.
On Monday evening we went to a local auction to bid on an oak table and chairs. The auction house is a rather unsavory place--blue with cigarette smoke even in summer when the doors are open.
Much of the goods on offer are cheap and shoddy, but there are usually some good pieces of furniture on the block.  The bidding quickly went high on the oak set--higher than J. had determined to pay.

J. and H. were off early on Tuesday morning while I dug more plants and loaded them into the van.
I made a stop at Wal Mart for bottled ice tea, fresh fruit and snacks to fortify the painters.

On Wednesday, my gardening on hold, I attacked the dining room wall paper. This was pasted on with a substance very resistant to my efforts at removal.
I picked, peeled, pried, freeing up small patches at a time, feeling frustrated.
J.'s sister and her husband were expected in from Ohio, planning to stay overnight before continuing on to the family wedding in Florida.
I hurried home, showered, and prepared a good supper.
Chuck very much wanted to help with our renovation project so he cheerfully climbed up on a step ladder the next morning and began removing wall paper border while Jane and I sponged and peeled that
wretched wallpaper.
By mid-afternoon Chuck and Jane were on their way, intending to find a motel for the night to break up the remainder of the journey to Florida.
Howard's repaired truck was ready to be retrieved, so we quit work a bit early and drove him to the transmission shop.
The phone was ringing as we came in the door at home.
J. snatched it up and I listened with growing dread as he exclaimed, "An accident?  Where? "
Our dear sister and brother-in-law had been involved in a crash which totaled their car after traveling a mere hour away. Jane was chatting with Gina on her cell phone when their car was rear-ended by a pickup truck. The driver, a young man, emerged from his own damaged vehicle and apologized saying that he 'must have fallen asleep!'
At the moment of impact Jane's phone flew from her hand and landed somewhere in the crumpled back seat.
G. on the other end heard the crash, could hear voices, so knew that C. and J. were alive.
There followed a frustrating hour of trying to contact them.
They, meanwhile, were being whisked to the ER strapped to backboards and unable to answer their phones.
Eventually we learned where they were, so J. and I went tearing off to the rescue.
Both were shaken, achy and distressed, but not seriously injured.
We waited through the long process of X-rays, paperwork and protocol until they were finally
released at 10 PM.
None of us had eaten since noon.  The only place still open was a drive through where we settled for fries, chicken on a bun and Coca Cola!
Home at last--and all of us too over-tired for a decent night's sleep.

Jim and Chuck were on the road early Friday morning to track down the wrecked car at the impound yard  near the crash site and retrieve their luggage.
Jane and Chuck's daughter and son-in-law would be flying in to the tiny airport in the next county to take them home to Ohio. The sleek company plane was already parked on the tarmac when we pulled into the parking lot.  The family rushed out with hugs and greetings that of necessity quickly became good byes.

Today J. and I have done almost nothing.
We didn't leave our own dooryard.
We rounded up the cats and administered the monthly application of flea prevention.
We sat on the front porch, watched birds, ate a meal of leftovers.
J. took a nap. I curled on the wicker loveseat with a book which kept falling into my lap as I nodded off.
This evening I walked along the row of full blown roses in my garden.
We checked in several times with Chuck and Jane, not at all surprised to find that they too had opted for a very quiet day at home.
Tomorrow another week begins.
We are all agreed that quiet monotony would be preferable to the uproar of last week.