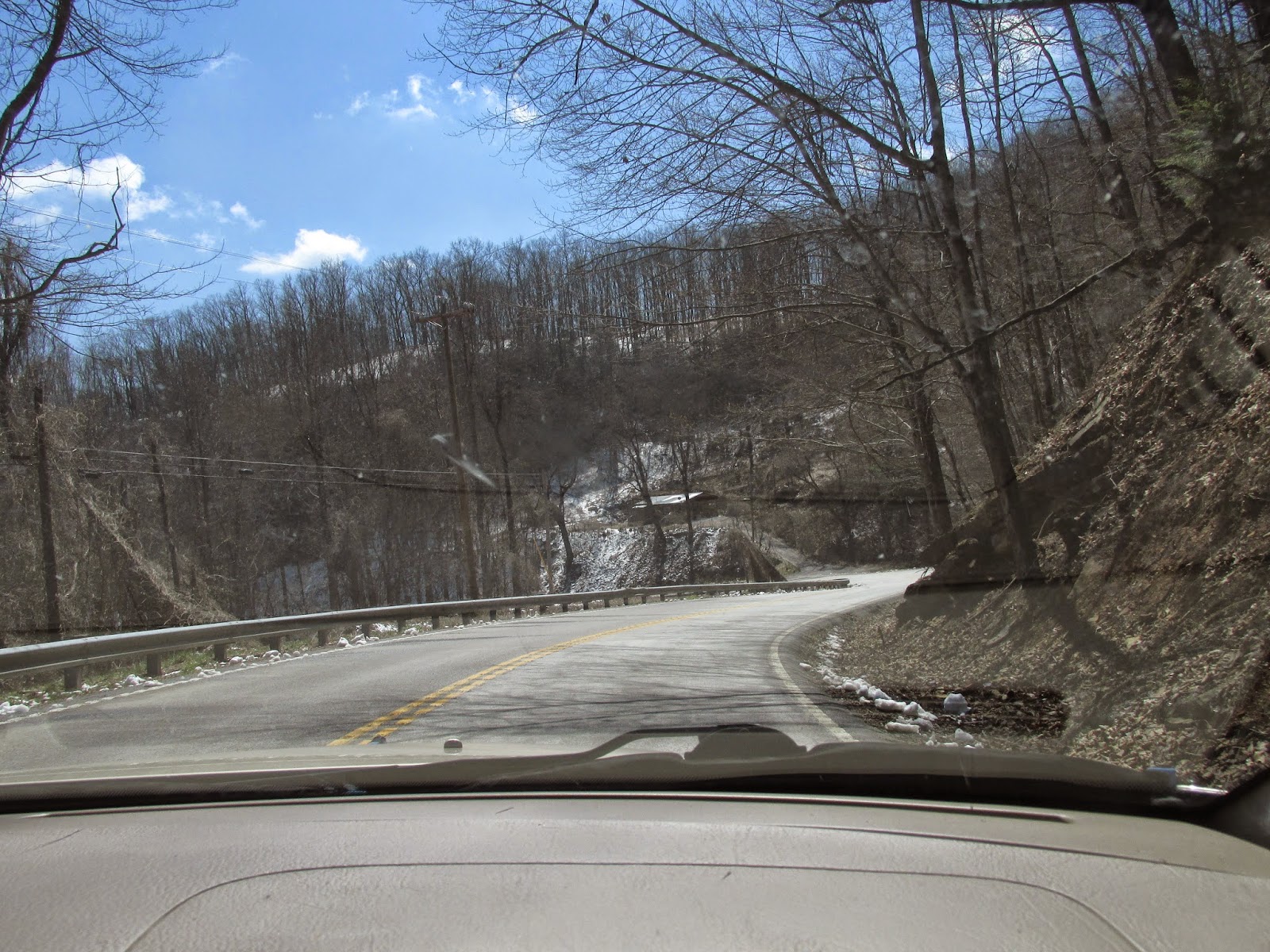 It is difficult to lure me from my home.
I'm not the easiest of travelers, don't like to leave my pets, prefer my own bedroom to even a very nice motel. I don't care for trips with deadlines and group agendas.
I enjoy seeing places which have a connection with someone or some event that I've researched.
For more than a decade we have talked about traveling to North Carolina to the home territory of Jim's paternal family.
There has never been time to make the journey until now--when J. simply declared that we were
going to do it.
We left home about 9 A.M. this Sunday morning, stopping after 2 hours for a meal in London, KY.
Eastern Kentucky is coal country--dark and forbidding.  Small hamlets cling to creek banks with only a shallow bit of ground between houses and the winding roads, with the mountains looming behind.
Rather than drive thruways, Jim chose the mountainous route through the Cherokee National Forest.

If you are of a certain age, you might recall the movie, Thunder Road, starring Robert Mitchum.
It is the tale of a moonshine runner and his dare-devil trips with the 'revenuers' in pursuit.
The torturous road from Hazard to Harlam, KY, through Pennington Gap and down into Bristol, TN is a similar route. 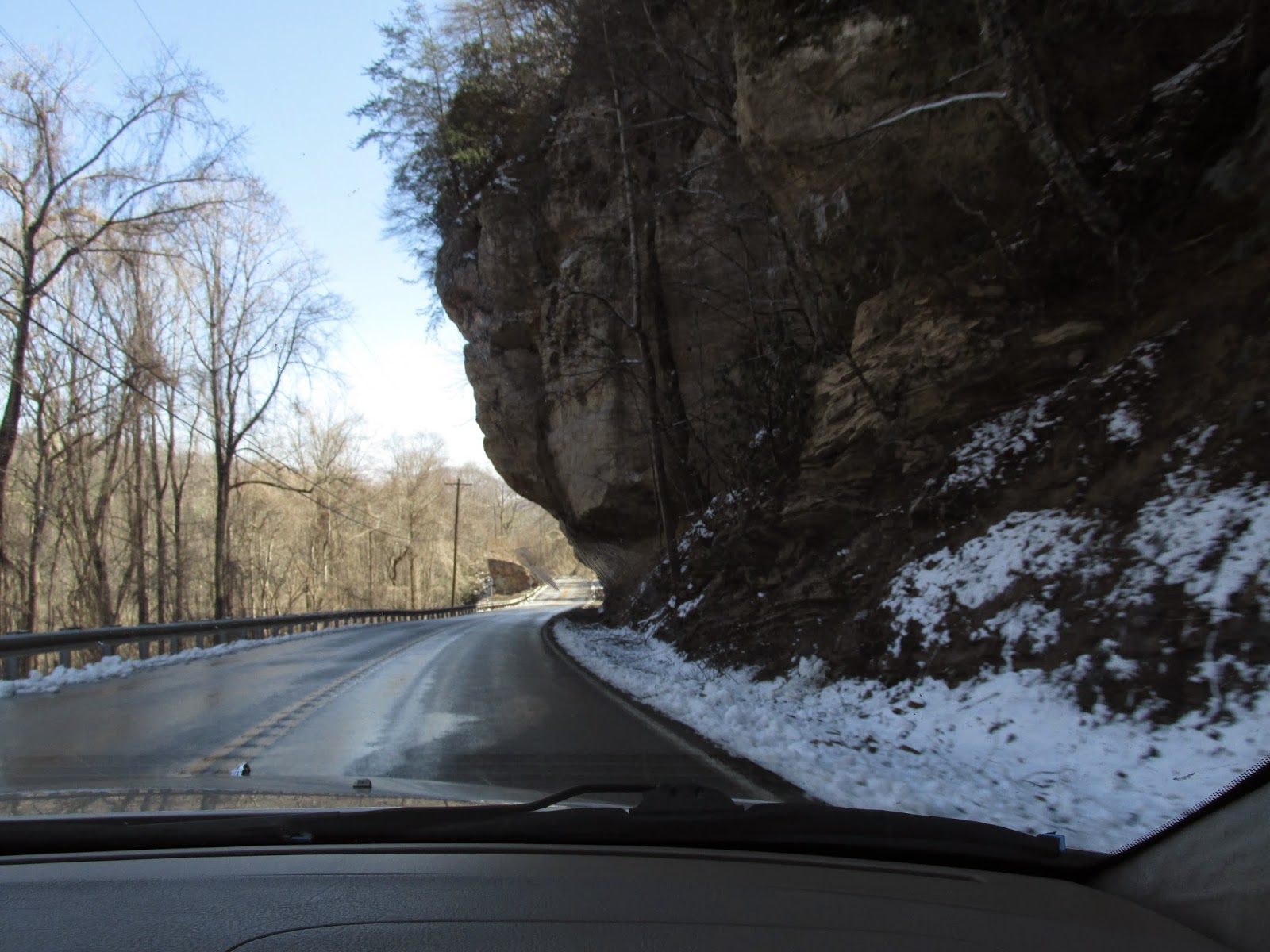 The road cuts through walls of rock on one side with steep ravines falling away on the other side.
A light snow fell last night leaving the road wet in places. 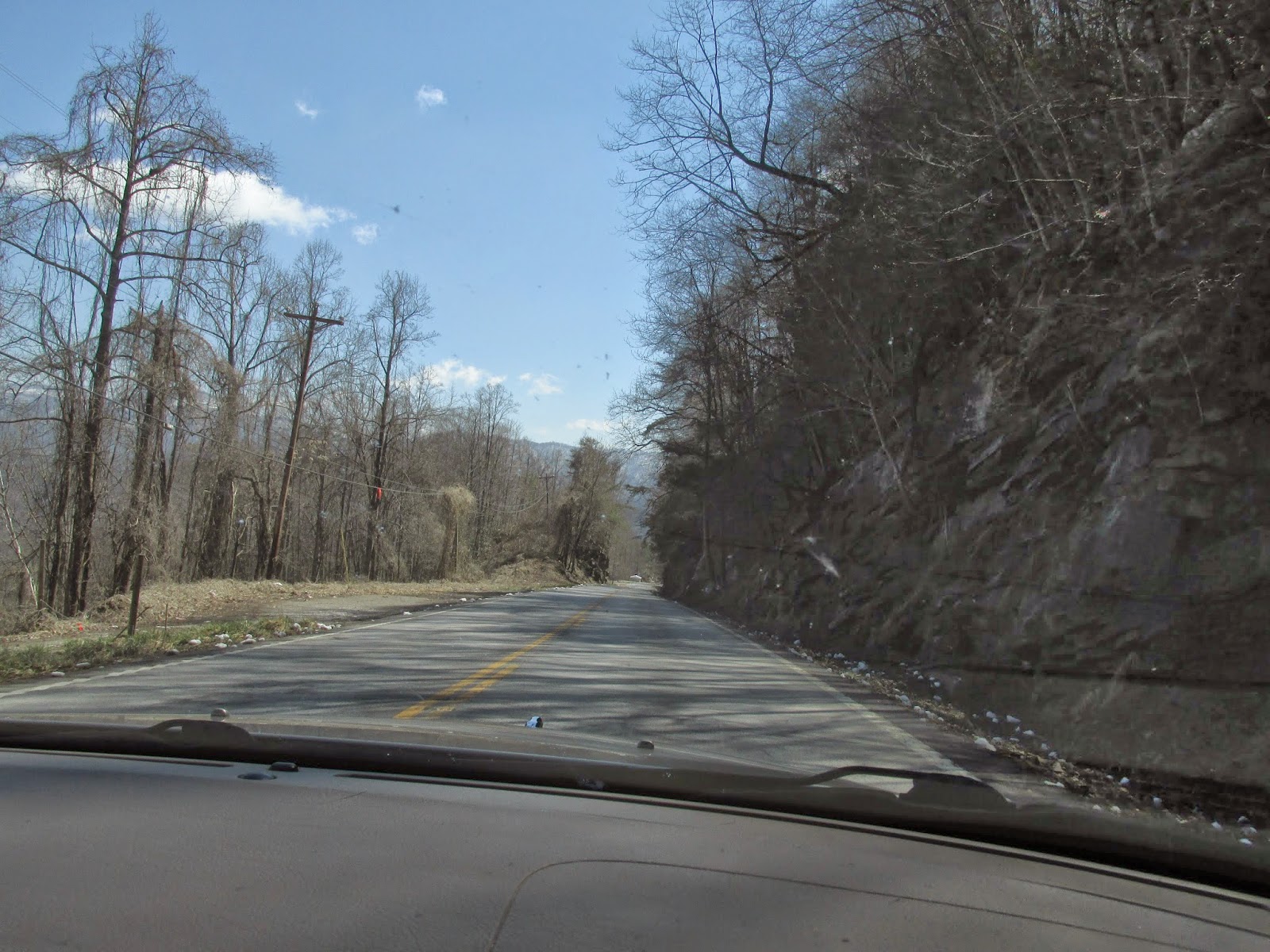 My photos were taken as the car roared around double and triple 'hairpin' bends.
I doubt I could be persuaded to drive this road in the best of weather. 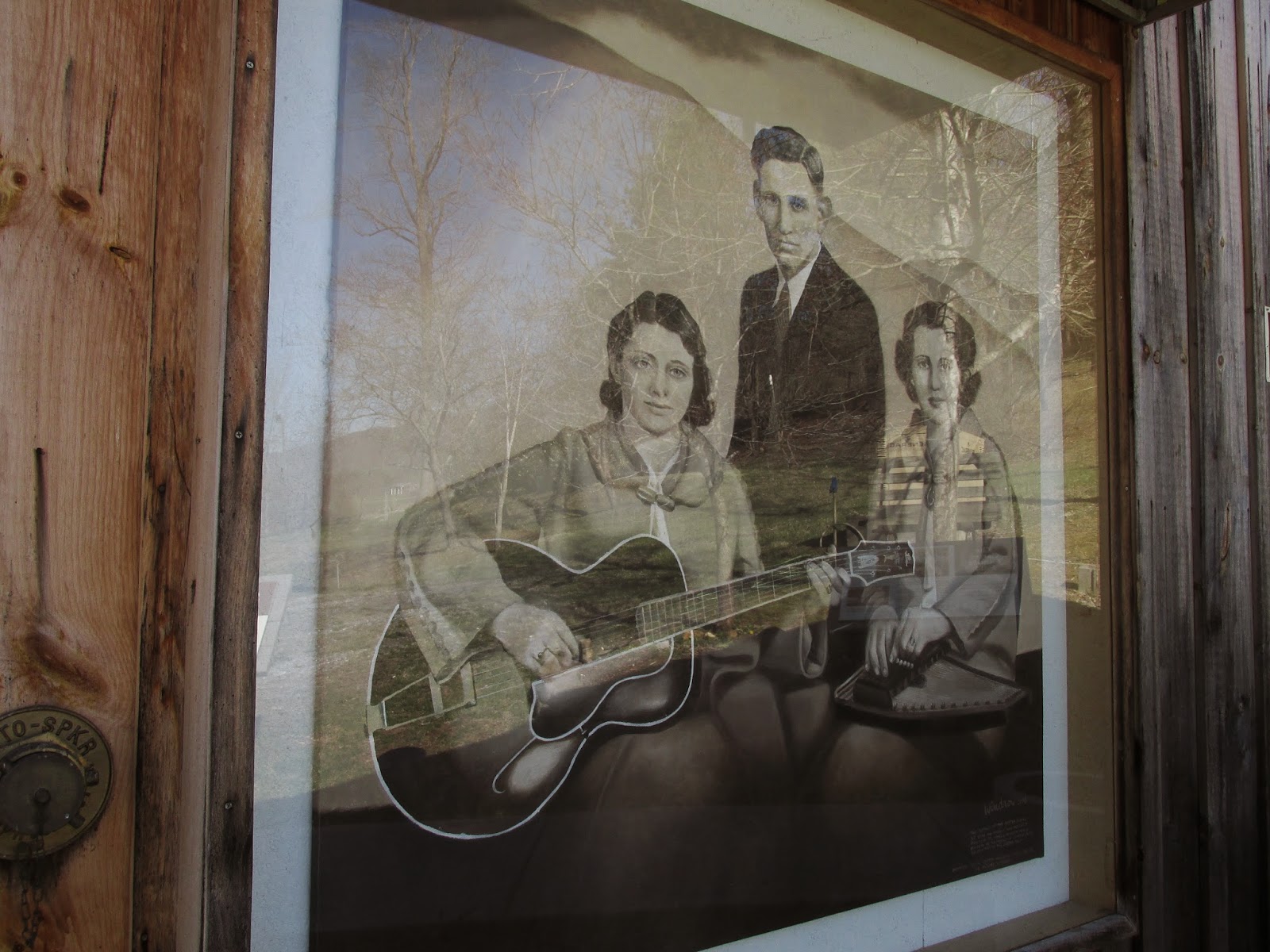 Bristol, Tennesee is the site of the so-called Bristol Sessions where a talent scout for RCA Victor engineered the first recordings of the later famous Original Carter Family, A. P. Carter, his wife, Sarah, and her cousin Maybelle, wife of A.P.'s younger brother Ezra 'Eck' Carter. 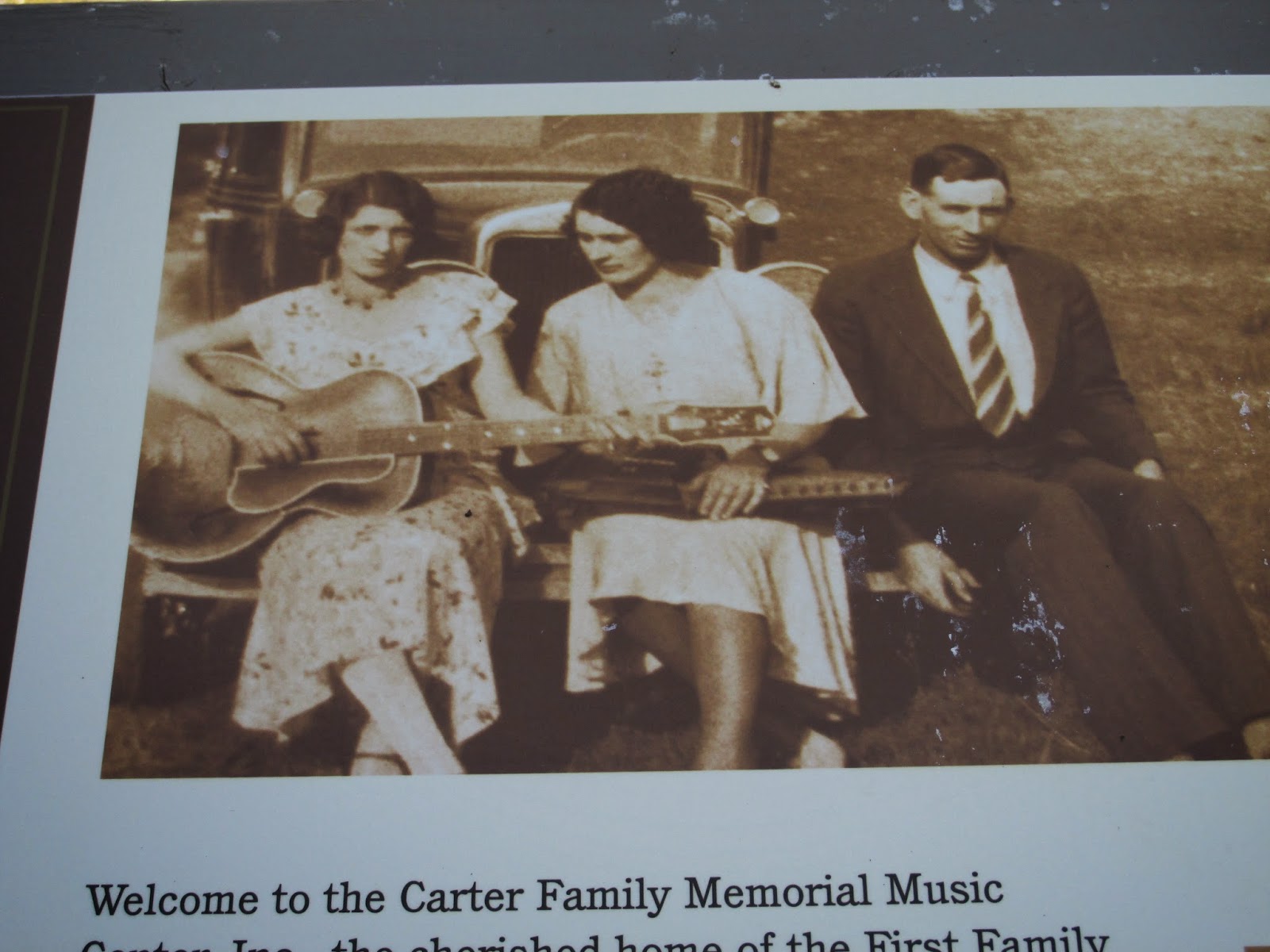 I knew we were traveling in the general location of the Carter Family home tucked into the mountains near the border of Virginia and Tennessee.
We passed the turn-off to Big Stone Gap, familiar from the novel of the same name by Adrianna Trigianni.
As we drove into the hamlet of Hiltons, VA, one of those scraps from my mental rag-bag sifted out.
This had barely begun to register as Carter home  territory when we passed a sign post for
A.P. Carter Road.
I had no trouble persuading Jim to turn around and drive the 3 miles to the Carter Family Fold, the
rough-hewn auditorium where descendants of the Carters have carried on their musical tradition. 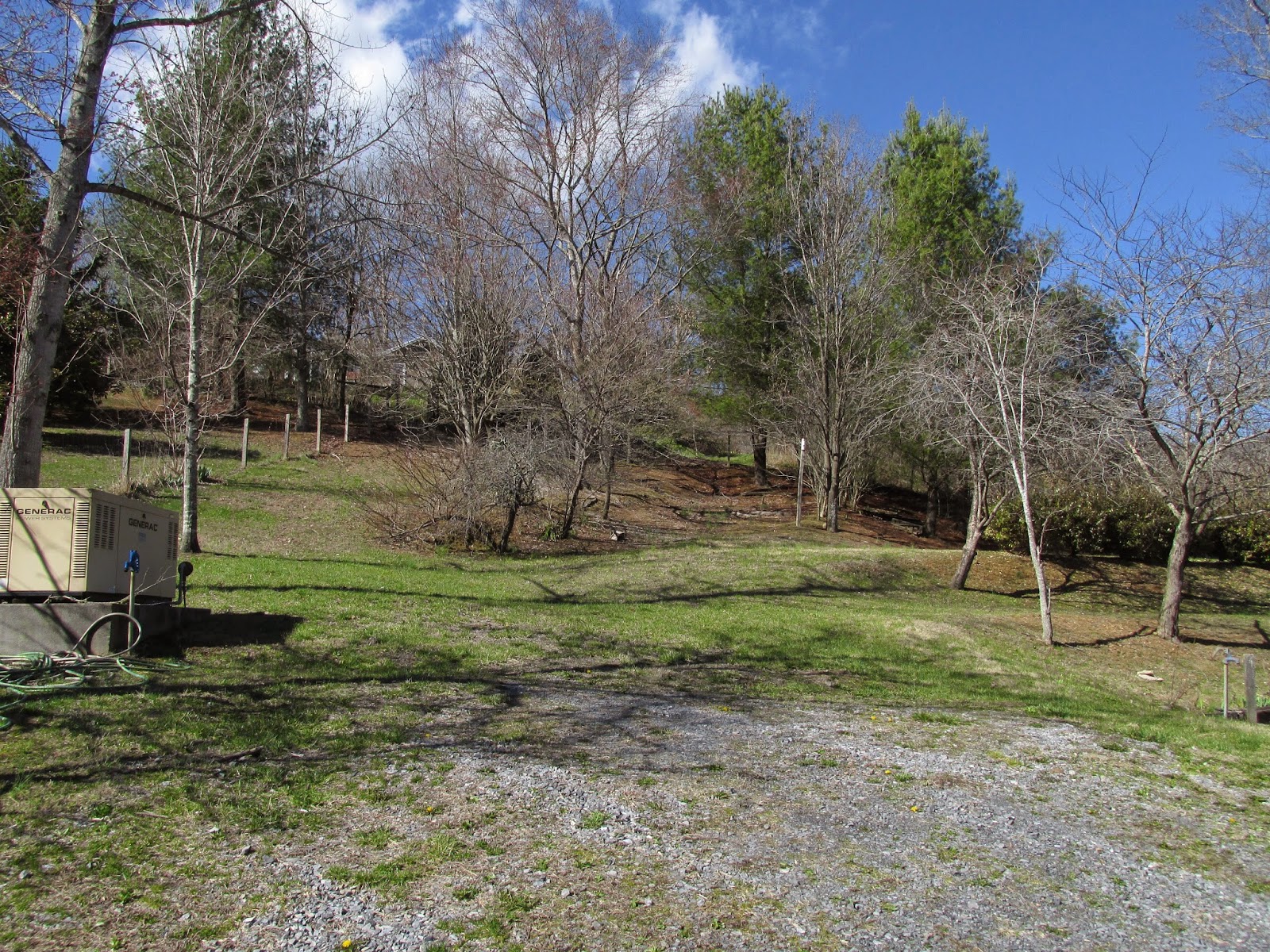 A view of the hillside behind the Carter Fold.

The little general store which A.P. Carter kept, rather haphazardly, in his old age.
A.P. had never been a good provider, lost in his search for songs to perform and record, while Sarah struggled to care for their children in their primitive mountain setting.
Sarah and A.P. eventually divorced, she married his cousin and removed to California.
It was left to "Mother" Maybelle Carter and her daughters to
perform as the Carter Family.
June Carter would marry Johnny Cash, blending her family's music tradition with his. 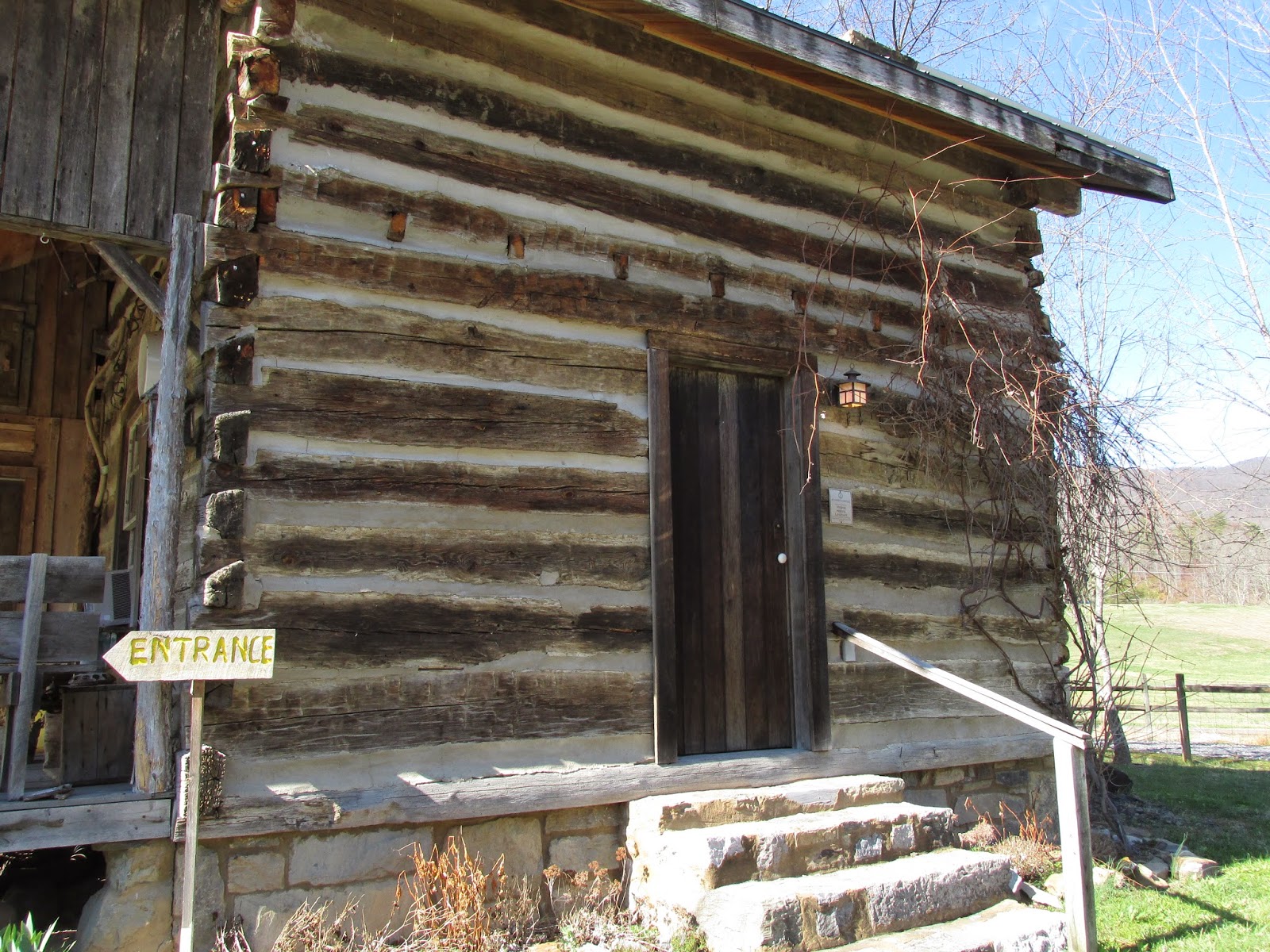 The tiny cabin where A. P. Carter and siblings were raised has been moved and reconstructed a few hundred yards from the 'fold' and the store. 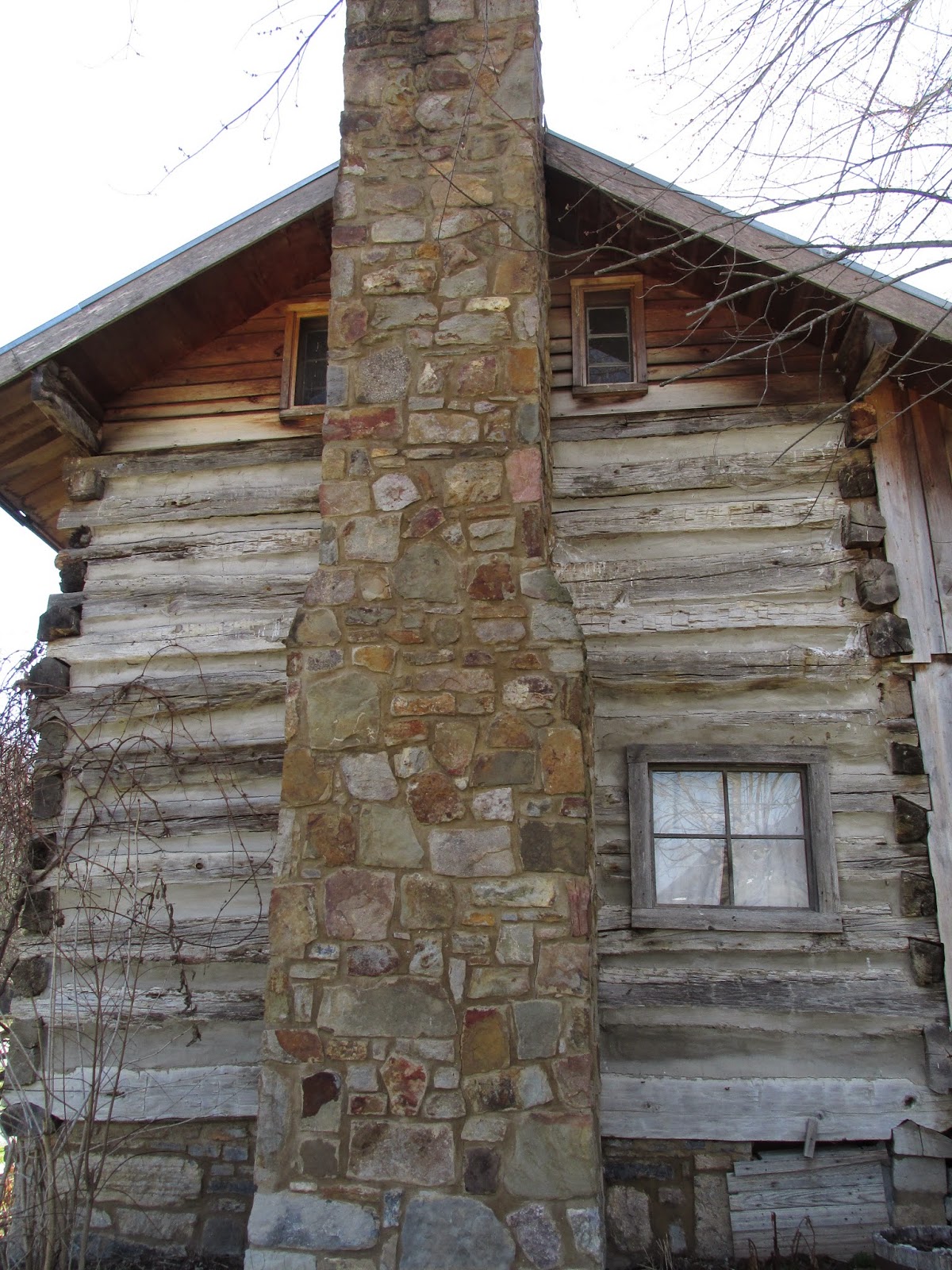 Jim remarked that the cabin in its restored state is likely far more sturdy than it was at the time of A.P.'s birth. 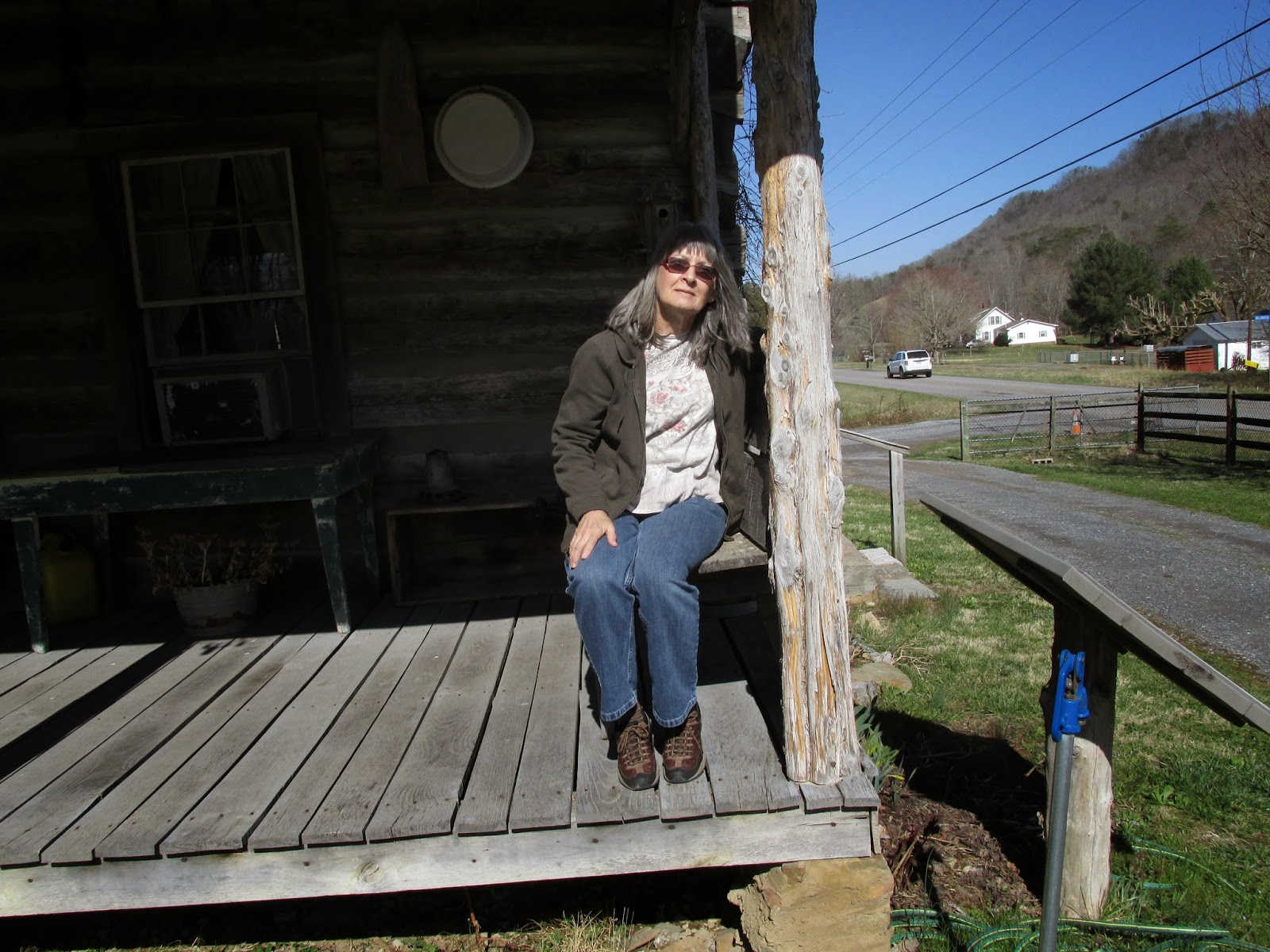 The angle of the late afternoon sun was wrong for taking good photos, but Jim did his best, posing me on the front porch of  the Carter cabin. 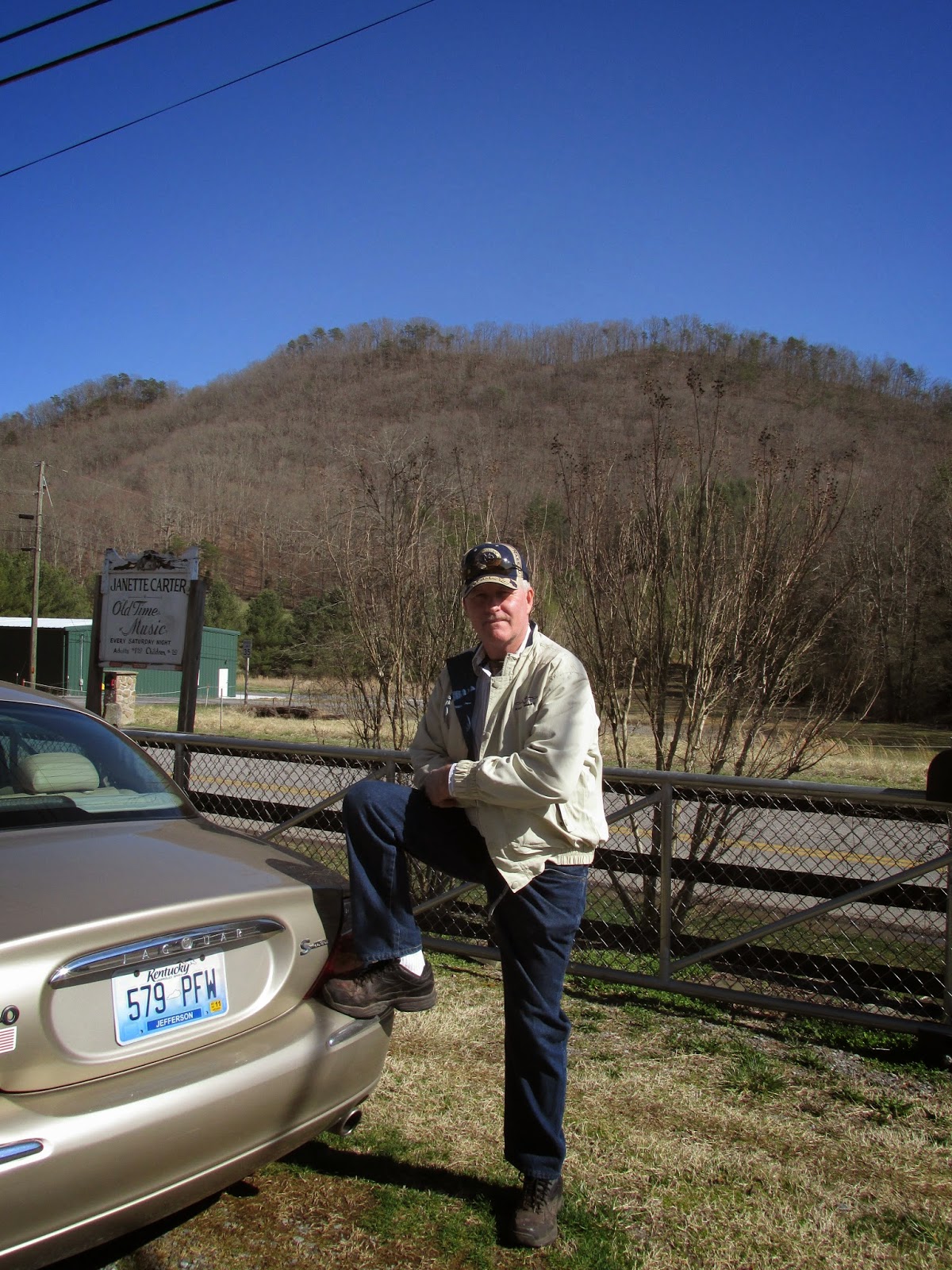 I think all photos of Jim on this trip are likely to include the car which is the fruit of his latest
wheeling and dealing.
I have to state that while we could never purchase such an automobile 'new', its a very comfortable ride--and it took the steep winding mountain roads like a trouper.
It was chilly tonight when we walked from our motel room to a nearby restaurant.  We're reminded that we're at an elevation where hints of winter are lingering.
Tomorrow our route will take us to Greenville, NC, shire town of Pitt County--the stomping grounds of long-ago Whitehursts.