A Brown Sort of Day 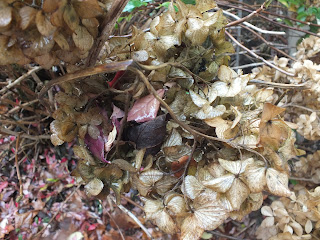 Hydrangea, rain battered and then wind-dried, outside the west window.

No sunshine yet again, although the temperatures are mild.
I got up to cough--build up the fire--cough, feed cats--cough---make the coffee--you see the pattern of my recent early mornings!
Edward the Cat streaked through the sliding door carrying a small alive mouse, with a gang of cats in
hot pursuit.
They rampaged down the hall and burst into the bedroom where J. had one long leg out of bed.
'What?' he exclaimed, as the entire contingent thumped about under the bed.
"Catch the mouse!" I replied, and went back to the kitchen.
When J. appeared moments later I asked after the mouse.
'Oh,' he said, rather vaguely, 'I think it's gone into the closet.'
Several cats were bumbling about near the closet's bi-fold doors.
I flung them wide and began hauling out boots, canvas carrier bags, a bin of wooly socks.
The mouse was huddled against the back wall.
J. was pouring his coffee.
"Come and get the mouse!" I demanded.
He put on his gloves and in a moment had the creature cupped in his hands.
To my astonishment instead of releasing it outside, he flushed it down the toilet, while the feline gang observed.
I was a bit taken aback by this.  I only flush dead things!
Oh dear.
[Edited to add that the mouse had been quite badly 'wounded' by the attentions of the cats, so this was a merciful end!]
I suppose if it had been released outside, already traumatized and somewhat damaged, it would have been retrieved and fetched in again.
A bit of a grisly start to the day. 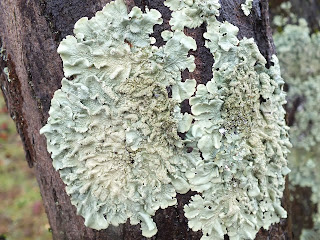 Lichen on the redbud tree by the mailbox.

J. went out to feed Pebbles while I sliced potatoes and onions to fry for breakfast.
Edward the Cat was noisily sick on the bedside rug.
Fortunately I was aware of this before stripping bedding to take downstairs to the laundry.
Edward crouched, looking on dolefully as I fetched a bottle of lemon-scented cleaner, paper towels, a scrubbing brush.
I pegged out sheets, knowing they wouldn't get completely dry on such a dull day, but hoping they would gather the fresh scent of cool air and the wintery smell of wood smoke.
Walking back from the clothesline I spied Nellie, rolling about behind the van, then prodding at something which lay still in the gravel.
My suspicions aroused, I tip-toed near enough to recognize a garter snake.
I ferreted J. out of the shop to dispose of this unwanted article.
He prodded at it with the wrench he was carrying, then, seeing that it was alive but sluggish with cold, he carried it to the brush pile by the upper garden and tossed it into the depths.
I'm not liking that brush pile and have intentions of moving it down to the burning area behind the garage.
Who knows what might take up residence in a brush pile over the winter? 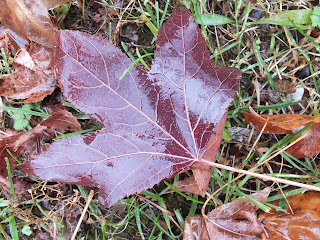 A leaf from the sweet gum tree, gleaming like waxed mahogany.

The day went on--noon looking as still and dull as early morning.
I made 4 loaves of oatmeal bread.
I creamed butter and sugar for a batch of chocolate chip cookies and discovered that J. had fried the last of the eggs at breakfast time.
[I usually trade baked goods for my neighbor's free-range eggs--but haven't done that while we were ill.]
I needed to wait til the bread was baked before driving to Wal Mart for eggs.
I was feeling very tired, yesterday's sense of recovery and strength had evaporated.
I tottered to the store, finished baking cookies, prepared supper.
Baked potato, sauteed salmon, canned green beans from last year's garden.
I think it was the 3 cookies for dessert that gave me a bit of a boost!
Tomorrow is another day--mid-week already......