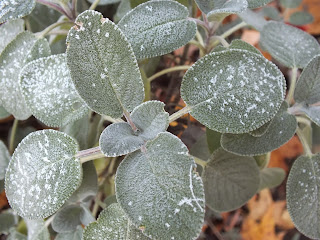 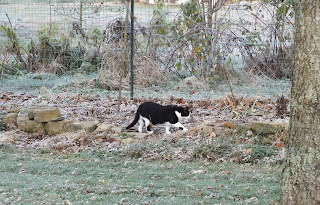 Edward prowls along the frosted untidy strip of garden where the vintage peonies grow--and where I have moved iris divided from the many existing plants in the dooryard.
The area is full of tree roots and once leaves come out, is quite shaded.
Efforts to establish other plants there haven't been successful, so a peony and iris strip it will remain, having a few weeks of springtime glory before reverting to a weedy tangle for the remainder of the summer. 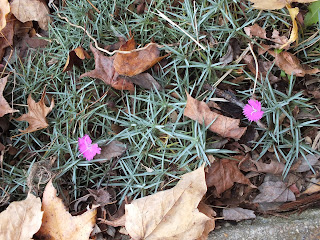 Two bright pink flowers linger on a clump of dianthus in the herb garden. 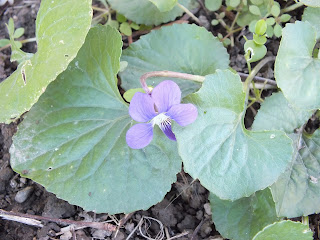 I don't recall violets flowering in previous autumns. There are a few lurking beneath the Knock-Out roses.
The color is more intense than in the photo--I took several, but none of them show the true red-violet color. 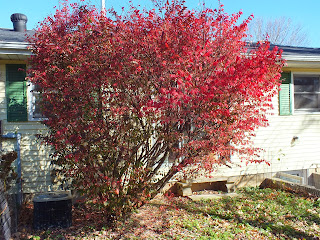 The burning bush [euonymous] is rather nondescript for most of the year.  It comes into its own as a last lingering point of autumn color.
During our first season in this house--when our felines residents were strictly indoor personages--the bush was a favorite place of cardinals. They have become rightfully wary with the advent of cats who have access to the dooryard.
We were pleased to watch two females and a male yesterday while eating breakfast--the three birds bounced about in the branches eating the tiny red berries. 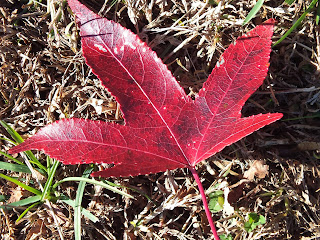 A leaf from the sweet gum tree.
This tree has suffered [we think] from having other trees planted too closely around it.
It has lost several branches during our tenure and is mis-shapen.
It is my favorite tree in the yard--in spite of the spiky 'gum-balls' which it sheds each autumn.
The leaves are beautifully shaped and color to deep gold, red and burgundy, clinging to the branches after the maples are bare. 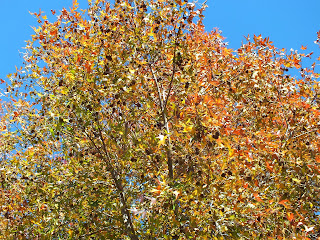 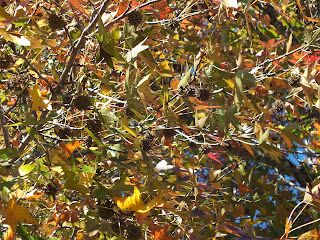 Zoomed view of the seed balls. 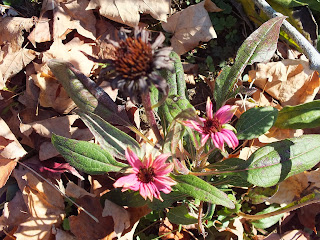 Coneflowers on a seedling plant--frost seared. 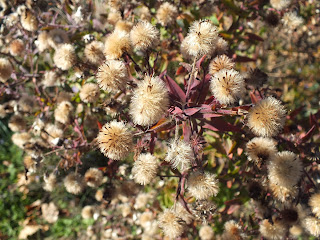 The dusty purple of the Michaelmas daisies is only a memory.
Soft fuzzy seed heads have replaced the flowers. 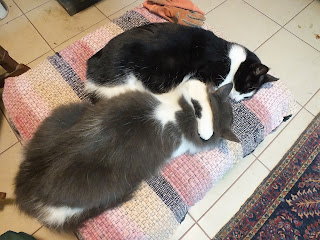 I made a fire downstairs early Sunday evening and took out the vividly colored quilt in progress.
My presence downstairs, especially if I have a fire, attracts feline companionship.
Edward and Nellie are sharing the leather ottoman.
All our upholstered furniture has been scared by a generation or two of cats.
Rugs, old quilts and blankets on chairs and sofas give things the look of a rag-tag second-hand shop! 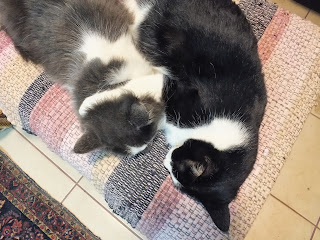 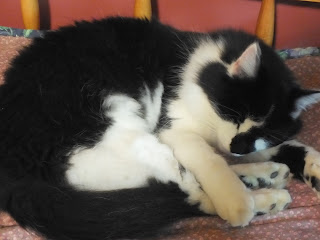 Fetching Bobby indoors at night can be a challenge.
He appears when I call him, but then darts under the truck--or whisks off into a hedge.
Once I have cornered him and brought him,struggling, into the house, he subsides into
companionable placidity. 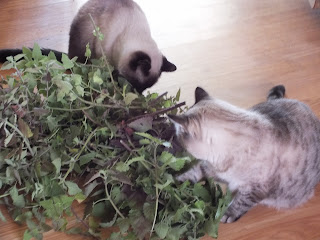 Monday warmed into another lovely golden day.
J. was back on firewood detail with grandson D. to help.
[I wasn't disappointed to learn that my labor was dispensable!]
I pottered about outside and noticed a very lush stand of catnip growing in the upper perennial strip--where I had vigorously uprooted catnip in July.
I cut an armload and brought it inside, dumping it on the dining area floor while I got out baking sheets for drying it. 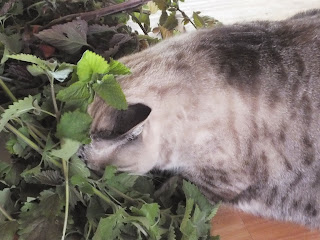 Predictably, Teasel noticed it immediately and came over for a enthusiastic sniff. 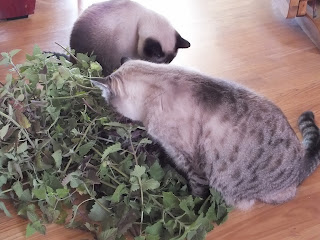 Chester and Teasel rootling in the catnip. 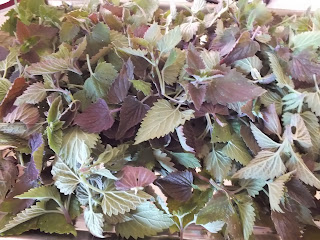 Usually when I dry catnip I am rushing back out to garden chores and in the interest of saving time, thrust the whole stalks onto baking sheets and into the oven on its lowest setting.
I took a few minutes this time to strip the leaves from the stalks, filling 3 trays which fit in the oven for one session. 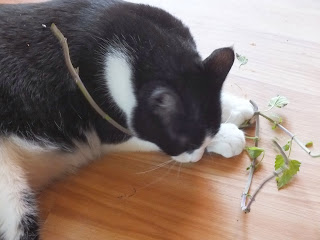 As I worked, I tossed the stalks on the floor--Edward was quite inspired. 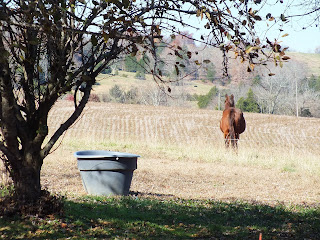 I had carried an armload of wood in by way of the basement stairs and was emerging when I caught the faint cries of sandhill cranes overhead.
The cranes have harsh cronking voices, unmistakable.  I first heard them in Wyoming where the birds arrive to nest on the high plains, usually finding a stream or creek where they can raise their young.
In late winter and early spring they, along with Canada geese, are in residence, by the thousands, along the North and South Platte rivers in Nebraska.
Pebbles, who never misses a thing, stood with her ears pricked until the calling of the cranes faded
down the valley.
I fetched my camera, but none of my attempted shots caught the wedge of birds.  I was shooting directly into the sun, on zoom, and couldn't see the birds in the view finder. 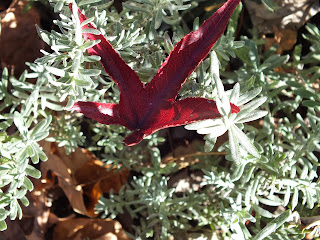 This patch of lavender was at head level as I came up the outside basement stairs.
The red leaf caught my attention and prompted me to cut some lavender to bring inside.
There were few lavender flowers this summer, perhaps because it was too wet.
I cut a nice bunch of fragrant stalks and went back for stems of lemon balm as well.
Lemon balm is usually one of the first herbs to blacken with frost, but thus far most of its shiny crinkled leaves are still green. 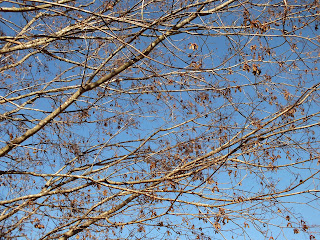 I am blessed to have lived always in the country, blessed that I was raised by folks who observed and appreciated the subtle changes of the seasons and instilled that awareness in me.
I may grumble over a long spell of hot and humid summer days or cringe when temperatures drop way below freezing, as in the well-remembered long winters of New England and Wyoming.
Occasional complaining about the weather, is after all, an important and expected aspect of country life.
There could be no golden autumn without the cycle of spring and summer, but I am loath to see my favorite time of year slide away into winter.