Rounding Out My Week 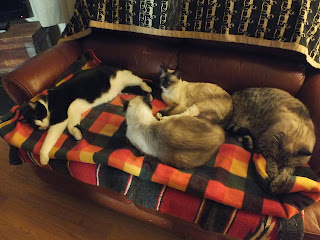 How I wish I could sleep so soundly!
A 'good night's sleep' for me is usually around 5-6 hours.
This week it has been less than that with slumber eluding me til well after midnight.
I daresay my body is staging a not unexpected protest for my perseverance in carrying wood.
C'est la vie!
At this point in life demands are fairly flexible; there are always things I want to do, but as long as laundry is caught up, cats tended and meals prepared, the world doesn't crash to a halt if I need to retreat to my rocking chair with a book and a mug of tea.
With Jim and our grandson beavering away at the wood store I've kept ready the sort of hearty food that can be served on a moment's notice whenever they come roaring in with a truckload of wood.
Thick soups, homemade bread, coleslaw from the crispy garden cabbages, a pan of fudge brownies--these have kept them going. 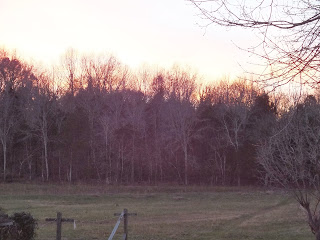 I took these photos as the sun was going down--was it on Wednesday.
The air was already chilly and dark was coming on quickly. 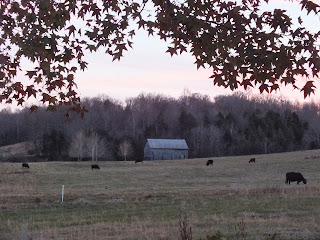 I played with various camera settings but none picked up the colors of the sunset.
I love how the leaves of the sweet gum frame this photo.
Another frosty night has left the leaves crumpled and dull.
They didn't attain their glowing colors of gold and deep red this season, and I miss that. 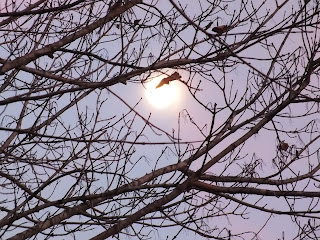 The moon was rising before daylight left the sky.
You can see that the branches on this maple are bare. 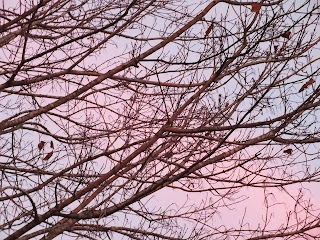 This photo did catch some of the lovely apricot shading in the sky over the pasture to the south. 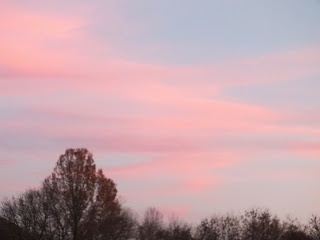 This is the south west corner of the pasture where our property meets the neighboring strip of woods. 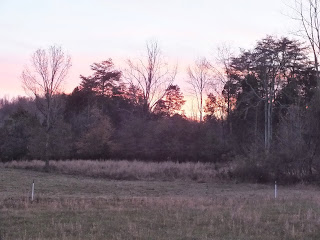 The fence corner a few moments after the above zoomed shot was taken.
I put my camera away, took an armful of wood from the stacks in the carport, and made a fire downstairs.
I got out patterns, tracing paper, freezer paper, an assortment of fine-line markers and colored pencils to prepare for an appliqued quilt.
It is far more tedious doing the prep work, than the actual stitching.
I wasn't pleased with any of my pens. I wanted a fairly thin line, but several of my markers went smeary. The freezer paper shapes have to be pressed to the chosen fabrics and I'm concerned that there will be an inky mark transferred.
I had to several times rescue my 'tools' from the boy cats who thought that pens made a nice clatter when pushed from the table onto the tile floor.
I finished tracing and cutting the paper shapes for a quarter of the quilt--by then I had a definite kink in my neck. The pattern calls for a pieced background.  I've scanned and printed the layout guides and the next stage of the project should be more interesting, actually cutting the shapes from fabric.
I have a lovely stash of fabrics by Kansas Troubles/Moda in my favorite homey shades of dark red, gold, butternut brown, weathered green and creamy tan.
I began collecting them when I worked at the Wyoming quilt shop and have since found a few more pieces from subsequent coordinating lines. 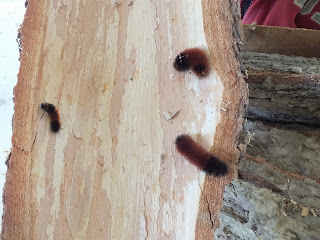 Wooly bears were brought to my attention by Grampa Mac when I was a child.
He shared with me the folklore which insists that the coloring of these caterpillars can be used to predict the severity of the coming winter.
The dark brown ends of the woolys signify cold weather early and late in the season while the comparative width of the orange center suggests the duration of a mid-winter 'thaw.'
The three creatures above were lodged under the bark of a hickory 'log' which I
picked up to bring in the house last week.
The loose dry sheath of bark slid off exposing the wooly bears whom I tenderly conveyed to the leafy shelter behind the evergreen hedge.
I was asked to present a children's story at church this week and was reminded of the experiments which naturalist/writer Edwin Way Teale carried out with wooly bears.
Teale became fascinated by the insistence of wooly bears rescued from the roadway in heading right back in their original direction after being moved to the side of the road.
With characteristic thoroughness, he made over 100 stops to remove wooly bears in danger of being mashed by passing traffic.
He enclosed them in his large hands, whirled them about and set them down; he shook them gently in a paper bag, he drove them in his car miles from their original territory.
He concluded that something in their 'pinhead' brains was programmed to unflinchingly return to their purposeful crossing of the road in a set direction.

It was raining and chilly, nearly evening when I set out to round up wooly bears for my illustration [having learned that the way to captivate small children is to have a 'show and tell' kind of story.]
I located one wooly trundling slowly along in the wet grass outside the woodshed.
Wooly number two was curled in a tight sleepy ball underneath an old plank in a corner of the hay barn.
On my way back into the house I stopped and lifted several small rocks in the area which was planted decades ago with daffodils.  Under the fourth rock was the third sleeping wooly bear.
I found a small stationery box with a clear cover, poked airholes in it and carefully tipped the woolys in on a layer of dry leaves.
I told the children a bit about the interests of nature lovers and naturalists, and from my totebag produced in turn a magnifying glass [the better to examine wooly bears!] binoculars, a 'bird book' and a field guide to wildflowers, all as suggested items which might make the study of nature more interesting.
It went over well.
The wooly bears had waked up in the warmth and obligingly crawled about in their box.
The children touched them with careful delicate fingers.
On my return home I tipped the three caterpillars into the fallen leaves in my herb garden.

This evening has been one when any wild creature, large or small, would need to find shelter.
It was a restless day, windy and too warm for November, grey, misty, humid.
J. suggested that we make a batch of doughnuts--the first of this treat for the winter season.
Rain spattered the windows as we worked. The house filled with the scent of sugar and cinnamon.
The kitchen seemed stuffy. I opened the sliding door to the screens and sat with my mug of green tea and two sugary doughnuts, the sound of the wind swishing through bare branches only a few
yards from the door.
I spent time at my desk in the afternoon, sorting through saved email folders, deciding what to keep, what to delete. Gusts of wind and spatters of rain swirled outside in varying degrees of intensity.
At about 4 PM the automated storm warning rang in on the phone.
Feeling a bit dazed I went to stand with J. at the sliding doors of the dining area. Our bit of the world was wrapped in that eerie saffron hued light that so often presages a bad storm.
M. and G. drove in and dashed into the house through a swirl of rain, M. with his Blackberry tablet in hand.
Their phone and internet service is out yet again, so of course they hadn't gotten the storm alert.
J. pulled up the doplar weather map which shows 'real time' tracking of storms.
It appeared that the high winds and torrential rains were headed directly for us.
The next two hours were uneasy.
I checked the where-abouts of candles and matches.
I refilled the dispenser of cat crunchies in the basement, took down a clean bowl of water.
J. watched a movie on Netflex, turning to his laptop and the doplar map whenever a particularly robust burst of wind hit the house.
He predicted that the oncoming storm would reach us at about 6:15.
"Do you want supper?" I inquired.
"Of course."
I supposed that if we were forced to retreat to the basement it might be as well to do so without hunger pangs. Supper was hasty fare--Campbells Tomato Soup and grilled cheese sandwiches.
As I tidied the kitchen distant thunder rolled along the ridges. The wind wailed and rain drummed on the concrete edge of the carport, lashed against the screen door.
Then the storm was moving on and there was only the drip of rain from the eaves splatting down on the few scarlet leaves which still cling to the burning bush just beyond the step down into the cat's yard. 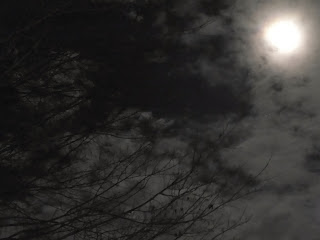 Willis the Cat, who spent the hours of the storm cozied up on a quilt in the basement, requested 'Out, Please' a few minutes after 9.
On a whim I picked up my camera and walked out with him into the still night.
No wind rattles the grey branches of the dooryard trees.
The fallen leaves lay in wet drifts along the drive.
The moon, wearing a sheer nimbus of orange light rides the billow of night time clouds. 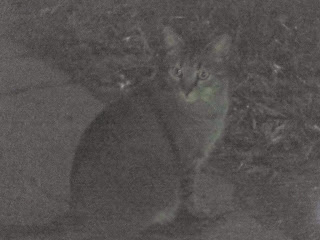 Willis sits at my feet, ears pricked and night-seeing eyes intent on things that I can't discern. 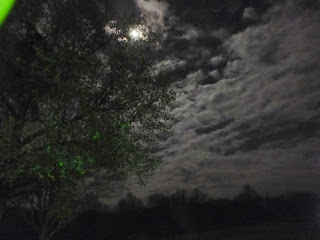 The air is soft, but no longer humid.
The tension of waiting for a storm has ebbed away, even as the thunder disappeared, muttering, into the distance.
We are blessed in safety, yet knowing that the storm which passed us by has brought damage, destruction and even death to others in its direct path.
Life and safety are capricious qualities.