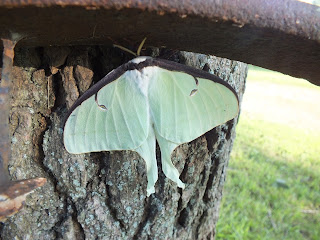 Luna moth, clinging to the trunk of the sweet gum tree.

I like the adjective, 'desultory.'
Its not a word I commonly utter in conversation; it is one that frequently pops into my mind as a way to describe a string of days in which weather and activities conspire to create a rather blurred backward glance of unjournaled time.
[Did we drive to Casey County's whole foods store on Tuesday--or was it Thursday? Which of several days were marked by afternoon showers which halted our outdoor tasks? Did I really spend every evening in my downstairs sewing room--or does it only seem that way?]
We've had visits from family and friends over the past month or so, jolting us from our fairly predictable routines of 'active retirement.' 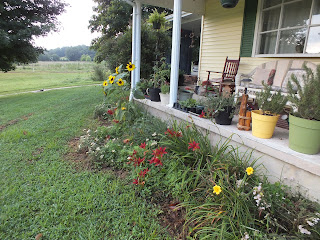 The weather of this summer season--our 4th in Kentucky--surely deserves to be noted as 'fitful.'
Grass, weeds, flowers and garden plants have grown rankly, stems watery and soft with the frequent rains;  temperatures have hovered in the humid mid 80's F rather than the more usual mid to high 90's expected in July.
I have crawled about on soggy ground, cutting back flopping clumps of achillea, daisies and veronica, noting in frustration that areas weeded three weeks ago have been invaded yet again with grassy roots which defy the layers of bark mulch. 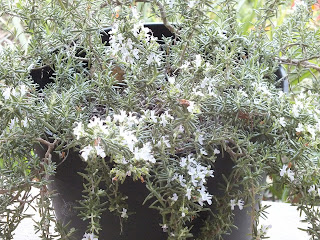 Frequent rain showers have dictated puttering with plants on the front porch
The three large rosemarys which had become shabby and root-bound have responded to larger quarters and fresh soil lightened with the addition of some coarse builders' sand.
I trimmed several inches from the tips of the prostrate rosemary and it rewarded me by producing a cloud of tiny blue-white flowers. 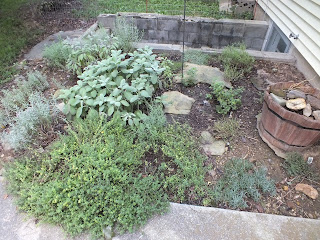 The herb plot by the carport is the one garden where I put down landscaping fabric.
The main exposure is toward the west, with sunlight filtering through the trees from the south.
The herbs are not as happy this year--even this sheltered spot has caught more moisture than woody sage and lavender enjoy.
I've several times trimmed wilting lower stems from the three sage plants--have pruned away some of the twiggy mat of stems underlying the thyme.
The back corner of the herb garden has been dominated by an invasive marjoram cultivar--very lacking in flavor and aroma. I discovered it, along with several clumps of lemon balm, just beyond the box hedge on the south side of the carport and unwittingly encouraged it to flourish.
I don't mind that lemon balm sprawls about, dropping seeds which sprout into tiny plantlets.
It responds cheerfully to severe cutbacks, raising fresh crinkly leaves until blackened by a severe frost.
The marjoram, however, needed to go.
This left me with a bare corner which tends to go dry. I've tried achillea there--it flops over the retaining wall not minding the dry soil, but quickly growing scraggly.  I moved it after one season.
I could simply allow a rampage of ajuga to cover that area.
At the moment a lone foxglove is struggling there, its companion uprooted by a naughty cat.
While 'digitalis' fits with the theme of a herb garden, I'm sure if it survives the winter it should have a home in moist shade.
The spring was so prolonged and chilly that I didn't plant up the wooden tub to basil and cilantro.
I have a collection of lavender seedlings on the porch, too fragile yet to put in the ground.
Is any garden ever finished? 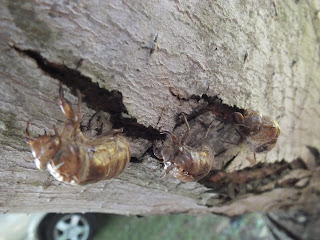 July is the month when the cicadas emerge, leaving their bronzed crackly carapaces caught in the bark of the dooryard trees.
The 'shells' are complete with legs and eye sockets giving the appearance of empty armor.
Their scraping sound is loud in the evening dusk. 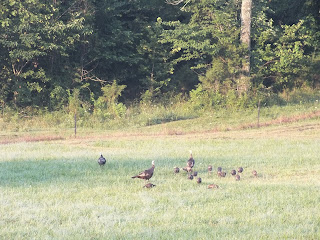 I stepped outside early on Friday morning and noticed an adult turkey eyeing me warily from behind the garage.  The flock had gathered and was trundling determinedly toward the woods when I returned with my camera. 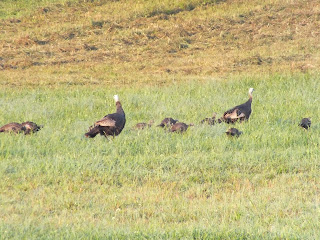 Turkeys are not at all cooperative subjects for photos.
These are two of my better zoom shots.
In one photo I counted 17 turkeys, there may have been several more.
The youngsters scudded along, heads close to the grass. 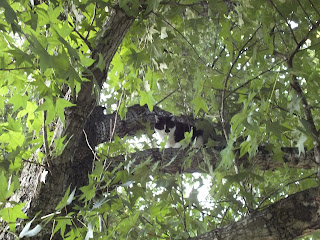 The 'bully boys' were underfoot as I walked across the back yard, although they were wary of accompanying me as I paced up the field for a closer view of the turkeys.
Bobby scrambled up the sweet gum tree and maintained a watchful surveillance until the turkeys disappeared into the cover of the woods. 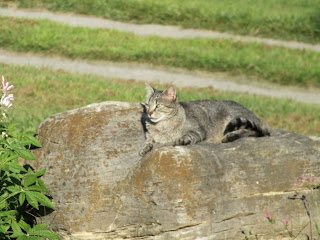 Willis the Cat takes his duties as guardian of the dooryard very seriously.
He watched the turkeys stroll past, then claimed occupancy of a comfortable folding chair in the carport for most of the day.  He was present while I ate a lunch time sandwich on the front porch and noted the pair of goldfinches bouncing and pecking on the head of a dwarf sunflower only a few feet away.
He strolled behind Jim on his rounds of the garden, bringing up the rear, keeping an avuncular eye on the antics of the boy cats, administering a disciplinary swat as needed. 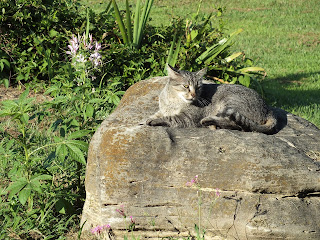 It would seem that a fellow could have a few moments peace on his favorite rock without the farm threatening to go to hell in a hand basket!
Arrivals and departures of neighbors demanded supervision;
Jim's trip to the upper garden to pick sweet corn for supper prompted Willis to tag along, diving into the rows of corn, popping out between the stalks, making sure that no beast, bird or insect lurked undiscovered in the rustling green leaves. 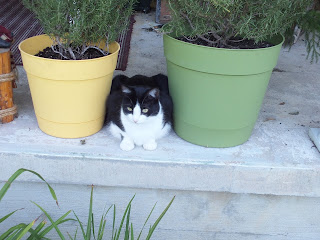 Edward [who can no longer be designated as 'Little Edward'] takes no responsibility for the welfare of the farm or its occupants.
He is lazy, very stout, companionable and utterly charming. I intended to cut down the toppled sunflowers, but didn't accomplish that between the frequent showers that pelted down last week.
Oddly, although the bent stalks are cracked and split, several of the damaged plants are opening blossoms even as they sprawl prostrate across the neighboring cosmos and zinnias. 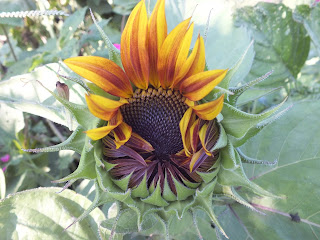 Sunflowers are intriguing in bud, in full bloom or as the tightly packed seed heads mature. 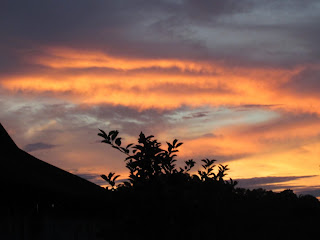 As the hours of Friday dwindled into evening, we declared our work week done.
I sank gratefully into the chair in the carport, my lap immediately appropriated by Edward who landed there in a weighty, purring sprawl.
Jim let down the tailgate of his vintage pickup and sat there, feet swinging.
In the back field Edward's brothers, Nellie and Bobby, trolled through the rough grass, pouncing on fireflies, turning to chase each other madly.
Nearer the dark line of the woods, Charlie-cat prowled recklessly, his pale-furred shape unmistakable in the growing dusk.
Thinking to avoid the usual late evening round-up of cats, I called them.
All three turned and raced, pell-mell, down the field toward the carport.
Low overhead a cronking call brought us all to attention.  Willis rose on his tweedy haunches, ears pricked. The call came again, accompanied by a soft beat of wings as the blue heron who lives across the creek cleared the sweet gum tree and flapped homeward, long neck stretched in front, slender legs under-lining his tail fathers.
In the darkening field a rusty brown shape slid into view, ambled along the shallow ditch, pausing to sniff.
I handed Jim the binoculars which we keep on the porch.
'A coyote,' he announced, confirming my thought.
I looked at my cats who had so recently been in the field, surely vulnerable to the wiles of the coyote.
I rose and bundled the boy cats hastily through the kitchen door.
Willis sat alert and watchful, yellow eyed, lean, wise with his seniority of three previous summers.
As though satisfied that the dooryard was, for a time secure, safe from prowling coyotes, low-flying birds and invading turkeys, Willis landed gracefully in my vacated chair, rested his pointy face on his tweedy paws. Beyond the circle of the dooryard light fireflies danced, tiny lamps flashing, and the rasping whir of the cicadas welcomed the night. 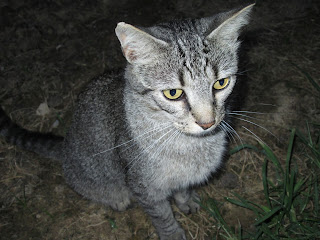 Posted by Morning's Minion at 5:48 PM