A Bit of Silliness 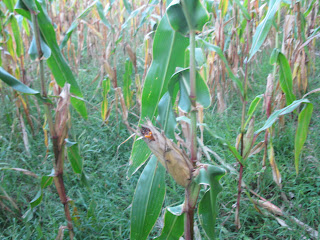 After a damp and rainy start to the day, afternoon brought warm sunshine and puffy white clouds
drifting on a blue sky.
J. and M. were away, so I enlisted daughter G. and grandson D. to help demolish the left-overs from last night's roast chicken and fixings.
We made short work of the food and D. suggested we trek down to the creek.
Big Creek has recovered from the drought of August and its rippling surface mirrored the sailing clouds and the lazy downward spiraling of yellowed leaves.
G. is on a binge of decorating her porch in autumn  finds, so we gathered vines to be twisted into wreaths, picked up glossy acorns, judged the merits of various seedpods and grasses which might
be dried to add to a display.
I suggested a few ears of field corn could be tied into a spray for the front door and we were off, boots swishing through the tall dank grass, jewelweed and boneset which line the shallow ditch between the barns and the 15 acres leased out to corn.
. 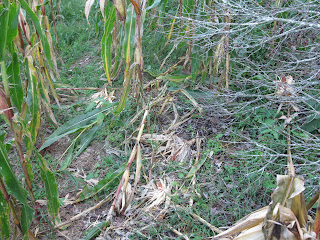 I wasn't surprised to see that stalks on the outer edges of the field have suffered damage from wild animals.
It is racoons, and possibly possums, who topple the stalks so that they can feed comfortably on the kernals of drying corn.
D. pointed out that it would be deer who stripped back the husks and nibbled at the ears of corn, leaving the stalks upright.
Shouldering our way into the interior rows we found any number of places which bore the evidence of
four-footed diners. 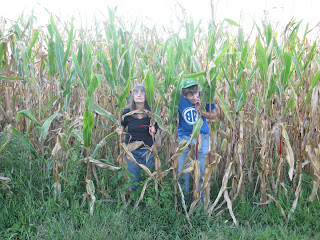 Then---we all got purely silly.
[Be it known that I am usually of a fairly sober turn of mind.  If anyone can inspire me to sheer foolery, it would be G. and D.]
D. and I clown at the edge of the corn field.  I have my trusty garden clippers clutched, ready for action. 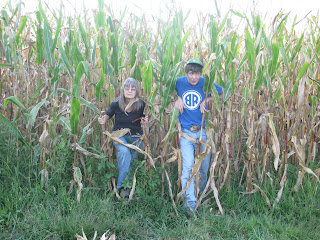 Look out--we're on the prowl! 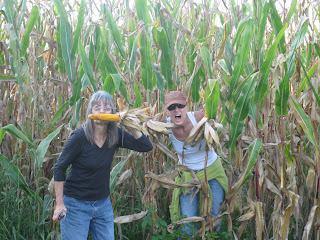 G. put down the camera and plunged into the thicket of corn
providing me with inspiration! 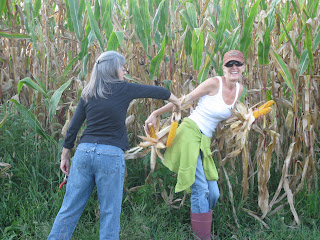 G. had bundled up her ears of salvaged corn when I reminded her that there was apparently
a tradition of poor country people using corn cobs in lieu of fancy toilet tissue.
She struck a naughty pose while I threatened to administer discipline. 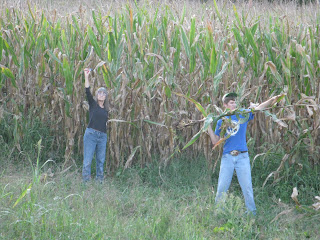 A salute from Cornfield County!
[Anybody remember Hee-Haw?] 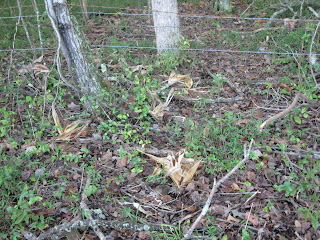 The long edge of the cornfield borders the neighboring woods.
Here it appeared that raccoons had chosen their corn and carried it from the field to enjoy at their leisure
in the shelter of the vine-draped trees. 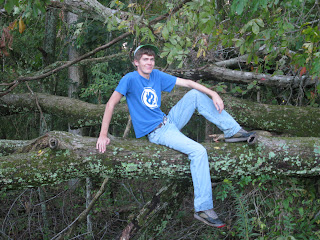 A tree had toppled near the fence line since I have walked there.
Its lichen covered trunk was an easy vault for D. 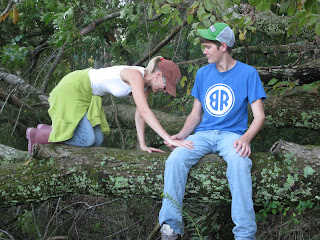 G. decided to join her son on the damp lichen-slicked trunk and began crawling from the broken end which rested in the tangled grass. She got part way across, looked down the four feet or so into the ditch and got the wobbles. 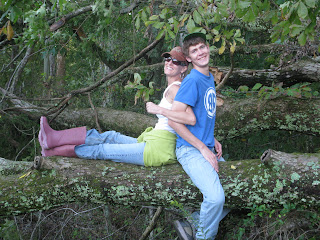 Mother and son share a love of ridiculous posing.
[I could be prejudiced in thinking they are a good-looking pair!] 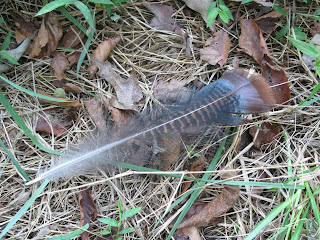 We often see wild turkeys hurrying across the back pasture and I hear their wittering calls from the darkness of the woods.  Today I found two beautifully marked bronze feathers.
I daresay the turkeys are pecking up the corn kernals which the other animals
carelessly scatter. 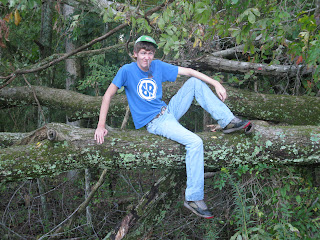 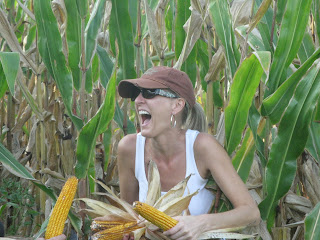 As G. says, it doesn't take much to entertain us country folk! 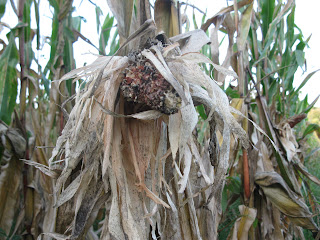 The husks on this ear of corn had been pulled back--whether by hasty scrabbling claws or the
determined teeth of a deer. 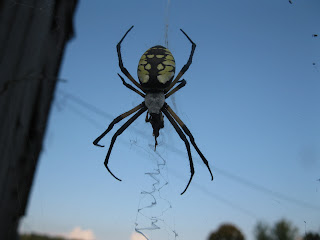 It was already cool in the shadows cast by the two old barns.
D. discovered this garden spider who has strung her web between an upright edge of barn siding and a sturdy stalk of grass. 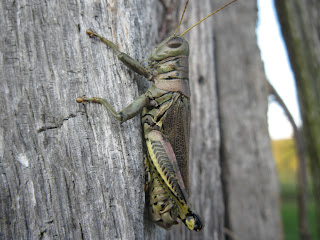 This grasshopper, his armour blending with the weathered boards
had no idea that he was enjoying his last moments of life. 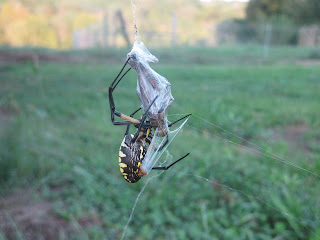 The spider packages the unlucky grasshopper in a mesh of sticky thread. 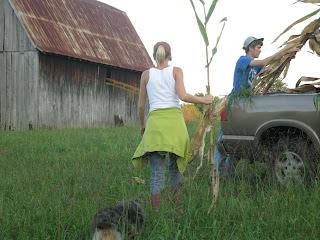 Tex-the-Dog plods after his family as they load their decorative harvest in the back of the truck.
With the sun sliding behind the woods the air was growing cool
and we reluctantly headed back to our two welcoming houses.
Posted by Morning's Minion at 12:16 AM