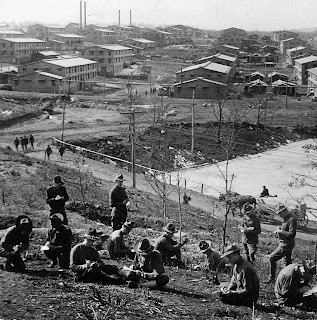 A photo from 1917 shows the hastily constructed enlistment camp at Ayers, MA. 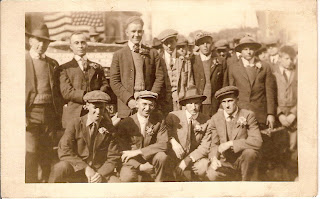 A company of draftees and enlisted men from Warren and Essex Counties in upstate New York. Families, sweethearts and friends gathered for a send off; flags waved, there were patriotic speeches.
Lawrence Henry Ross [g-uncle Lawrence] is second from left in the front row. Third from left is a man who appears in a number of photos in our family collection. We don't know his name.


Here is my address
Lawrence Henry Ross
Company F 303 Infantry
Camp Devens, Ayer, Mass
Be sure to write just as soon as you can.
Lots of Love, I’m feeling fine.
Your son,
Lawrence.
Go to http://www.gjenvick.com/CampDevens/1918-TownAndCamp.html to learn more about Camp Devens.

Posted by Morning's Minion at 2:45 PM