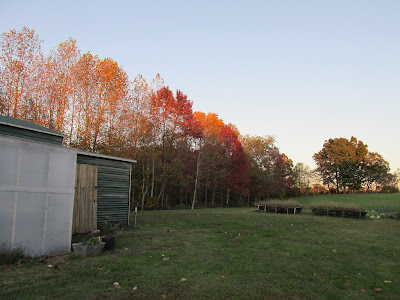 A light and windy rain last evening just at dark brought down leaves along the lane and the rims of the north and south ravines.
The garden and east meadow were already in shadow when I went out at seven this evening to drape old towels over the green beans which are still providing us with fresh veg.
I moved geraniums into the sun room, along with a pot of nasturtiums.
Dawn harvested the remaining green tomatoes at the Dry Creek garden yesterday and they are in rows on the west porch covered with a fleece blanket.
There is a chill in the air and the warning of possible frost in the hours before daylight.
September frost was the usual in my native Vermont; early morning outings saw neighbors' window boxes and porch planters draped with old pillowcases or towels while a sprawl of faded sheets or bedspreads covered vulnerable rows of tomatoes.
Inevitably there came the afternoon when we knew that 'killing frost' would move in shortly after nightfall.
Green tomatoes were stripped from the vines, spread on kitchen counters, lined along windowsills, laid out on newspaper covered tables in back entries or pantries.
The last fall flush of blooms came inside to be crowded into the McCoy vases, ceramic pitchers, small jugs and mismatched creamers.
The straggling vines of nasturtiums were clipped and brought in to be stuffed into mason jars, their pungent cool scent vying with that of a few roses tucked into vintage teacups.
In my childhood I crouched in the bed of the horse-drawn wagon when Grampa Mac harvested the field pumpkins and the knobbly Blue Hubbard squash. These were arranged on the south-facing covered porch of the farmhouse to 'cure'--if frost threatened horse blankets were brought to cover them. Soon these would be carried to shelves in the dirt-floored cellar, joining the earlier harvested potatoes heaped in their wooden bins.
The morning after that killing frost is one of gentle sadness as the slow sun climbs the sky revealing blackened tomato and squash vines, shriveled bean plants, limp masses of sodden stems where only yesterday there were blooming plants.
To everything a season.
After the brief mourning for the ending of another growing time, we gardeners turn to the final clean-up for the year.
Choosing a mellow afternoon we work under the slanting autumn sunlight to yank up spent vines, trundle them off to the trash pile or compost heap; in the greenhouse pots and trays need to be sorted and stacked, trowels and diggers wiped clean and put away.
Here in Kentucky grass will need to be mowed through the end of the month.
As these tasks wind down and the days grow shorter, we  pull sweaters and down vests from the closets, spread an extra quilt at the foot of the beds.
Working outside at mid-day is still pleasant if there is sun, but the east porch no longer invites as a place to sit with a book and a mug of tea.
With the labors of the garden over for another season, I am more aware of the pantry which needs to be re-organized, my craft area downstairs that needs a good sorting.
Sewing/quilting projects laid aside in April will soon invite my attention.
As I finish writing at nearly 9:30 P.M. the outside temp has fallen to 46 F.
It was dark and chilly an hour ago when I picked my way across the back yard to fling corncobs and beet peels into the garbage pit.
Opening the door to go out I surprised a possum gobbling kibble from the outdoor cats' dish.
I yelped in surprise, the possum glared at me, then scuttled off with Dixie-the-dog in indignant pursuit.
The cats have gone to bed, the house is quiet.
Sunrise will tell the story--whether the frost has come--or we have been spared for yet a few more days. 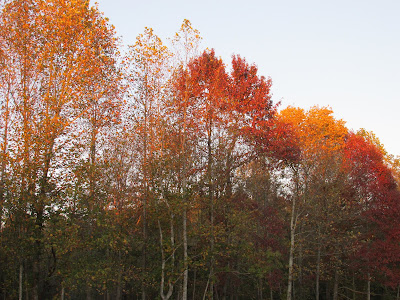 Trees along the north edge of the property as it slopes into the ravine. 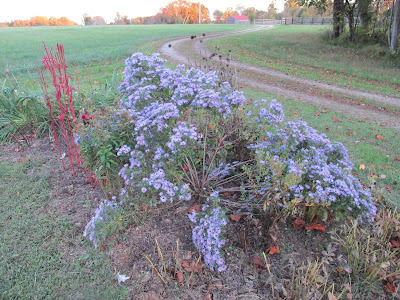 Wind and rain have splayed Raydon's Purple Aster
That is one plant. 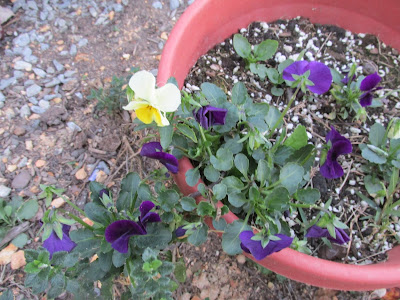 Spring violas self-seeded in this pot--too many to grow on properly.
These are the cheerful survivors. 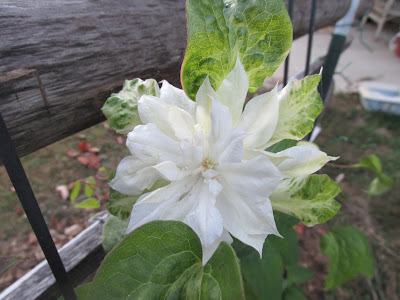 A late bloom on Duchess of Edinburgh clematis.
The sepals are strangely distorted and mottled. 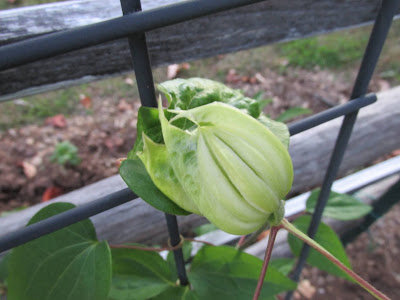 This bud--if spared by frost--looks like it will open with the same odd markings. 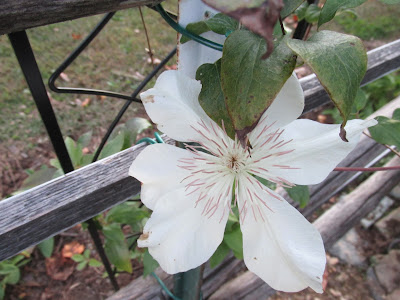 One final blossom on my favorite, Candida.
Posted by Morning's Minion at 9:45 PM

Word verification necessary at this time to hopefully filter a spate of nastily explicit spam. If that doesn't catch it, I will temporarily disable comments. Many bloggers report an increase in this since the new format became default.