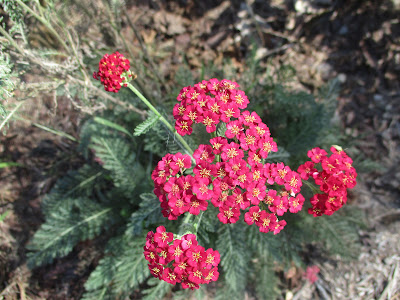 In the space of a week, the season has moved from seemingly endless summer heat to temperatures more representative of fall.
The first Friday of October dawned cool and warmed into a mellow sunshine that lured me outdoors. 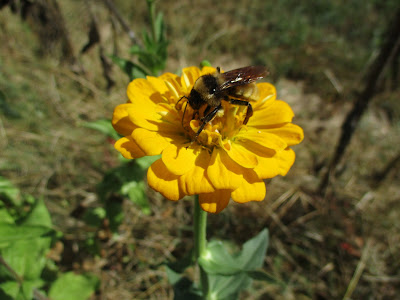 I invented tasks beyond the usual watering of plants and the trek to the mailbox. 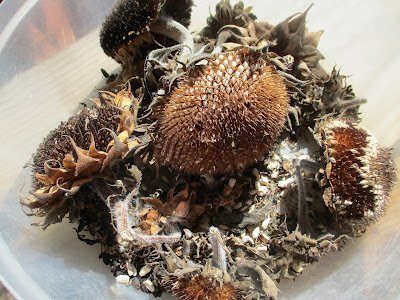 I harvested heads of sunflowers--all dwarf varieties--and will have far more seeds than needed for next season's planting.
Although the sunflowers now look spent and straggling I've asked Jim to leave them standing so that birds can continue to glean seeds. 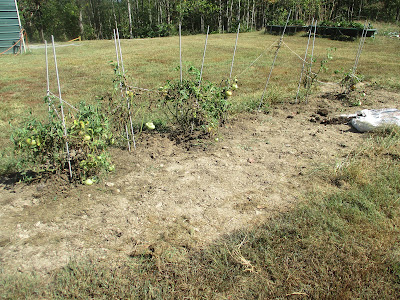 I forked up the grass and weeds which edged this plot--a heavy job with the ground so dry.
A few late tomatoes still ripening, so the bedraggled plants were left for a few more days. 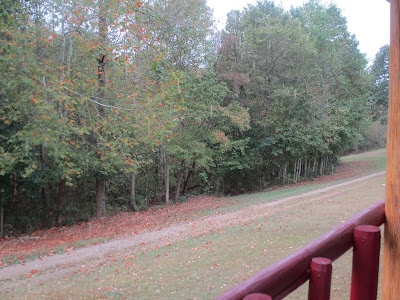 Intermittent showers on Sunday which tantalized  with the hope of rain.
At dusk it began to rain, a solid drumming on the roof which continued through the night and into Monday morning.
The cats darted out the door, came back damp, disgruntled, shaking wet paws.
After weeks of dragging a hose about to water gardens it seemed strange to have nature attending to that need. 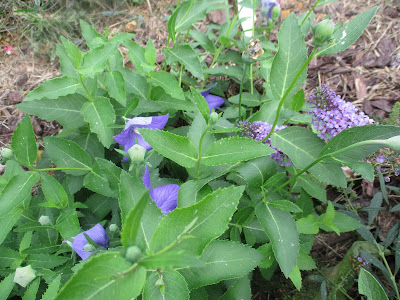 Prodding experimentally in the soil around the transplants of foxglove and balloon flower  near the back porch, I realized that the moisture had soaked in deeply.
I cut half-opened blooms of David Austin roses, the petals cool and freshly sweet. 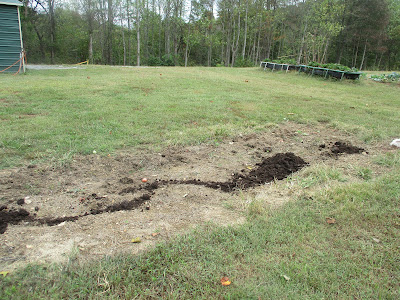 Yesterday [another Friday] I picked the remaining late tomatoes, yanked up the plants, spread out a bag of mushroom compost to await Jim's work with the Troybilt tiller. 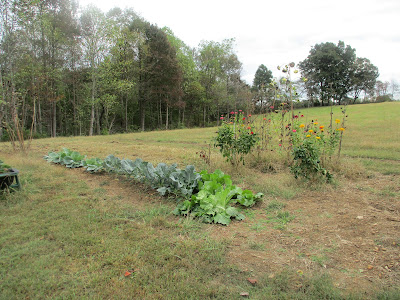 The veg garden after bush-hogging--cabbages and broccoli responding to rain and cooler weather.
A few zinnias and the sunflower stalks have been spared. 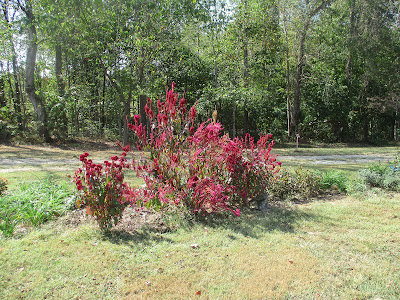 Cockscomb rode in from the farm--stow-away seeds dropped into the potted perennials that I hastily stuck in the ground here a year ago.
I think there are two varieties--you can see that some of the plants are taller and tasseled, while others are more compact with the dense flower crests that give the plants their common name.
Prior to the rains they were still appealing. 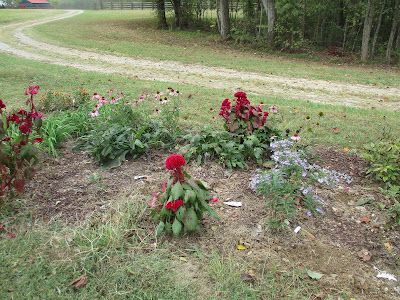 After the rain, the tall cockscomb were leaning, well past prime and shedding seeds by the thousands.  I uprooted them--the lower stalks as thick as young saplings--and carted them off to the edge of the woods.  Tiny black seeds caught in my shirt, clung to my bare arms, sifted down my neck.
I left the low-growing plants for a few more days of brilliant color.
With the towering ones gone, I could begin to clear weeds. 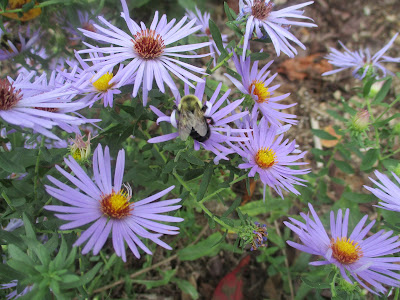 Raydon's Purple asters;  I will order several more of these in the spring. 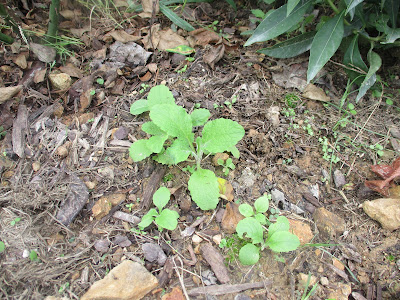 I have watched for new seedlings to appear at the base of the Camelot foxgloves. Before the rain there were only a few--the larger ones in the photo.
Kneeling on the damp earth on Friday I discovered  tiny seedlings --dozens of them--marking where each plant bloomed in the spring. They are late-comers--how many will survive the winter?  With their biennial tendencies, I hope to keep a new crop each season.  I should have bloom from those started from seed and nurtured in pots through the summer. 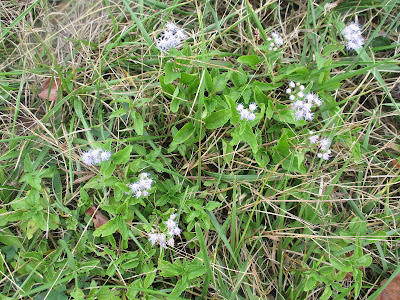 A clump of wild ageratum along the lane. 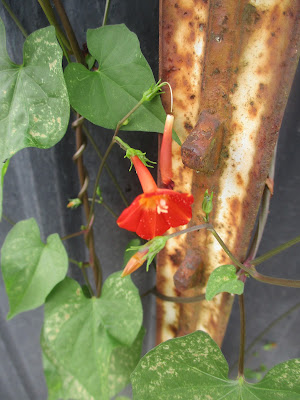 Ipomoea Coccinea
Discovered growing up a rusty fence stake beside the old barn at the end of the road.  One of the common names suits it: 'red star.'
Tonight the temperature is expected to plunge into the 30's F--not a frost, but a chill that will proclaim autumn is finally with us to stay.