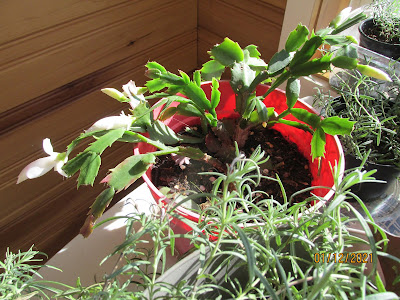 This cactus bloomed at Thanksgiving, and now in January
Two stunning days of sunshine, so welcome after a mostly grey and chilly month thus far.
Morning temperatures have been in the mid-20's F, the grass crisped with frost.
January has always been for me a contemplative time, a quiet hibernation of sorts, with the prime effort one of keeping warm.
Living now in south-central Kentucky we don't experience the long weeks of severe snow-bound cold.
The days without sunshine are damply chill, a sameness of colorless skies and bleached meadow grass. 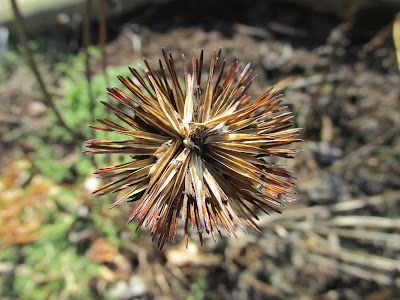 Coneflower seed head.
When the sun shines I walk the perimeter of the meadow and notice that beneath the yellow-beige spears of grass there is still green.
Three of the cats, Robert, Nellie, and Willis, are intent on patrolling a specific area of the meadow, crouching for hours in the cold, shoulders hunched, eyes fixed in the hope of an unwary mouse appearing.  I have several times seen one of the cats strolling down the driveway, prey dangling helplessly.
The juncos and bluebirds , though avidly stalked, seem to have a built-in wariness as far as the felines are concerned. 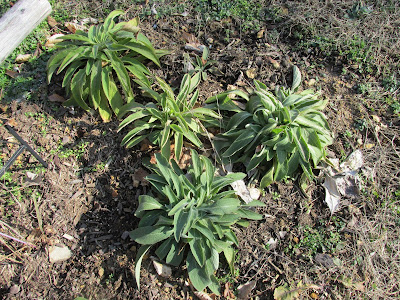 Established clumps of foxglove are wintering.
In the west wall garden at least two dozen self-sown seedlings are with-standing the cold nights. 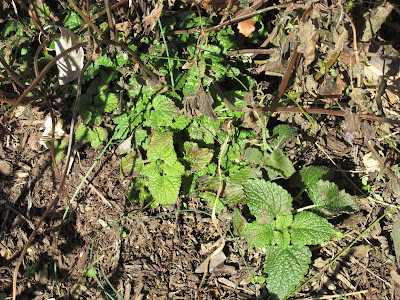 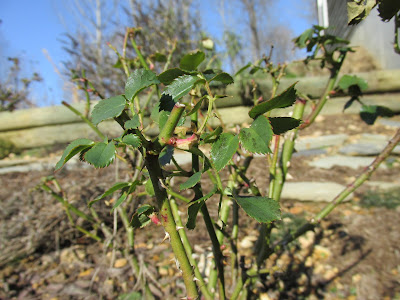 The shrub roses in the west garden foolishly insist on thrusting out new leaves. 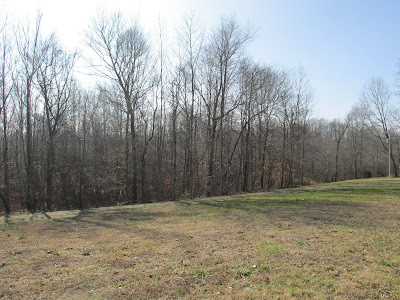 The rough turf of the lower meadow, patched in subdued green and brown.
On the days when the wind doesn't bite cold, I bundle up and stomp around the perimeter of the property, sometimes only once, more often two or three rounds. We own slightly more than 20 acres, bounded on the north and south by deep ravines tangled with undergrowth of briars. I don't venture down onto the prickly slopes. 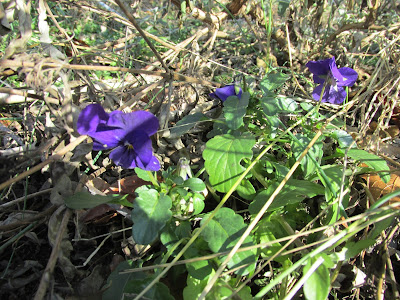 Violas sheltering under the sere stems of buddleia. 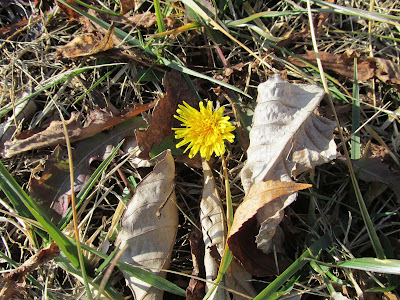 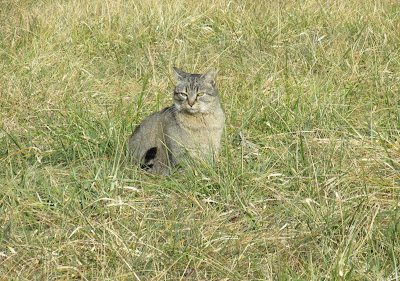 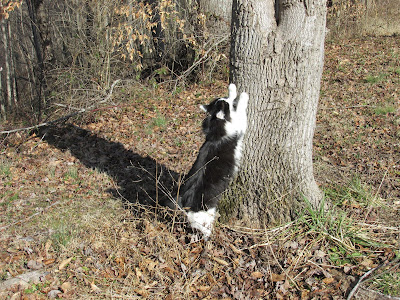 Robert, strolling along the edge of the ravine with me, stops to hone his claws on a convenient tree trunk. 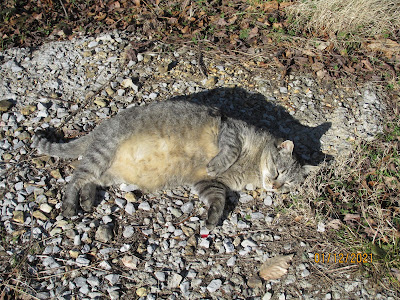 Willis takes a break from hiking to roll on the gravel in front of the old shed. His shadow gives the impression of another cat mirroring his every move. 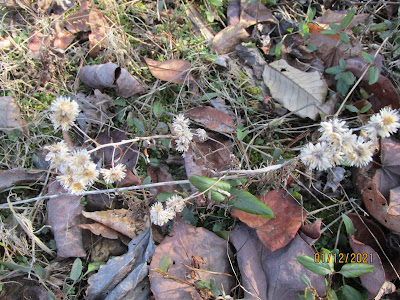 The mid-winter days move quietly, a quotidian round of simple chores and brief errands--a contrast to the uproar of contentions and accusations that daily bombard us with conflicting reports.
I've spent a week squinting at vital stats written in French, learning more about the Canadian families of my paternal bloodline.
I've read my way through the first three Brother Cadfael mysteries and into the fourth book.
Seed racks are out in the aisles at Wal Mart; nearly a dozen nursery and seed catalogs have landed in my mailbox.  I think about gardens, note the perennials I hope to start from seed, the new to me varieties of tomatoes which suggest resistance to blight.
I read news reports and opinion pieces.
I can do nothing about the troubles that beset our country.  I increasingly lack faith that those in control will work honestly and effectively.
So, I plod along through these chilly days that comprise the mid-winter of my years--hoarding the sudden piercings of joy--two sightings of the barred owl this week; the mist of tiny blue blossoms on a rosemary plant; the devotion of my cats;  the smooth taste of chocolate, the comforting clasp of the tea mug that fits my hand.
There is a certain reassurance in the sense that the seasons continue to move in response to an eternal plan--Something beyond the sorry disruptions of feeble humanity. 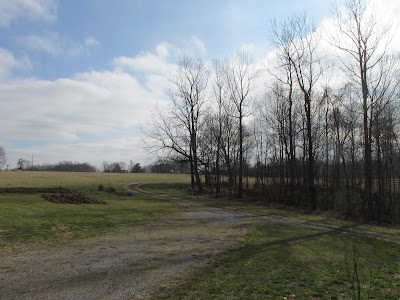