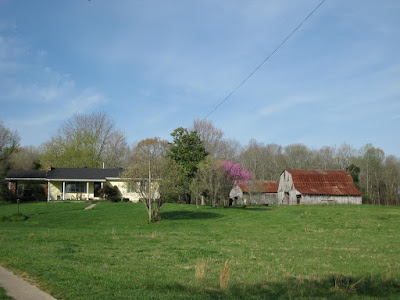 We had been contemplating retirement for more than a year, and had spent hours online viewing properties in North Carolina, Tennessee and Kentucky.
It quickly became evident that Kentucky won in terms of affordability.

With our last Wyoming home sold during the final week of February, we loaded our car onto a trailer behind old Snort'n Nort'n [the '92 Dodge truck] and headed east.

Hours of comparing properties had narrowed our list to roughly a dozen, mostly in Adair County, Kentucky. We had been in email contact with a realtor; I printed the listings which appealed to us, stuck the wodge of papers in my small suitcase.
We had reserved a motel room in Columbia, KY to serve as our base for a week.
We wanted a country property with acreage, probably one in need of renovation.

As usual on a road trip, Jim pushed along for many hours.
The bottom land along the North Platte River was clustered with thousands of sand hill cranes and Canadian geese, not quite ready for their migration north.
Stretches of farmland in Iowa and Illinois lay sodden in the grip of late winter; white clapboarded farmhouses stood bleakly behind leafless windbreaks.

Jim timed our pit stops so that we would hit the biggest cities at other than rush hours.
The truck had been serviced a few days before we began our journey, but disconcertingly the headlights began to falter when we were about 40 miles from our destination.
Reaching Campbellsville about 10 o'clock at night, we decided it would be prudent to find a motel there, rather than blunder along unfamiliar roads, risking the truck quitting.
Jim was ruefully sure that the alternator was giving out.

In the morning we limped into Columbia, located our motel and discovered an automotive repair shop just down the street.
With the truck delivered for repairs and our car unloaded from the trailer, we set off to meet the realtor.
Two days spent looking at our previously selected listings were disheartening.
While we had stated that we were up for renovating a house, several proved to be dilapidated beyond reasonable help. One that had seemed appealing proved to be situated too near a highway.
An Amish farmhouse was an attractive possibility--except that it had only a small plot of land.

Abandoning our prepared list, we spent evenings in the motel searching online and in local papers for alternative properties, deciding that we would need to move into a higher price bracket.

Accordingly we viewed a nearly new log home, very similar to what we had built in Wyoming.  Even the kitchen cabinetry was the style and brand we liked.
There were only 5 acres and it was on the outskirts of a busy town.
It seemed the best option we had found, and yet---

Back in town that evening, Jim learned that the truck repairs were done, a new alternator installed.  He walked down the hill to retrieve the truck while I let myself disconsolately into the motel room.
I was tired from the long trip east, stiff with days of riding, a bit discouraged with house hunting.
Jim appeared, waving a business card; it seemed a local farmer had come into the repair shop, noted our truck with out-of-state license and learning that these visitors were looking for a rural property, had handed over his card, announcing to the proprietor, "Tell them I have a small farm for sale!" 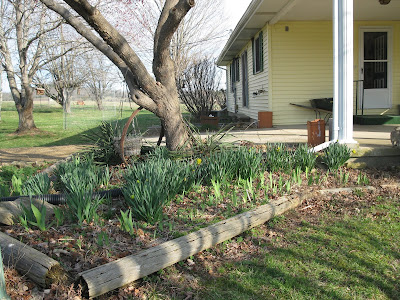 Jim punched in the phone number on the card, made arrangements to meet the farmer in half an hour--when he had finished feeding his herd of Black Angus cattle.
Over-tired, mildly cross, I grumbled that I didn't have the heart for another 'viewing' that I felt would surely be disappointing.
In the end, of course, I put my shoes on again and went.
We met the man, Mr S. at his immaculate farm, he climbed into the back seat and directed us a few miles onto a side road.
Within a few minutes he told us to slow as he pointed out the boundaries of a 28 acre property;  a small yellow house sat at the top of a gentle hill, with two weathered barns in the back.  As he related the history of the little farm which he had acquired at auction a few months earlier, I stared at the house and the already greening meadows.

The house was small, 30 years old and built in the style referred to as 'ranch.'  It had never occurred to me that we would live in a house of that type.
The garage/shop was likewise small.
Still, the house had a few nice custom touches--a fireplace, a bay window, a built-in cherry sideboard in the tiny dining area. There were only two bedrooms, but surprisingly, one of them was big enough to accommodate our king-size bed and dressers.
Jim and Mr. S. walked the boundaries, inspected the weathered barns, while I pondered the house, trying to think where furniture could be placed.
Mr. S. had pointed out the towering magnolia tree at one side of the house, named the nandina shrubs along the porch, indicated the emerging daffodils that grew by the carport.

We were offered the key with an invitation to return in the morning, to view the property in daylight.
We did so, roaming through the house again, noting the updates needed--new kitchen cabinetry and appliances, removal of dingy carpets, fresh paint.
Outside the sun glowed in a bright blue sky, highlighting the reddish buds on the dooryard maples.

Returning the key, Jim and Mr. S. shook hands, agreed on a price;  title search and closing details were arranged.
We would return in two weeks with our worldly goods to take possession.

When the morning of our cross-country move arrived, clouds hung over the Wind River Mountains of Wyoming.  The cold tang of coming snow was sharp. Our household goods, Jim's construction tools, had been loaded three weeks earlier.  The new owners of our home had graciously invited us to use the tiny guest cabin until we were ready to leave.
Jim parked our motor home close to the door of the cabin and one by one I carried out the cats, closing them into the bedroom area with food, water and litter box.
The old horse was coaxed into the horse trailer and it was hooked behind the motor home.
Our son and our nephew were driving with us, Howard in the red Dodge pulling the trailer loaded with household plunder, Matthew driving Snort'n Nort'n and towing the tool trailer.

Leaving is always hard. We had said goodbye to dear friends; our daughter and her family were staying in Wyoming.
Our little convoy lurched onto the main road, Jim in the lead.
I sat on the sofa in the middle of the motor home.  I did not look back

It was a horrendous journey.
The impending storm caught us before we reached the Wyoming/Nebraska border.
It swept across the Great Plains in a howling blizzard of snow, sleet, ice.
Road conditions were too bad to drive late at night as we would ordinarily have done.
The elderly horse needed to be walked whenever we stopped to eat and fuel up.
Slowed by the loaded trailers and the wretched weather we lumbered across the mid-section of the country, the journey taking a day longer than planned.
On Sunday, 21st March, 2010 as we reached the eastern border of Indiana, the pelting snow became a mizzle of rain.  Into Kentucky, where verges and fields lay green, dotted with the gold of wild daffodils.
Turning onto the road leading to the little farm, we met an Amish buggy.
A neighbor, friend of Mr. S. had been in to turn up the heat; the little house welcomed us.
The sun was not shining, but the rain had stopped.
Cardinals bounced in the shrubbery near the back sliding door, darting anxiously away as I carried in the traumatized cats. I held each one close in my arms, singing softly. 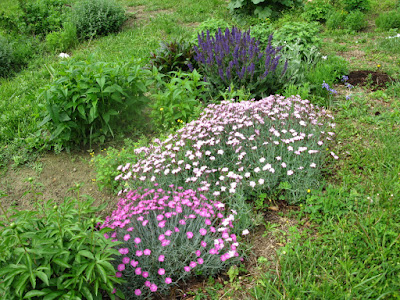 It took us about six weeks to complete the most urgent renovations--replacing ugly stained carpet with pre-finished wood flooring, installing a new kitchen, setting up new appliances, creating a laundry area in the basement. Other improvements indoors and out were ongoing.
All around us springtime burgeoned--redbuds and dogwood in bloom,
The earlier owners had been gardeners.  I discovered peonies, clematis, iris demanding to be divided.
We made a huge vegetable garden, set out berry plants.
I created a beautiful perennial garden.

I thought we had found our 'forever home.'
We stayed there four years, often finding the house rather a tight fit, the workshop space inadequate, but loving the land.  We discussed building an addition to the house, enlarging the shop.
Ultimately, we swapped the little farm and house for a large Amish property--but that is another already documented adventure in renovation.

I dare to believe that we are--finally- in the home place that will 'see us out,' this house that Jim and Howard designed and built.

Recalling that late winter move from Wyoming, sifting through the photos of my first Kentucky gardens, pondering all that has happened in ten years, is a mental journey of sorts, one that inevitably tugs at the heartstrings.
Who knows if we will have ten more years?

Whatever the allotted span, we will go on gardening, cherishing the company of our pets, involved with family and friends, attending church, marveling at the turn of each season.