The Sad Passing of Charlie-Cat 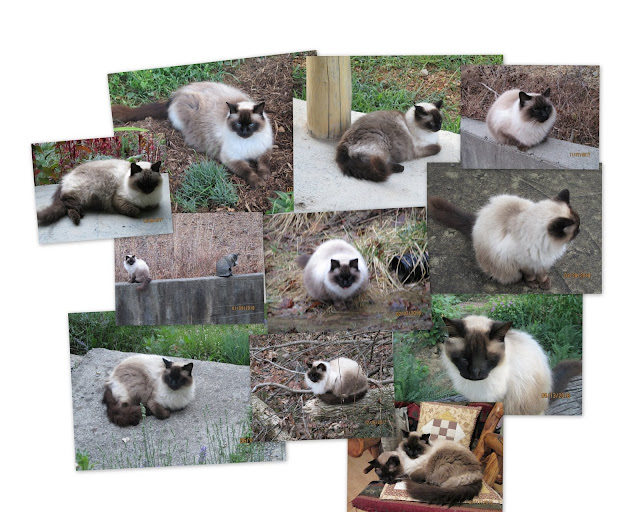 It has been a week this morning [Thursday] since I found Charlie's lifeless body stretched behind the house.
Friends on Face Book know something of the sorry tale; kindly messages have been a comfort.
What J. refers to as a 'rogue pack of dogs' came through a little before last Wednesday midnight, just as we were falling asleep.
We don't know if they were coyotes or simply dogs running loose. By the time Jim got outside with a powerful flashlight the last canine--brown and white spotted-- was disappearing into the ravine.
We didn't know until early morning that in their mad yapping dash the dogs had cornered and mortally injured our Charlie

We shared the task of digging his grave, next to that of his daughter Mima who died 1 February, 2019.  I wrapped him in a thick towel, and when we had covered him with earth I built a cairn of stones to protect the spot.

Charlie was a buffoon--a 'village idiot' personality; noisy, demanding to be let in and right back out numerous times each day and evening.
Attempts to keep him in at night resulted in his rampaging through the rooms, yelling in his silly loud voice until one of us stumbled from bed and escorted him out the door.
He wasn't 'bright'--he guarded the water bowl, sloshed its contents over the floor.

Charlie was companionable, a gardener's helper, a lap-sitter when it suited him. He knew that our dear daughter-in-law adored him--and he made the most of her visits.

Those of us who have pets--dogs, horses, cats--know the grief that is shared without boundaries when a loved creature dies--the more so when that death has been a violent and sudden end.

No pet should be terrorized and hurt in its last few moments.

We have anguished over whether we could have saved Charlie had we been awake and more quickly realized the danger. We want to believe that his pain was brief.
The house is calmer without his bustling busy presence, but he is missed. 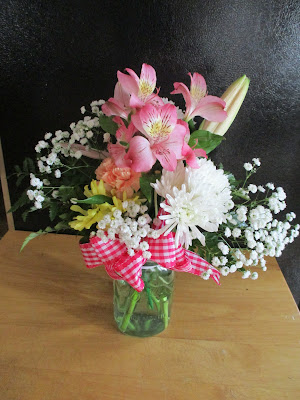 Our daughter brought flowers--a tribute to Charlie-cat and to our loss.
Posted by Morning's Minion at 6:36 PM